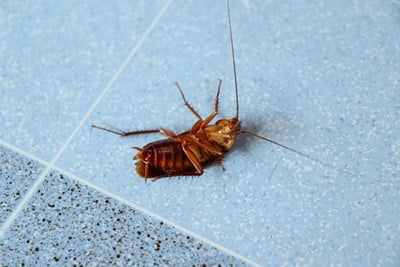 Roaches are among the most common household pests, and, perhaps worst of all, cockroaches are difficult to kill. Roaches are so resilient that they can regenerate lost limbs and survive for a while after their heads are decapitated.

Cockroaches are tough, resilient pests that are hard to kill. They can withstand radiation doses that are 10 times higher than humans, and they’re becoming immune to pesticides. Their genes have evolved to give them a heightened sense of sight and smell, enabling them to avoid threatening and dangerous situations.

If cockroaches get into your home, you’ll want to find a way to remove them. But as the pests are so tough to kill, that’s not easy. To complicate matters, roaches play dead. So, why are cockroaches seemingly invincible?

Can You Kill A Cockroach by Stepping on It?

As reported in the US National Library of Medicine, cockroaches can withstand forces nearly 900 times their body weight without injury. While they may look soft, their exoskeletons are strong and flexible.

The exoskeleton is comprised of a series of overlapping plates that are connected by a stretchy membrane. This membrane offers protection from heavy weights while providing enough flexibility for a cockroach to compress its body and move necessary energy down to its legs.

Scientists conducted studies into how cockroaches reacted to weight by lowering weights of up to 100 grams onto various parts of their bodies. They found that instead of becoming squished, their bodies compress. This is why they’re so hard to kill and why it’s so difficult to squish a cockroach by stepping on it. If you try, the roach will scuttle off to a crack or crevasse before you’ve even lifted your foot.

Cockroaches can also flatten themselves to fit through tight gaps and crevasses. Cockroaches splay their legs out as far as they can go and compress their exoskeletons to half their original size. Cockroaches also move at speeds of about 23 inches per second through combined spaces, making them difficult to catch.

Another report in Nature Communications explains that cockroaches are so tough because of their DNA. They can regenerate limbs while they’re in the nymph stage. Scientists also discovered genes that enabled female cockroaches to lay unfertilized eggs under stress. The eggs then hatch in a virgin reproduction process called parthenogenesis.

Can A Cockroach Live Without A Head?

As mentioned, cockroaches can regenerate their limbs. It’s also widely rumored that they can survive decapitation. This is, in fact, true. A journal in Scientific American explains how cockroaches have an open circulatory system, which means that they do not have as many blood vessels or tiny capillaries as humans. Cockroaches don’t need as much pressure to flow blood through the body.

If a cockroach’s head is removed from its body, blood clotting will seal off the neck to prevent uncontrollable bleeding. Also, roaches don’t breathe through the mouth and nose like most other creatures. They breathe through little holes that are located throughout the body called spiracles. These holes direct air to the tissue through tubes called the tracheae, which the brain has no control over.

Without the brain, essential nervous functions (such as reflexes) still occur thanks to nerve tissue agglomerations that most insects possess. Decapitated cockroaches could still react to touch and move willingly due to these tissue clusters, which control functional movements.

Cockroaches are also cold-blooded. They don’t need much food to survive, so as long as they can hide from predators, they could live for about a month without a head before they finally starved to death.

The brain can survive separately from the body. Scientists discovered this by decapitating a few test roaches and studying the effects. They found that after decapitation, the head could move its antennae back and forth for several hours. Though, without sensory information from the body, it’s not able to last long.

Why Are Cockroaches So Tough?

Most cockroach species have adapted to live in urban environments. They create their habits in moist, unsanitary conditions where they feed off fermenting food. As a result, they are regularly exposed to microbes and pathogens. To survive these conditions, cockroaches have developed extra genes that respond to chemical stimuli (chemoreception).

As reported in Live Science, researchers looking into cockroaches’ genes found that American and German cockroaches have gained widely expanded gene families compared to other insects. These genes are related to taste and smell, as well as detoxification and humidity.

They also allow cockroaches to avoid eating toxic substances, including some deadly insecticides used by humans, and consume plant matter harmful to most other insects.

These enhanced genes allow cockroaches to live in dirty environments and cope with bacteria and infection found in these conditions by secreting antimicrobial peptides, killing bacteria, yeast, viruses, fungi, and cancer cells. Alongside these peptides, cockroaches also possess natural detoxification mechanisms that keep them alive for longer.

Roaches Are Becoming Immune to Pesticides

Alongside their enhanced genes, scientists from Purdue University discovered that German cockroaches, which is the most common household species of cockroaches, are beginning to develop an immunity to pesticides.

During the study, Scharf and his team tested some of the most commonly used insecticides over six months. Three different insecticides were rotated each month for three months and then repeated.

In the second study, a mixture of two insecticides was used solidly for six months. In the third study, the scientists used insecticides that cockroaches had minimal resistance to before starting the process.

However, reproduction was still able to occur across all three studies, making it extremely difficult to wipe out the colonies of cockroaches altogether. The roaches were also able to pass these resistance genes on to their offspring, creating a population of highly immune, indestructible pests that are almost impossible to exterminate.

How Do Cockroaches Survive Radiation?

Cockroaches have earned themselves a reputation for being resilient creatures, even in the face of nuclear war or radiation. Cockroaches have lived for around 300 million years, surviving many natural and man-made disasters.

The theory that cockroaches could survive long-term radiation was tested by the TV series MythBusters. They conducted experiments using roaches, flour beetles, and fruit flies to see which insect was most likely to survive.

While cockroaches were discovered to withstand radiation doses 10 times higher than a human could, flour beetles were better at surviving radiation effects. Over time, prolonged amounts of radiation damage DNA, kill vital cells and lead to fatal diseases like cancer. Therefore, radiation is likely to shorten a cockroach’s lifespan significantly.

Though a cockroach can survive radiation in certain circumstances, they are at the lower end of radiation resistance. Therefore, the survival rate is higher because of the sheer number of cockroaches that exist.

Probability is a leading factor in their survival. With at least 5,000 species of cockroach in existence, at least a few would survive a nuclear disaster. And given that cockroaches reproduce at a fast rate, it wouldn’t be long before their numbers increased once again.

Could Cockroaches Survive A Nuclear Explosion?

Another common myth surrounding cockroaches is that they could survive a nuclear explosion. While this might seem possible and though they have many characteristics that could make survival likely, cockroaches located close to the blast would perish along with all other creatures.

That being said, cockroaches that are far enough from the blast and the surrounding radiation would survive. Cockroaches can live without food for a month and can easily survive on rotten, fermenting foods. For a while, they could feed off rotting bodies and decaying material from deceased humans and animals. But once the food sources run out, cockroaches would be in danger of starvation.

However, a cockroach’s ability to produce eggs means it’s likely the species would continue to survive and adapt to their new environment.

Could Cockroaches Survive In A Microwave?

Because most cockroaches can survive nuclear radiation for a while, it’s likely that they could survive in a microwave too, which is far less deadly.

Microwaves work by emitting radiation from a magnetron, which is located on one side of the oven. The interior section is lined with metal and reflects radiation to the center. As this is happening, vibration and heat are generated by water molecules that have been agitated by the microwaves.

While microwaves use heat to warm food placed inside, approximately four or five parts inside the interior compartment remain relatively untouched. A cockroach will use its extra genes to locate the cold spots and hide there until the waves subside.

Also, cockroaches have few water molecules inside the body. Where a microwave heats liquid through the vibration process, a cockroach could reside in a microwave and come out relatively unscathed as there is not enough water in the body to kill it.

Why Are Cockroaches So Difficult To Control?

Cockroaches are highly adaptable. Having survived for millions of years, they have evolved a range of survival tactics that ensure the species’ survival. Their genetic makeup and resilient nature make them difficult to control and eliminate, meaning they’re a significant problem in many households.

Cockroaches are one of the smaller household pests. This gives them an advantage in the sense that they can hide away to avoid detection. They’re also difficult to spot with the naked eye, especially if there are only a small number of roaches present in the home.

This gives them advanced survival capabilities. As long as cockroaches can stay hidden in daylight and don’t stray too far into human territory, they have a permanent home with abundant food, water, and secure hiding spots.

A cockroach can move at speeds of more than 3 miles per hour. Given their size, this is extremely fast. So much so that they are considered one of the fastest insects on the planet. Scientists tested the start speed of cockroaches and found that they darted off at 8.2 milliseconds. In comparison, a human’s start speed is above 110 milliseconds.

The secret to a cockroach’s advanced speed is in its legs. Cockroaches have 6 legs and 18 knees in total. They maximize every movement and rise on their hind legs, giving them momentum as they run.

Their legs also have tiny hairs on them, which detects even the slightest amount of movement. Upon detecting something in the room, they will scuttle off and hide, only emerging once it is safe to do so.

Cockroaches are omnivores, so they survive on a diet of sugars, proteins, and fats. They will scavenge any organic food source, including wood, hair, and other decaying matter. Similarly, household cockroaches will feed off anything they find on the floors and in cupboards to survive.

They are adaptable with their eating habits and will even eat other dead cockroaches for sustenance. Without water, cockroaches can live for up to a week. Without food, they can survive for around a month.

A home also offers many cracks and gaps for a cockroach to store her eggs, which only encourages the breeding process. In only a short matter of months, your home could become infected with multiple colonies that will need many different extermination treatments.

Cockroaches are hard to kill because they’ve been with us for centuries and have evolved as a species. They breed rapidly, their bodies have adapted, and their brains are hardwired to avoid perilous situations.