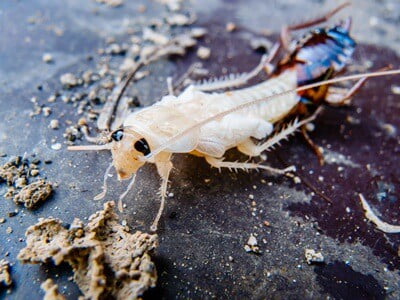 When people see a cockroach, their first thought is to crush it. If so, you might expect to see red blood oozing from it. In actuality, you’ll see a distinct whitish, yellowish, or clear-colored fluid emerge around the dead cockroach. That’s because cockroaches do have blood, but not the crimson kind that you expect from most creatures.

Cockroaches have blood that’s colorless, whitish, creamy, orange, or yellowish. This depends on the sex and development stage of the cockroach. The blood is never red because cockroaches lack hemoglobin. Instead, they have hemolymph, which gives their blood a distinct color.

What Kind Of Blood Do Cockroaches Have?

Like nearly all insects, cockroaches have a distinct type of blood known as hemolymph, a colorless or whitish fluid that flows throughout the body.

Cockroaches have an open circulatory system that consists of a network of spaces called hemocoel. The hemocoel works like blood veins, capillaries, and vessels present in vertebrates, and it is responsible for pumping blood to the cockroach’s vital organs.

Cockroach blood is not red since it does not contain hemoglobin, a type of red protein responsible for oxygen transmission in the blood of vertebrates.

Instead, cockroaches use their tracheal system to transport oxygen throughout their bodies. Their blood remains whitish or colorless, and it consists of colorless plasma.

What Is Hemolymph In Cockroaches?

Hemolymph in cockroaches is the equivalent of red blood in humans and animals. It is a colorless, extracellular fluid that flows through the body of:

It acts as the blood in insects. As such, it’s responsible for transporting nutrients, hormones, waste, and nucleating agents between its cells.

According to Comprehensive Molecular Insect Science, hemolymph can make up between 15% and 75% of a cockroach’s body volume.

The fluid consists of 20-50% water, with the remaining being a solution of salts and organic compounds. These findings explain why a cockroach’s blood usually appears colorless or whitish.

Cockroach blood does not carry oxygen. Instead, this is absorbed through the spiracles. Baby cockroaches have more hemolymph to body volume than adults.

What Are Corpuscles In Cockroaches?

Corpuscles are small, free-floating cells that make up the hemolymph of cockroaches. They are simply blood cells, which are the equivalent of red and white blood cells found in humans.

Cockroach blood, or hemolymph, contains various types of corpuscles. These include:

These blood cells play a vital role in boosting humoral and cellular immunity in cockroaches and other arthropods. That’s according to Biomedical Sciences.

Hemocytes are the most abundant and most dominant cells in cockroach blood. Aside from boosting immunity, hemocytes are responsible for the generation of new cells and repairing broken tissue. They also transport growth hormones and synthesize proteins and carbohydrates.

What Color Blood Do Cockroaches Have?

Cockroach blood is almost always colorless. You might stumble upon roaches with other blood colors, however, ranging from whitish to orange.

Lack of hemoglobin is the main reason that hemolymph is not red. However, that’s not all. The sex of the cockroach also has a role in determining the color of its blood.

Both male and female cockroaches have clear, colorless blood. The color may change to yellowish or orange in egg-laying females, however. That’s because adult females experience hormonal changes when they start to produce eggs.

This triggers the cockroach’s liver to generate a protein called vitellogenin. This is yellowish to orange in color. When a cockroach’s blood bonds with vitellogenin, it turns orange or yellow. The blood will remain orange until it completes the egg-laying process.

Cockroach blood doesn’t look any different from that of other insects that have hemolymph. It is clear, whitish, or yellowish, depending on the type and sex of the cockroach. The reason cockroach blood is not red has to do with lack of hemoglobin. This is an iron-rich respiratory protein that gives our blood its red color.

Likewise, it does not flow like human or animal blood. You should not expect hemolymph to ooze out like vertebrae blood. It consists of water, ions, carbohydrates, amino acids, and fats. That’s why it is somewhat thick and creamy, like pus, with significantly low viscosity.

Do Cockroaches Have Red Blood?

Cockroaches do not have red blood. When you squash a roach, it may spit out blood that’s clear, whitish, yellowish, or even orange.

Cockroach blood is usually colorless, though, since it does not contain the iron-rich, respiratory pigment hemoglobin. To understand why cockroaches and insects do not have red blood, we need to grasp the role of hemoglobin in determining blood color.

According to the American Chemical Society, different organisms have varying blood colors because of their molecular composition.

For instance, red blood results from hemoglobin, which is responsible for transporting oxygen in vertebrates. It contains iron and red-colored compounds. The iron in hemoglobin is initially dull red, but it changes to bright red as soon as it binds with oxygen.

The blood color of cockroaches remains clear or colorless since it does not contain respiratory pigment hemoglobin. In any case, cockroaches have an open circulatory system, and they do not need hemoglobin to transport oxygen. Instead, cockroaches respire using tracheal tubes.

Why Do Cockroaches Have White Blood?

Cockroach blood might appear whitish because of the molecular composition of the blood. The blood contains salts, ions, organic compounds, proteins, and other minerals. All these can change the color of bodily fluids from clear to white.

This is mainly due to a lack of hemoglobin in their system. Cockroaches don’t need hemoglobin since they transport oxygen and other gases differently. Instead of using hemoglobin to carry oxygen, they breathe using tracheal tubes. Besides, they do not have red and white blood cells like humans and other animals.

The only time hemolymph changes color is when adult females begin to produce eggs. Egg-laying females have higher concentrations of proteins and vitamins. These change the color of their blood from white (colorless) to yellow or orange.

What Does The Blood Of Cockroaches Contain?

According to Science Direct, cockroach blood (hemolymph) is a complex solution of water, inorganic salts, ions, and organic compounds.

It consists of high concentrations of proteins, amino acids, lipids, carbohydrates, and glycerol. Cockroach blood is 20-50% water, depending on body size, with the rest of the fluid made up of other organic and inorganic compounds.

Unlike in humans and vertebrates, cockroach blood does not transport oxygen to vital body organs. After all, it does not contain hemoglobin, which is responsible for carrying gases in our bodies. In contrast, the roles of hemolymph in cockroaches include:

Hemolymph contains blood cells known as hemocytes that play a vital role in the bug’s immunity. Hemocytes also repair damaged tissues, trigger the production of new cells, and protect the roach from pathogens.

Do All Roaches Have Blood?

All cockroaches have blood (hemolymph). In all cockroach species, this helps in transporting materials, delivering vital nutrients, and flushing out toxins. Cockroaches will not survive without hemolymph since the tissues and cells won’t perform their intended functions.

Nevertheless, the blood in cockroaches is not red, as is the case with humans and vertebrate animals. Hemolymph is mainly colorless, but it can be yellow or orange depending on the development stage of the cockroach.

Some cockroaches might have a white-colored appearance and seem lifeless. However, this does not mean they do not have blood. White cockroaches result from molting, and it might take several hours to a few days to grow a new skin with its traditional dark, brown tan.

Do Baby Roaches Have Blood?

Baby cockroaches have blood, just like adult cockroaches. Cockroach nymphs have relatively more hemolymph to body volume than adult roaches. They need it to help their growth and development.

As mentioned, hemolymph performs various functions, including acting as a storage pool for water and other vital minerals. Baby roaches require as much water as possible to survive their first days of life. Body tissues can also access water from hemolymph to replace the moisture lost during desiccation.

Hemolymph contains hemocytes that are responsible for boosting immunity during a nymph’s formative days. The hemocytes protect the baby roach from pathogenic organisms. They also help stimulate the growth of new cells.

Cockroaches don’t bleed. They have blood, but they don’t bleed out when decapitated or smashed. This phenomenon is because cockroaches have an open circulatory system rather than a closed network of veins and arteries.

Besides, they do not pump blood in veins and capillaries. Instead, their blood floats around to vital organs and tissues.

The lack of pressure during hemolymph circulation means blood won’t ooze out when the cockroach is hurt. In addition, cockroach blood contains hemocytes that ensure clotting after decapitation. This explains why you will not see a cockroach bleeding and why it won’t die of blood loss, even when it loses its head.