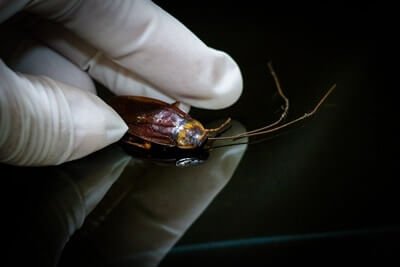 Cockroaches are hard to kill. They can bounce back from insecticides, recover from being stepped on, and regrow lost limbs. Although roaches can’t survive a direct nuclear blast, they can withstand radiation for longer than humans. So, you can be forgiven for thinking that the only way to instantly kill a cockroach is to chop off its head.

A cockroach can live without its head for up to 3 weeks. Its anatomical makeup allows it to breathe, endure starvation, and resist dehydration. Once headless, roaches can’t eat, but they can use fat storage from elsewhere to stay alive. They can survive dehydration by slowing down their respiration to prevent water loss.

Table of Contents show
1 How Does a Cockroach with No Head Breathe?
1.1 Don’t Require Nerve Cells To Breathe
1.2 Blood Doesn’t Carry Oxygen
2 How Long Can a Cockroach Live Without Its Head Before It Starves to Death?
2.1 Water Deprivation
2.2 Food Deprivation
2.2.1 Glycogen
2.2.2 Trophocytes
2.2.3 Endosymbionts
2.3 Do Headless Female Roaches Survive Longer Than Males?
2.4 Cold Bloodedness
3 Will a Headless Cockroach Bleed to Death?
3.1 Related Articles:

How Does a Cockroach with No Head Breathe?

Cockroaches can survive without a head partly because they don’t require their head to breathe. They take in oxygen through pockets across their abdomen. These stretch into their bodies as ‘tubes,’ which are called spiracles.

A cockroach’s respiratory system is different from mammals. The spiracles are the primary valve where oxygen and carbon dioxide are exchanged. They’re located on the body rather than the head. Oxygen enters the body through these passages, with carbon dioxide being expelled.

Two other physiological differences allow cockroaches to breathe with no head:

Cockroaches don’t use nerve cells to direct their body to breathe. As such, they can breathe without signals from their brain, which is known as “passive breathing.”

Cockroach blood doesn’t carry oxygen throughout the body. Instead, they count on their spiracles to intake air. If their body needs to close down its blood flow and isolate it to certain areas, it doesn’t experience oxygen deprivation.

How Long Can a Cockroach Live Without Its Head Before It Starves to Death?

As mentioned, cockroaches can survive for up to 3 weeks without a head.

Since cockroaches are unable to detect or avoid predators while headless, this can lead to death. Once the body is killed, that’s when the cockroach is dead.

According to the Entomology Department at the University of Illinois, numerous studies have been conducted on decapitated cockroaches. They focused on:

No current studies have a clear answer regarding how long a decapitated cockroach can survive. However, we can estimate how fast its death-clock ticks based on how it can endure starvation and dehydration.

Cockroaches need water to survive. Dehydration will usually kill a cockroach when its head is chopped off. However, it can still take days or weeks to finish them off.

Headless cockroaches lose water mostly by breathing through their spiracles. After all, there’s less food to excrete or act as a supply for their outer shell.

According to the Journal of Experimental Biology, cockroaches slow down their breathing rate to preserve water. This prolongs their survival when they’re headless or cut off from water sources alike.

This study didn’t decapitate their cockroach subjects. However, we do know that cockroaches rely on their spiracles to breathe. By understanding how long they take to die of thirst, we can work out how long they can live without a head.

The more hydrated they are before they’re decapitated, the longer they’ll survive. Limiting the access a cockroach has to water before decapitating it will kill it faster. It won’t have the same reserves to fall back on.

Dehydration will kill off the cockroach long before decapitation does.

Cockroaches can survive for over a month without food.

Headless cockroaches are unable to eat. Without the use of antennae and eyes to guide them, the body will wander aimlessly. Even if it locates food, it’ll be unable to eat it without a head.

If subjected to starvation alone, most headless cockroaches would survive for no more than 3 weeks. Arthropod Structure & Development discovered some of the physiological mechanisms behind this fact.

When cockroaches are barred from food:

Glycogen serves as the primary storage of energy in many invertebrates.

Lipids, or fats, are also good sources of energy. In cockroaches, both glycogen and lipids are stored in “fat bodies.” Larger fat bodies are concentrated near their intestines, gut tubes, and reproductive organs.

Trophocytes are the cells that make up cockroach fat bodies. Those, as well as fat lobes, will shrink during food deprivation. This enables cockroaches to preserve fat when they’re starving.

Endosymbionts are bacteria that coexist peacefully within the cockroach. These are known to synthesize amino acids.

Amino acids act as additional energy sources to cockroaches, particularly when glycogen and lipid storages are low. This allows cockroaches to endure long bouts of starvation.

Starved cockroaches were able to mobilize the nutrients in their fat bodies for about 2 weeks. Most died at the 3-week mark. There were no surviving cockroaches past 7 weeks.

The Journal of Invertebrate Physiology found that starved female cockroaches lived longer than starved males. This is possibly due to the larger amount of fat stores.

Cockroaches with more fat storage have more energy to use during periods without food. Biologically, this makes sense, as female cockroaches are responsible for producing eggs.

Cockroaches can survive for long periods while headless and starving because they’re poikilotherms.

This means that they cannot regulate their internal body temperatures. They’re reliant on the temperatures of their environment. Poikilotherms are commonly described as cold-blooded. The main difference between warm-blooded and cold-blooded organisms is their metabolic requirements.

Maintaining a warmer blood temperature requires energy. Energy is acquired through the food a creature eats and then converts into usable chemicals during metabolism.

However, much of the heat energy attained from food is lost to the environment. That’s why warm-blooded animals, such as humans, need to eat food each day.

This allows the cockroach to survive for long periods of time without eating. Therefore, being headless won’t impact their survival capabilities significantly. They’re built in such a way that allows them to be less dependent on food.

Will a Headless Cockroach Bleed to Death?

A cockroach won’t bleed to death due to its vascular system, which carries blood throughout the body. It’s different from mammals and prevents headless cockroaches from bleeding to death.

Cockroaches don’t have a complex vascular system. A smaller number of blood vessels mean a smaller number of exits points that blood can leave when opened. If decapitated, blood will leave slowly and cannot empty in a sudden gush.

Therefore, a headless cockroach won’t bleed to death. Their blood pressure doesn’t drop to critical levels, and their blood loss is not uncontrollable. Their necks will clot up and seal before this happens.