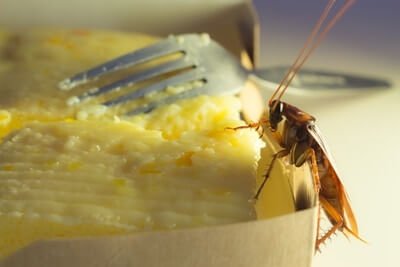 Cockroaches have been around for over 300 million years. They’ve adapted to global changes, survived natural catastrophes, and quickly adjusted to the human invasion of their natural habitats. While countless other species died off, cockroaches endured, deriving energy and nutrients from some surprising sources.

To survive, cockroaches can derive calories and trace nutrients from almost anything. Cockroaches will eat items that aren’t even technically food. Examples include paint, cigarette butts, glue, hair, paper, and the corpses of other cockroaches. However, they prefer to eat fruits, meats, and vegetables.

Cockroaches can survive for 4 weeks without food. If deprived of water, they can survive for 1 week. However, this is rarely what kills cockroaches. There’s almost always a source of food or water within the home.

What Do Cockroaches Feed On?

Most organisms have a limited range of food they can safely eat or digest. Cockroaches have no such problems. Their robust digestive system means that they can eat almost anything without getting food poisoning.

Since they can eat rotting or decomposing matter, cockroaches can quickly adapt to almost any food source they discover. They can glean trace nutrients and calories from unlikely sources.

In a typical indoor environment, cockroaches will eat:

When hungry and deprived of the above options, they’ll survive off of things we don’t consider food. These include:

Why Can Roaches Eat Anything?

Cockroaches survive on unlikely food items because they can derive nutrients from the base ingredients. For example:

Cockroaches can eat these items because they have gut bacteria capable of digesting cellulose. The bacteria is a living organism on its own and uses the cockroach as a host.

In return, it enables the cockroach to digest any material it eats, even if it’s mildly toxic or difficult to break down on a molecular level.

Cockroaches are omnivorous scavengers. They don’t hunt and kill their food. Instead, they feast on any food that’s left over by predators or when things die naturally.

Scavengers are opportunistic creatures that are capable of eating and digesting a wide variety of foods. That includes things that would normally make other animals ill.

Cockroaches are attracted to foods that have a strong smell. For example, fruits become more pungent as they mature.

They respond to odors over short distances far better than long distances. This makes sense as their instincts will drive them to the nearest available food source. It means that they won’t have to expend as much energy scavenging.

Their sense of smell will draw them toward whatever they can find nearby.

What Foods Do Roaches Prefer?

According to Chulalongkorn University, cockroaches favor bananas over other kinds of foods.

Researchers conducted an experiment using German cockroaches. They were divided into two groups:

The researchers let them choose between:

In order of preference, it was discovered that male cockroaches preferred:

Researchers theorized that female cockroaches preferred protein-based foods because they needed more protein to gain the energy needed for ootheca creation and incubation.

Both male and female cockroaches preferred bananas and potatoes due to their carbohydrate content. Carbs are a good source of energy and a chemical compound that aids in energy conservation and fat storage.

It’s safe to say that other carb-rich foods that weren’t used in the study are preferred by cockroaches.

What Foods Do Roaches Prefer While Starving?

The texture is another important factor that cockroaches take into account. The researchers noticed that cockroaches were drawn to mushy foods that were easy to eat. The cat food they chose for the experiment was firm.

It was theorized that, under stressful conditions such as starvation, cockroaches are attracted to foods that they can chew easily. This plays into the fact that cockroaches eat decaying and fermenting matter in the wild.

Since they consume carcasses and rotting plants, it’s natural for cockroaches to want soft food. Although their mandibles are capable of eating thicker foods, the softer the food is, the easier the meal becomes.

Cockroaches have a peripheral gustatory system that sends signals to their brain.

When cockroaches eat sugar, their peripheral gustatory system stimulates their “sweet” receptors. They like sugar because it’s sweet.

Cockroaches have no problem regularly consuming glucose. However, studies have shown that they’re now adapting to avoid it. Cockroaches have become averse to the glucose used in cockroach traps.

That isn’t to say that cockroaches now refuse to eat sugar. It does mean that the effectiveness of certain cockroach traps has been reduced.

The study proved that a bitter compound receptor is now stimulated alongside the sweet receptors.

When people say that cockroaches eat everything, it’s not an exaggeration. Cockroaches are omnivores, meaning that they eat plant and animal matter.

Rotting tree bark and plants is their ideal choice. However, if they find a dead animal and nothing is competing for this food, they’ll eat the flesh.

What attracts cockroaches to animal matter is the keratin found within it.

Keratin is a fibrous protein that our hair and nails are made of. The outer layer of our skin is also made of keratin, so cockroaches can bite humans. They may crawl on you while you’re sleeping and try to nibble at your skin.

However, they rarely get close to humans. They prefer to scavenge in our kitchens rather than our bedrooms. Only starvation or severe overcrowding would drive them to bite humans.

How Do Cockroaches Eat Their Food?

Instead of hunting for and killing their food, cockroaches roam around until they are able to find something to eat.

They rely on their sense of smell to uncover such food and prefer to eat whatever is nearby. When scavenging, they move their antennae from side to side in order to smell the food in the air.

While it may be difficult to see, cockroaches do have mouths. This is made up of:

The labrum is a flap at the front part of the mouth and pulls the food toward their mouths. Since it works as a set of lips, the labium closes the chewing cavity to prevent food from falling out.

Once the food is in, cockroaches use their mandibles to chew the food. Numerous creatures have mandibles that move up and down, but those of a cockroach move side to side.

Cockroaches do use their mandibles to tear chunks of food into smaller chunks. However, it’s the maxillae that further break down the food to fully be ingested by the cockroach.

The maxillae are basically the teeth of the cockroach, though they don’t look like regular teeth. They’re pincers located below the mandible that grind the food up into tiny, digestible pieces.

Cockroaches have teeth in their stomach, called the gizzard, which is an organ composed of 6 plates. Because of these multiple sets of teeth, cockroaches can chew up and digest tough objects like tree bark.

How Often Do Cockroaches Need to Eat?

Cockroaches spend most of their time scavenging for food and eating. They’re most active between 5 PM to 6 AM. Their peak hours are between 7 PM and 10 PM. and again between 4 AM and 5 AM.

They hide away in their nests for the rest of the day until it’s scavenging time again. The energy they get from eating is quickly expended in the form of physiological functions, such as:

According to the Journal of Insect Physiology, if young cockroaches go through a period of starvation before a molt, they’ll delay their molting cycle until food becomes available once more.

The same thing happens with female cockroaches, who delay their reproduction cycle if they are starving.

How Long Can a Cockroach Live Without Food?

With the amount of time cockroaches spend eating, you’d think they would die the moment they no longer had food. Surprisingly, cockroaches can survive for an entire month without food.

Cockroaches can only live for a week when deprived of water. They may survive for up to 3 weeks if they can gain hydration from other sources, such as humidity in the air.

Cockroaches are able to survive this long because they are cold-blooded insects. They cannot control their own body temperature and are affected by the temperature of their surroundings.