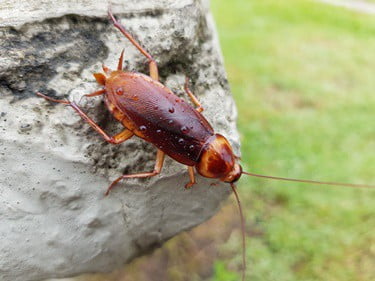 Antennae may not look impressive, but they play a pivotal role in cockroaches’ day-to-day activities and survival. The antennae are used as a way to sense the world around them.

Roaches use their antennae to locate food and estimate the distance and height of any obstacles in front of them. They can also detect pheromones, enabling them to find mates. The antennae can sense vibrations, collect and interpret odors, detect air moisture, and sense barometric pressure changes.

If a cockroach loses its antennae, it will be more vulnerable to predation. Cockroaches adapt to injuries and adjust how they move their antennae until the body parts have regrown. If blinded, a cockroach may rely on navigating through its antennae.

What Do Cockroaches Use Their Antennae For?

Cockroaches don’t have good vision. Instead, they rely on their antennae to feed them information about:

This allows cockroaches to navigate their surroundings, interpret threats, and find each other. While cockroaches seem like mindless creatures, their antennae transform these insects into very perceptive creatures.

The main responsibility of the cockroach is to feed itself, which is why all of its evolutionary functions support this task. The antennae contain special cells known as the olfactory receptors. These can bind to the free-floating molecules in the air or on surfaces.

By twitching its antennae back and forth, a cockroach can collect food particles. These, of course, are not enough to feed a cockroach, but they can tell it where to find food. They will then follow this trail to leftovers, rotting carcasses, or other edible things.

A cockroach can tell it is close to food because the smell will grow stronger. That’s because olfactory receptors transmit signals to the brain through the axons and to the antennal lobe. This is located in the cockroach’s front brain; it’s only technically a brain.

A cockroach uses its antennae to tell when a mate is ready to breed, which is done through pheromones. A male or female will excrete an odor through their poop. This smell is nearly undetectable to humans but signals to other cockroaches that it’s time to breed.

If a cockroach is far away, the antennae will guide it back to a nest or a sepcific mate. For males, they’ll release a pheromone that is even capable of enticing a female to breed. The female’s antennae will detect this smell and interpret it so she understands how to react. It will even encourage the cockroach’s body to produce different hormones so that it can reproduce.

The antennae also help cockroaches distinguish males from females. Laboratory experiments have shown that, without antennae, cockroaches struggle or fail to breed.

Roaches aren’t blind, but they can’t see clearly at a distance. At close range, they have night vision and an almost 360-degree view. However, if they relied on sight alone, they may fail to see obstacles in their path until it’s too late. To compensate, antennae work as a second set of more eyes that enable them to navigate the world.

A cockroach’s antennae can detect changes in air pressure and vibration. This gives them the ability to:

For close-range items, cockroaches also gather more detailed information with the use of their antennae. Cockroaches twitch their antennae back and forth and touch the ground with them. This lets them:

Even more impressively, the antennae can be used to gauge the position of the sun. Despite being nocturnal creatures, cockroaches can emerge during the day. Their antennae are used to tell direction when migrating from one region to another.

Cockroaches are prey animals with little to no offensive capabilities. As such, the best way to avoid predators is to sense when they’re coming and flee.

Cockroaches use their antennae as an early warning system. They can not only smell the unique scent of the predator but use the change in air pressure to tell which direction it’s coming from. That’s paired with detecting vibrations.

Cockroaches can hear and feel when a predator is getting closer. They can even tell what speed it’s approaching. Because of this, many predators of the cockroach depend on either outrunning or stalking them. Even a small step can tell the cockroach that it’s time to flee.

With their antennae, cockroaches can sense changes in the weather. This is accomplished with thermoreceptors, which are special cells designed to sense the temperature of the air. It even helps the antennae detect how much water vapor is present in the surroundings.

To take it a step further, cockroaches are also capable of predicting the weather. They have a set of proprioceptors in the antennal joints. These can detect changes in barometric pressure, warning them that a storm is incoming. Heavy rain, wind, and other natural dangers are a significant threat to insects. Without an early warning, cockroaches may drown, be swept away, or be harmed by falling debris during the storm.

As such, cockroaches use their antennae to understand when they must flee to higher ground or find shelter. In fact, according to the County of Santa Barbara, cockroaches have been known to detect storms up to 4 hours in advance. Before heavy rain, cockroaches can be seen fleeing en mass across roads and through urban areas to find a safe haven.

Why Do Cockroaches Have Antennas?

Cockroaches use their antennae to navigate and survive in the world. They need it to:

Losing even one antenna can compromise a cockroach. It will be:

In laboratory settings, cockroaches with their antennae removed were observed to have a dramatic behavioral change. They became more physically aggressive and rammed themselves into surfaces and items.

Since cockroaches have an impressive regeneration ability, antennae will grow back. Depending on its age, a cockroach can regrow up to 30% of its lost antennae during the next molt. It may take several molts to regenerate the lost appendage completely. Once it does, however, it will regain complete use of the antennae and return to normal.

In the meantime, a cockroach can survive for several weeks by modifying its routine. It will remain close to walls to avoid obstacles and won’t venture far from its nest or food source.

According to Zoological Science, cockroaches can even adapt to damaged antennae. This study also proved that if a cockroach is blinded, it can still navigate well with its antennae.

Researchers placed a small metal plate onto one antenna, so the cockroach was slightly weighed down. This enables the researchers to track:

With the weight, moving antennae on purpose became more difficult. The researchers also removed the mechanosensory organ, called the scapular hair plate. When this happened, the initial resting position of the antenna was changed by about 20 degrees outwards.

What Type of Antennae Do Cockroaches Have?

Cockroaches have filiform antennae. This term describes a structure that is:

There are over a dozen types of antennae in the insect kingdom, each with its own advantages and disadvantages. For cockroaches, filiform is one of the most primitive kinds. It’s like a thread that’s comprised of individual segments that can be broken down into three pieces:

Each segment is bonded to the next with flexible joints. This allows it to bend and move without breaking. At the base of the antennae, cockroaches use muscles to twitch, bob, and lift the antennae.

When it comes to receptors, they’re classified as proprioceptors and exteroceptors or internal and external mechanoreceptors. Cockroach antennae have many different mechanoreceptors, each in a unique location with its own purpose. The main ones include:

The flagellum is the longest part, which is fully covered in sensillae. The sensillae are small hairs that work to sense:

Each sensillum is bonded to the nervous system. They direct signals to specific areas within the brain. For example:

The pedicel and the scape work to draw in more sensory information. All of that is transmitted to the brain, where cockroaches can interpret outside movement, their own position, and the state of their antennae.

When close to something, their flagellum can sense the temperature and the chemical consistency. Meanwhile, the pedicel determines the direction and the solidity.

That’s due to the campaniform sensilla and the hair spread all across the outside of a cockroach’s antennae. In particular, the chordotonal is located directly within the pedicel.

Why Do Cockroaches Move Their Antennae?

When a cockroach swings its antennae up and down, it’s sensing the area around it. Cockroaches may appear to do this constantly, which enables them to:

To move them, cockroaches use five different muscles set in and around the antennae. They each have a specific function, spread out across the cockroach’s head and the scape of the antennae. These include the:

All in all, these 5 muscles are controlled by 2-3 neurons, called excitatory motor neurons. These transit information to and from the brain stem. If it seems like a great deal of work to move these antennae, that’s because it is. Cockroaches benefit from a complex setup of muscles, joints, nerves, neurons, and more, which help them navigate the world.

Why Do Cockroaches Pull on Their Antennae?

If you spot a roach gently tugging on its antennae, this is a cleaning routine. These appendages are necessary to sense odors and inspect objects. If they get coated in mud, food residue, poop, or other substances, then they’re less effective.

Because of that, while roaches are seen as gross or dirty, they’re actually very proficient groomers. A roach might clean its antennae several times a day. This involves pulling it into its mouth or using its legs to tug on the strands. It even resembles spinning yarn.

All in all, roaches use their antennae for everything. While they can survive without them, antennae are useful for cockroaches by helping them see, move, feed, and mate.