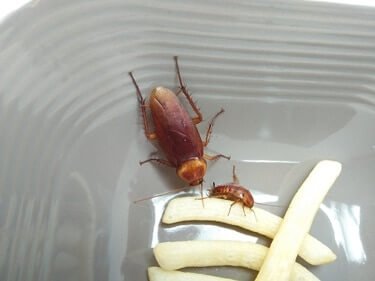 Cockroaches are widely seen as dirty insects that spread bacteria and disease. They come into contact with garbage, rotting food, and feces all the time. So, it seems unlikely that cockroaches would have a cleaning regime.

Cockroaches groom themselves by running their antennae and legs through their mouths. This removes foreign materials (dirt, grime, sticky substances, and rotting fecal matter and food) from the surface of their bodies. This rigorous washing routine keeps their bodies clean, increasing their olfactory acuity.

The only issue is that cockroaches can’t remove bacteria or pesticides from their bodies. Unfortunately, cockroaches remain a significant threat to your health, regardless of how clean they try to keep themselves.

What makes household cockroaches so filthy are the disease-causing bacteria that they walk through in the sewage system and around your home.

Cockroaches could be coated in the following substances:

This will cover them in germs, bacteria, and mold spores. Also, if they survive exposure to insecticides, they’ll spread them to other surfaces. If any of these get on to your food, they can cause many health problems.

Because of that, if you find cockroaches in the home, they’re likely to be dirty. Wherever they walk, they’ll spread contaminants.

However, cockroaches will clean their feet, legs, and antennae with their mouths. Unless they keep their bodies clean and free from debris, olfactory reception will be compromised.

Are Cockroaches Cleaner Than Humans?

Household cockroaches have a greater exposure to pesticides, bacteria, and rotting matter than humans.

This will coat their outer bodies and infect their saliva and poop. The average person doesn’t go rooting around in garbage or spend time in sewers/drains, so we don’t carry the same disease-causing bacteria.

While cockroaches aren’t venomous, like snakes and certain lizards, a bite from a cockroach can be dangerous to humans. Their mandibles are used to pull away at the rotting matter and chew up decaying food.

This coats the cockroach in bacteria, and when it bites you, the bacteria will transfer to your skin or bloodstream. This can lead to infections and rashes, if not more serious biological reactions.

However, if we zoom out from microbiology and look at how much tangible filth is on a cockroach, you may think that they’re cleaner than humans. Cockroaches wash and groom themselves incessantly.

They’ll lick their antennae and scrape away filth from their legs and wings. A human may only shower once a day (or less), but cockroaches groom themselves countless times daily. In this sense, cockroaches have a more strict cleaning routine than people, but there are certain caveats.

Cockroaches can’t wash off all their bacteria, and their hard exterior shells (exoskeletons) are an allergen for people.

How Do Cockroaches Clean Themselves?

Cockroaches perform a cleaning routine multiple times a day. According to the Journal of Comparative Neurology, this habit is controlled by the insect’s neurons. They fire signals to the legs and mouth, so they all work together.

Cockroaches clean rapidly, tugging their legs and antennae in quick, jerky movements. During this short grooming session, a cockroach will:

It resembles the way that flies and other insects groom themselves.

Cockroaches don’t splash in water like birds, nor do they roll around in the dirt like some mammals. Instead, they rely on the saliva in their mouths to clean away any dirt and debris that’s gathered on their bodies.

A layer of anything on the antennae will hamper a cockroach’s ability to navigate. They move their antennae around food, garbage, and feces to learn different things about them. This may include smell, size, and nutritional content.

This same routine is performed on their legs, so the small hooks that give cockroaches their dexterity aren’t impeded.

When Do Cockroaches Need To Groom Themselves?

Some cockroaches will pause in the middle of a meal to clean their legs and antennae. According to The Scientific World Journal, cockroaches clean themselves in response to small particles, irritants, and parasites.

It’ll start again if a cockroach becomes coated in filth right after cleaning. This may happen after it’s walked through spilled juice in your kitchen or explored a pet’s litter box.

How Often Do Cockroaches Clean Themselves?

Cockroaches clean themselves constantly with a series of short grooming sessions. They primarily groom themselves during peak hours, when they’re most actively exploring.

This isn’t just when they forage, explore, and eat, thereby exposing themselves to bacteria-ridden surfaces. It’s also when they have the most energy, so they can take pit stops to groom themselves and keep their senses sharp.

The peak hours for cockroaches are during the night, at around 2-4 hours after sunset. If your home has a late bedtime, cockroaches may wait until the household becomes quiet before foraging and grooming.

If you observe a cockroach sitting in one place without moving, it’s likely cleaning itself.

Do Cockroaches Really Clean Themselves After Touching Humans?

Cockroaches clean themselves after touching a human, but it’s not because they find people filthy.

You won’t see a cockroach frantically trying to clean off a human smell or avoiding us because of some dreaded human bacteria. Instead, they’ll clean themselves after contact with any predator.

Cockroaches know they need to limit their contact with fungus, bacteria, and mold. Considering what they eat and where they travel, this would quickly build up on their legs and antennae.

To avoid being overwhelmed, to the point of even placing their own lives in danger, cockroaches often clean themselves. It’s a natural habit and response to being in contact with another living creature.

Are Roaches Grossed Out By Humans?

You may believe that part of why cockroaches flee from people is bacteria. Some people even claim that cockroaches can tell when you’re clean or dirty and will avoid or target you as a response.

In reality, cockroaches flee from humans because we’re:

That last point explains why roaches might avoid some people.

They may dislike a certain:

Cockroaches dislike the powerful scents and will avoid them.

Cockroaches clean themselves regularly, even though they’re dirty, bacteria-riddled insects. They prioritize removing anything that reduces their olfactory sense and ability to function optimally.