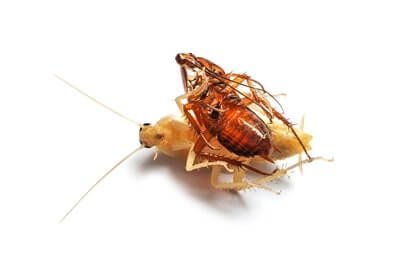 Cockroaches shed their skin many times during their lifecycle to accommodate the growth of their bodies. You’ll usually find cockroach exoskeletons in their nests, but you may also discover them behind electrical appliances, underneath household furniture, in cupboards and drawers, and hidden away in the corner of rooms.

Roaches are protected by a tough exterior shell called the exoskeleton (exuviae). Roaches cannot grow past the limits of their hard exoskeleton, so they must molt this rigid skin in order to grow larger. Depending on the species, cockroaches will molt 11-13 times to grow from nymphs to adults.

Once they finish molting, cockroaches shed their old skin and leave it behind. If you see a white cockroach, this is simply a cockroach without a hardened exoskeleton. A single roach shell can tell you where a nest is located or how many cockroaches are there. It can also indicate how soon you can expect a new wave of cockroaches to be born.

Why Do Cockroaches Shed Their Skin?

Invertebrates don’t have a skeletal system on the inside of their bodies. Instead, their skeletal system is on the outside in the form of an exoskeleton (outer skin or shell). This shell has these functions:

The exoskeleton is what holds cockroaches together, serving as a framework that keeps the body in place. It allows the cockroach to move its muscles and control each segmented part properly. Without the exoskeleton, a cockroach’s mushy body would fall apart. It’s no different from how a human would fall apart without a rigid interior skeleton.

Exoskeletons are tough enough to protect cockroaches from harm. This includes getting stepped on or smashed with a book. However, because the outer shell is so rigid, cockroaches have to shed their skins to grow.

When a cockroach is born, its skin is soft and white. The exoskeleton will then harden and turn brown after a few hours. To achieve maturity and grow into a full-sized adult, cockroaches must go through a molting cycle. They will:

Not all insects mature this way. Cockroaches do because they have an incomplete metamorphosis.

It’s like a worm enveloping itself in a cocoon and coming out as a butterfly. In the case of insects with complete metamorphosis, the juvenile insect looks nothing like its adult form.

Cockroaches, on the other hand, have a molting cycle because of their incomplete metamorphosis. The juvenile cockroach (nymph) hatches and looks nearly identical to an adult roach except for their:

They eat and behave in the same way their parents and have the same daily activities. Their growth process is gradual and is only complete after a series of molts.

Like any living organism, the developmental stage is the most important part of a cockroach’s life. It’s what determines how big a cockroach will grow, as well as its survival chances. Factors that affect the roach’s molting cycle include the:

Development of the First Exoskeleton

In truth, newly-molted cockroaches are so rare to see because they are at their most vulnerable right after shedding their skin. They stay well hidden. Nymphs expand by taking in oxygen and filling themselves with air. In the hours after molting, the exoskeleton hardens and turns brown.

After the nymph has developed its first exoskeleton, the molting process begins a few days to weeks later. Remember, the exoskeleton is what holds the cockroach’s body together. As such, the roach can’t break out of its shell without first developing the new skin.

Right underneath the old exoskeleton, the cockroach forms a thin, soft cuticle. This will help it retain moisture. It will also control its muscles once it’s ready to break through the old shell. It is an arduous process. that not all cockroaches manage to survive.

Because the new exoskeleton was formed underneath the old one, it is slightly smaller. In the same way that they did immediately after hatching, the nymphs take in air to expand their muscles. They do this every time they molt until they grow to full size and reach adulthood.

Exoskeletons are shaped like cockroaches and are light brown in color. If left alone, the exoskeleton will eventually become brittle and will disintegrate. When small bits of cockroach skin break up and are scattered by the wind, they can trigger allergies if inhaled.

Without a proper exoskeleton, some roaches lack the strength to exit their old shell and may also injure themselves while trying. Hungry, cannibalistic adult roaches eat many nymphs during the process of shedding.

Before beginning the molt, cockroaches hide in humid, secure spaces. Here, they can be safe while in their weakened state. With their white, unhardened exoskeleton, they are at risk of dehydration when exposed to the air. They also can’t move much, so they need to stay still until their new skin hardens.

It is only during the final molt that cockroaches emerge with their wings and fully developed reproductive organs. Depending on the species, a cockroach will have molted 5-14 times over the span of 1-6 months.

Science Behind A Cockroach Shedding Exoskeleton

According to the Proceedings of the National Academy of Sciences, there are at least 6 different hormones that regulate molting.

The first is 20-hydroxyecdysone, a steroid hormone present in most arthropods. It’s the protein that is in charge of forming the new exoskeleton underneath the old one.

For the cockroach to have a successful molting cycle, it must have a balanced amount of 20-hydroxyecdysone. If the roach doesn’t secrete enough of the hormone, it cannot form new skin.

Researchers have a theory on how cockroaches developed the ability to secrete 20-hydroxyecdysone and perfect their molting process. It’s due to eating plants that produce them. Although phytoecdysteroids are toxic to insects, cockroaches are rarely affected by the toxicity of what they consume due to years of evolution.

Cockroaches can become immune to certain insecticides in the span of a single generation. As such, researchers theorize that after millions of years of consuming phytoecdysteroid-producing plants, cockroaches evolved to regulate the amount. With control over how it affects them, they can leverage its benefits.

The next 4 hormones involved in cockroach exoskeleton shedding are a series of peptide hormones. These are a chain of amino acids that regulate certain biological functions, such as:

Peptide hormones are located in cockroaches’ guts. They ensure that the cockroach has enough strength to shed its exoskeleton. They also help the pest maintain a healthy weight throughout the whole process.

The other hormone in the sequence that shows up later in the molting process is bursicon. This is released after the cockroach has shed its exoskeleton. It triggers the start of the tanning and hardening process in the new skin.

Can Roaches Shed Their Skin To Regenerate?

Cockroaches can regenerate their limbs by molting. However, limb regeneration can cause a disturbance to the molting cycle of a nymph.

When a cockroach loses its leg, a delay in the next molting cycle occurs. This is so that the roach can prepare its body to heal. Once this period of healing is complete, the cockroach can begin the shedding process.

According to the University of Massachusetts, the delay in the molt is not determined by the damage done to the injured roach. Instead, it’s decided by a biological clock that ensures that the molting cycle of a single nymph is synchronized with its brothers and sisters.

The length of the delay can be extended significantly if the limbs are removed one after the next. The last cockroach limb to be removed is the one that resets the next cycle. For example, imagine a cockroach loses a second limb before it can molt and regenerate a new one. It will not molt until the second wound goes through the healing period.

This endangers cockroaches as it leaves them vulnerable to predators due to a lack of limbs. It also delays the molt, forcing the roach to wait to grow bigger and stronger.

Can Cockroaches Shed Their Wings?

If you find light brown wings somewhere in your home, it’s easy to think that a cockroach has shed its wings in that place. However, if the wings were all you found there, it’s likely that they aren’t cockroach wings. Roaches aren’t capable of tearing off their own wings. The only way for them to lose their wings is through getting attacked.

They may in fact not be cockroach wings. Termites are insects that are vsimilar to cockroaches, including the color of their wings. Queen termites rip their own wings off before starting a new colony.

Cockroaches will eat their own shed skin due to the nutrients. This depends on how long the wings have been there and how many hungry cockroaches reside in your home.

What Is a Cockroach Exoskeleton Made Of?

Cockroach exoskeletons are mostly made of a protein called chitin. Chitin is a fibrous material that is comparable to keratin in mammals. It’s the reason why cockroaches have such hard shells.

To put it into perspective, hooves, horns, claws, and fish scales are made of keratin. Chitin makes exoskeletons so tough that cockroaches can withstand 300 to 900 times their own body weight.

Besides chitin, which is made of nitrogen, exoskeletons are also composed of other composite materials, such as sclerotin. When scientists deacetylate chitin, they remove the admixtures and turn pure chitin into a concentrated substance. Through this, we can determine how much chitin is located in each part of a cockroach’s body.

Cockroaches don’t have chitin in their alimentary tracts. That’s because this part of their body is on the inside and does not need to be hardened. What really surprised scientists was the lack of chitin in the oothecal.

These are the sacs mother roaches keep their eggs in. Despite having the same coloring as exoskeletons and their hard exterior, no traces of chitin were found in the ootheca of any cockroach species.