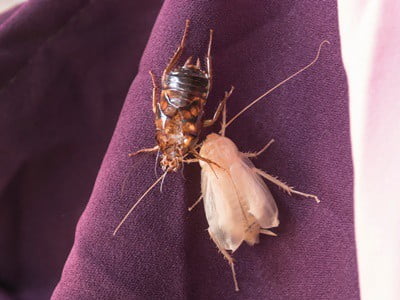 The only thing more shocking than seeing cockroaches is seeing white cockroaches. Like ghosts, there are many rumors about their existence and the meaning behind an encounter with one. However, white cockroaches aren’t as mysterious as people believe them to be. They are no different than your average cockroach.

All cockroaches turn white at various points in their life. As they molt, roaches create a soft new exoskeleton underneath their hard, brown-colored one. This new skin is softer and lacks pigmentation, which makes the cockroach appear entirely white. Once a roach sheds its old exoskeleton, the new, white one hardens and turns brown. This is done through a hormonal procedure called tanning.

Due to the lack of hemoglobin, all cockroaches have white blood. That gives the body inside the exoskeleton a white coloring. Until their shell can properly harden and color itself, roaches will be white. Contrary to popular belief, white roaches are not albinos, nor are they a different cockroach species. They are no more aggressive than normal roaches, but they can be killed far more easily during this vulnerable mid-molt stage.

Cockroaches do not become white. Instead, they start out white. They lack red blood cells, so their inner body is not colored. It’s their outer shell, which has been tanned, that creates their colored appearance.

As such, if the roach has not properly tanned itself yet, it will appear white. That’s because cockroaches are arthropods. These are a type of invertebrate with:

To create this exoskeleton, they need to molt. During the molting cycle, they cast away their exoskeleton, expand, and then harden. Cockroaches molt 4-14 times during their lifecycle. In the beginning, the skin of a newly molted roach is completely white and squishy. The new skin is formed underneath the mold of the old one, so it is slightly smaller.

Depending on the species, cockroaches can either take several minutes to several hours to harden. During this process, they will ‘tan’ their new skin, turning it that iconic brown. According to the Proceedings of the National Academy of Sciences, cockroaches change their exoskeleton color from white to brown due to a neurohormone called bursicon.

If you see a white cockroach, you’re seeing it in this in-between stage. It’s hardening its exoskeleton. If you were to observe it for a long period of time, you’d see it turn brown in color.

Do White Cockroaches Have No Exoskeleton?

White cockroaches are not just household cockroaches without an exoskeleton. In fact, a roach can’t move around without its exoskeleton. Cockroaches depend on this type of shell to hold them together. Without it, they would not be able to align their body properly.

After all, cockroach bodies are segmented into parts. By relying on the firm outer skin, they can control their muscles, wings, and legs. Before getting rid of their old exoskeleton, they grow a much softer one underneath their current one. They do this to ensure their body parts stay in place and to be able to retain moisture.

White cockroaches have an exoskeleton – it’s just very thin. This is enough to keep them alive and functional. However, its thin nature also means it lacks most of its advantages, such as:

Are There Albino Cockroaches?

Spotting a white cockroach is so rare, in fact, that many people believe they’re a whole separate species. That’s untrue. White cockroaches are the same as regular cockroaches.

Furthermore, some cockroach retailers use the ignorance surrounding white roaches. You’ll find scams, online and in stores, about exotic albino cockroaches. These are sold at inflated prices. Albino cockroaches do not exist. Roaches cannot be albino because they do not have the symptoms of this genetic disorder.

Besides lack of pigmentation, albinism is also characterized by a sensitivity to light and astigmatism. These are traits that white cockroaches do not have.

White cockroaches are not hurt by light. They are just good at sensing changes in the illumination of the environment and are surprised by it. White cockroaches scurry from lights just like normal kinds. It’s not because of albinism.

Cockroaches have one of the strongest genetic structures of all arthropods. As such, a genetic disorder is rare in them. Any disorder in their species mostly affects hormone secretion, such as bursicon.

Cockroaches lacking in the bursicon hormone will be unable to molt or grow wings. They’re also more prone to infection. That’s because bursicon is also responsible for removing dead skin cells.

Any cockroach with a genetic disorder that doesn’t allow exoskeletal tanning is consumed by other roaches. That makes it almost impossible to get albino roaches. The existence of a single albino roach is a one in a million chance.

Why Are White Cockroaches So Rare to See?

Since white cockroaches are just normal roaches in their molting phase, you may wonder. Should you be able to see more of them? White cockroaches are rare to find because of how well they can hide. Roaches are at their most vulnerable after molting. Without the protection of their hardened exoskeleton, they are less likely to survive.

They must have a sturdy outer skin that can keep their body in place. Otherwise, they wouldn’t be able to control their muscles. It is also easy for the moisture in their body to dry up. In this state, cockroaches face:

Because of this, before a cockroach begins the molting cycle, it will pick a safe location. This will be a tight, humid, difficult-to-reach spot where it knows it will be secure from predators. The roach won’t come out from that spot until the molting cycle is complete.

Why Do Cockroaches Have White Blood?

Roaches have small holes in each segment of their body, called spiracles. They breathe through these spiracles so that oxygen enters their tracheal tubes and spreads to the cells and tissue. Cockroach blood is 90% water and 10% hemocyanin. That is the protein that carries oxygen through an invertebrate’s body.

A cockroach’s blood will only change from white at a specific time. This is when a female roach is carrying eggs. Mother roaches have blood with an orange tint. That’s due to the vitamins the body produces to nurture the young.

Having an incomplete metamorphosis means baby cockroach nymphs look the same as adult cockroaches. The only difference is that nymphs have underdeveloped wings and genitals. They grow up by going through multiple molting cycles until they mature.

Roaches are white when they hatch, which will be their first molt. However, the white state only lasts until they finish their tanning process and their exoskeleton turns brown. On the whole, baby cockroaches will be no different than adult cockroaches in terms of color.

When seeing a white cockroach, you should still proceed with caution as they are still diseased pests.

According to the Department of Biology at Tulane University, newly molted cockroaches have a higher blood volume than brown cockroaches. If you stomp on a white roach, there will be more blood than if you had stepped on a brown roach. So, it’s more likely that you’ll come in contact with the roach’s fluids.

Another popular myth states that white cockroaches are more aggressive than normal ones. For example, you’ll find tales of white roaches biting or hissing. That’s incorrect. The only known species of roach that hisses is the Madagascar hissing cockroach.

Despite their newly vulnerable state, white roaches aren’t more aggressive. In fact, they’re more prone to fleeing. Cockroaches bite when they are starving and are unable to find food elsewhere. They rarely feast on live humans and don’t rely on us for nutrition. Newly molted cockroaches are driven out of the nest due to:

Pushed out of the colony, vulnerable and alone, the white cockroach tries its best to survive the next few hours until its exoskeleton hardens. When a human encounters a white roach, it may seem more aggressive than a normal one due to the way it’s moving.

Cockroaches with soft exoskeletons aren’t able to control their body well. A white roach in human territory becomes scared and filled with adrenaline, but still unable to escape as fast as it might like to. While it may seem like an aggressively moving cockroach, ready to attack, that’s untrue. It’s afraid as it’s struggling to find shelter.

Are White Cockroaches Easier to Kill?

White cockroaches are a lot easier to kill than brown cockroaches. As stated, normal cockroaches have a hardened exoskeleton that protects them from danger, such as insecticide or being squished.

Insecticide contains neurotoxins, which are chemicals that affect cockroaches’ neurotransmitters. Unable to control their muscle spasms, they flip onto their backs. When they can’t right themselves, they then starve to death. A normal cockroach can get stunned with insecticide, but the exoskeleton prevents most of the poison from seeping into the internal respiratory system.

White cockroaches are not so fortunate. Their soft exoskeleton isn’t thick enough to keep out the poison. White cockroaches that are sprayed with insecticide are never able to regain control of their body again.

Newly molted roaches are more likely to die when stepped on. The average cockroach can withstand 300 to 900 times its own body weight. That means they can sometimes survive getting hit by a shoe. Because of how soft the skin of a newly molted cockroach is, any attack onto their body causes critical damage.

What Does It Mean to See A White Cockroach?

It’s believed that seeing a white cockroach means good luck. However, seeing one white cockroach likely means that you have a serious infestation. Cockroaches like warm, damp, small crevices where they have easy access to food. They live together in a nest, where all the cockroaches:

However, a cockroach colony may grow in size. Due to a lack of space and resources, some roaches get pushed out or are eaten by other cockroaches.

A recently molted cockroach will want to stay as hidden as possible. If it’s out and about in human territory, this means that it’s trying to escape whatever dangers exist in the nest. If a vulnerable cockroach needs to leave its home, you may have a large colony of cockroaches nearby.