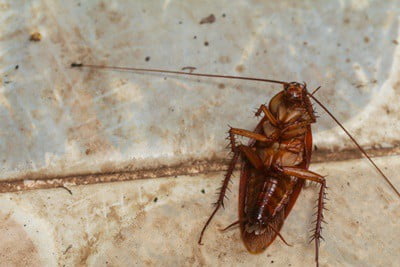 When a cockroach is found on its back, most people assume that it’s a default position that cockroaches assume when they’re dead. If it doesn’t move or react, so it seems like confirmation that it’s actually died.

Cockroaches flip onto their backs when exposed to insecticides. The neurotoxic chemicals compromise the nervous system, so they lose control of their muscles. The muscles spasm violently as the poison takes effect, and the roach flips onto its back. Because cockroaches have a high center of gravity, they’re unable to right themselves.

The cockroach is still not dead. It’s paralyzed and will be forced to lie there until it starves or dehydrates. If a chemical doesn’t poison cockroaches, they rarely die on their backs. Instead, they’ll die on their bellies or sides. In the wild, cockroaches that fall onto their backs use their surroundings to right themselves.

Why Are Cockroaches Upside Down When They Die?

In the home, most cockroaches are found dead on their backs. This isn’t because they have an instinct to flip over when death approaches. Instead, it’s caused by the poison that they’ve been exposed to.

Certain insecticides work by targeting a cockroach’s nervous system. Once compromised, they’ll be unable to control their muscles properly. This creates severe muscle tremors that can flip the cockroach onto its back.

Cockroaches have a high center of gravity. They carry most of their weight on their backs, so they’ll be pinned down. If they cannot reach a nearby object to gain leverage, they’ll be unable to right themselves.

Depending on the poison, they may also be paralyzed for several hours or days. This can prevent them from reaching out and tipping back over.

In this state, cockroaches will starve or die of thirst. They’ll be unable to move, forage, or defend themselves.

How Do Insecticides Target The Nervous System?

Neurotoxins are chemicals that affect the nervous system by stimulating neurons.

Some of these neurons are located in ion channels, which are a type of protein. They regulate the voltage between cells in a cell membrane.

When these neurons are stimulated, they send electrical signals through the nerve fiber. This releases a wave of neurotransmitters.

Depending on the way the neurons are stimulated, the neurotransmitters send signals to:

All that changes when cockroaches are exposed to insecticides. The neurotoxin breaks down the most important enzyme used in neurotransmission: acetylcholine (ACh).

Acetylcholine is the most important neurotransmitter. It plays a huge part in unconscious movements, such as:

When neurotoxins break down acetylcholine, it multiplies it at the same time.

According to the Journal of Insect Physiology, insecticides increase ACh content in the thorax by 300% in cockroaches. The excess amount of acetylcholine is what causes muscle spasms.

With an excess of acetylcholine, the neurotransmitters overstimulate the muscle cells. Instead of moving an inch, the cockroach shakes its entire body until it flips over.

Are Upside Down Cockroaches Alive?

Most insecticides claim to kill cockroaches, but they aren’t always successful. The upside-down cockroaches that you encounter are still alive. If they don’t move when you pick them up, it’s because they’re temporarily paralyzed.

However, this effect does wear off eventually. Depending on the strength of the poison and the immune system of the cockroach, it may take between a few hours and a week to happen.

Quick recovery times are credited to how adaptable cockroaches are. According to Scientific Reports, cockroaches have developed a cross-resistance to insecticides.

Cockroaches that are left alone will later regain their ability to move. However, the weight of their own top-heavy back will pin them down. If you dangled an item above the cockroach, it would grab it. Using the object as leverage, its strong legs would enable it to flip back over.

Why Do Cockroaches Come Out to Die on Their Backs?

After spraying insecticide, it may seem as though half the cockroach population in your home has decided to come out to die on their backs.

The cockroaches have been affected by slow-acting neurotoxins. Since they didn’t kill or paralyze them right away, they continue their business. While they would usually retreat to their nests, the poison may have started to work mid-route.

This caused the cockroaches to flip over onto their backs. When several colony members are affected in this way, it can seem like they intentionally came out to die on their backs, but that’s not the case.

Why Do Cockroaches Die Belly Up?

Not all insecticides are designed to compromise a roach’s nervous system. Depending on the active ingredient, it may also affect its ability to digest food or absorb water.

Some are fast-acting, paralyzing the cockroach within seconds after contact. Others rely on the cockroach spreading the poison to other members of the colony.

The effectiveness of the poison is dependent on the toxicity of the active ingredient. Since cockroaches can be resistant to certain poisons, you need to understand what sprays, bait, and traps are required to eradicate them.

Here’s a breakdown of the different poisons:

When a cockroach is exposed to neurotoxin, it’ll die upside down. If it encounters a poison that doesn’t cause muscle spasms, it’ll die face down.

Insecticides that target the nervous system mean that a cockroach is less likely to survive the encounter, even if it’s resistant to the poison. It’ll be stuck on its back and unable to flip back over.

Cockroaches don’t always die on their backs. They’ll die in whatever position their injury, infection, or lethal dose leaves them. They may stay alive for several days or even weeks. Once dead, here’s how to dispose of cockroaches.