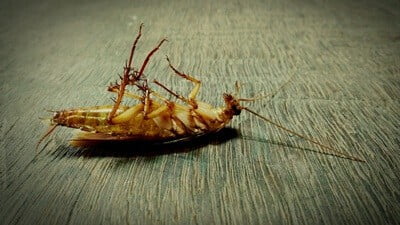 You need to dispose of a dead cockroach quickly and safely to protect yourself from any bacteria it’s carrying. As a result, you’ll want to get it as far away from your home as possible without touching it with your bare hands.

You can dispose of dead cockroaches in a secure plastic bag. Garbage services will take it away for you. If you have a compost pile, you can add dead cockroaches to it. Cockroaches decompose, adding essential nutrients to the soil. Once you’re sure it’s dead, you can flush a dead cockroach down the toilet.

Only handle a dead cockroach when wearing plastic gloves or using a paper towel. Cockroaches harbor bacteria that cause diseases and infections, so don’t risk direct skin contact. Wash your hands throughly once done.

Dead cockroaches can be hazardous to human health. Before dying, they feed on decaying matter and garbage and live in unsanitary sewers. Many people pick cockroaches up when they’re dead to dispose of them, increasing their risk of contracting harmful diseases and infections.

In a study published by Cambridge University Press, scientists identified 30 different bacterial species carried by cockroaches. Pathogenic bacteria represented 54% of all those identified. Similarly, the World Health Organization (WHO) explains how cockroaches carry intestinal disease, such as:

Coming into contact with a dead cockroach puts you at risk of:

If you come into contact with a dead cockroach that’s contaminated with harmful bacteria, you may experience:

Dead cockroaches can no longer eat unsanitary items or breed and increase their populations. However, they are often the sign that there are more cockroaches, meaning you may have an infestation.

Unfortunately, a dead cockroach isn’t a sign that the infestation’s dying out. Cockroaches don’t live for long and die for several reasons, including:

Cockroaches come out at night to forage food and water, but not all of them make it back to their nest. This is why you’re likely to see dead cockroaches out in the open in the morning. As a result, a dead cockroach is the sign of a larger infestation, as mentioned. To know for sure, check for signs of live roaches, such as:

The good news is the dead roaches can help you locate the nests, making it easier to remove the infestation. To check, shine a torch where you suspect cockroach nests to be at night. You’re more likely to see live roaches in the dark.

Dead cockroaches also indicate that your home is primed for cockroaches. If you were previously unaware that you have an infestation, dead roaches mean you have ample:

These are the things that cockroaches need to survive, and they won’t leave until these things are gone or you eradicate the colony.

How To Pick Up a Dead Cockroach

Before disposing of a dead cockroach, you need to understand the best methods for picking one up. You shouldn’t use your bare hands, as you risk disease-causing bacteria getting onto your skin. Even dead roaches are a serious health hazard, so take the following steps to protect yourself:

The best way to protect your hands is by wearing gloves. Either reusable or disposable plastic gloves are suitable for handling cockroaches – just be sure to throw them away or clean them with soap and water straight after you’ve used them. If you want to use them for cleaning again, you’ll need to use bleach to remove any lingering bacteria.

If you don’t have gloves to hand, you can use paper towels. Either thick kitchen towels or toilet paper is suitable, as long as you’re careful not to let your skin touch the dead roach. Flush toilet paper away immediately or bin the kitchen towel in your outdoor garbage can prevent yourself from accidentally touching it.

Use a Dustpan and Brush

Another option is to use a dustpan and brush to prevent direct skin contact. However, this handling method isn’t as sanitary as the other options because bacteria can coat the bristles, spreading germs. Bristles are also tricky to clean. If you plan to re-use your dustpan and brush, give them a thorough clean.

How To Get Rid of Dead Roaches

The next step is to safely get rid of deceased cockroaches to prevent them from contaminating any areas of your home. The best way to dispose of dead cockroaches is to do so immediately:

Make Sure the Roach Is Dead

It may surprise you to know that cockroaches play dead as a survival tactic to evade predators. They also suffer from tonic immobility, which essentially means they’re paralyzed and remain unresponsive when stimulated. This usually happens when a roach comes into contact with an insecticide.

For that reason, you should double-check that the roach is dead before you dispose of it. If you don’t and it’s playing dead, it can re-enter your home, breed, and eat your food, even after you’ve thrown or flushed it away. Either squish the roach or use an insecticide to make sure it’s genuinely dead.

Throw in the Trash

The easiest way to dispose of a cockroach is by putting it in the trash. However, be sure to place it securely in a plastic bag and remove it from your home where it can’t spread bacteria.

Put it out on the street or in an outdoor waste bin ready for garbage services to collect. It’s always a good idea to clean out the bin between each garbage collection with some hot water and bleach to kill any harmful bacteria.

If you have a compost bin, a dead cockroach makes a valuable addition. That’s because, like all organic matter, deceased roaches decompose. The process takes 1-3 days. As they decompose, they release water, nutrients, and energy into the ecosystem, fortifying the soil inside the compost heap.

Throwing dead cockroaches into the compost is one of the most natural and eco-friendly ways to dispose of one. Be sure to bury it in the middle of the pile using gloves so that the body doesn’t attract other wildlife, though.

You can dispose of dead cockroaches by burning them. This is especially effective if you have many dead roaches to get rid of. The flames kill bacteria and germs, eliminating any health hazards. Place the dead cockroaches on a bonfire or in a fire barrel.

Can I Flush a Dead Cockroach Down the Toilet?

You can flush a cockroach down the toilet, as long as it’s dead. The process won’t kill roaches because they can hold their breath for approximately 40 minutes. This is because cockroaches have spiracles that open and close, enabling them to breathe. If a roach isn’t dead when you flush it, it will remain alive and arrive in your sewer, where it’ll reinfest your or your neighbor’s home.

However, when you flush a dead cockroach, the water pressure will push it through the pipes, where it’ll end up in your sewer and get swept through to a sewage treatment plant. This is no different from anything else you flush down the toilet.

Be careful with how many roaches you flush at one time or what you dispose of them with, though, as you could end up clogging the system. Doing so may cause a blockage and make conditions unsanitary for you and whoever else uses the toilet. When flushing a dead cockroach, there are steps you can take to flush it through properly:

If your toilet’s old and in need of repair, you may need to rebalance the pressure to ensure the dead roach travels all the way down it. To do so, follow these steps:

This should help break up any clogs and reset the water levels.

Why Do I Only Find Dead Cockroaches in My House?

As mentioned, you’re far more likely to see dead cockroaches than live ones. Live cockroaches are hardwired to keep themselves hidden for protection. They come out at night when the house falls quiet, as they’ve evolved to know that darkness offers them protection from predators and humans.

Cockroaches die where they fall, and in many cases, they die before they’re able to return to the nest. Unfortunately, if you only see dead cockroaches, you could have an overpopulated colony.

Roaches take more risks when too many of them migrate during the day to compete for food, water, and shelter. It’s only natural that an overpopulated colony will experience a higher level of deaths than usual, which is why you’re more likely to see dead roaches more than live ones.

An overload of dead cockroaches is a sign that your house is overrun. The good news is that if you’ve been using insecticides or baits to get rid of a known cockroach infestation, dead roaches mean the poison’s working. You’ll see dead roaches because they can’t make it back to their nests before they succumb.

Are Roaches Attracted to Dead Roaches?

Unfortunately, cockroaches eat other cockroaches if no other food is available for them to eat. While it’s not their first instinct to do this, they’ll resort to cannibalism to:

So, roaches are attracted to their dead kin because they make a nutritious meal. This behavior is a self-preservation tactic that also benefits the ecosystem by contributing to the nitrogen cycle. According to Biotropica, cockroaches are a clade of detritivore-herbivores that always eat detritus, such as:

Cockroaches don’t leave dead cockroaches to rot. They tidy up the mess by eating the corpses, ensuring nitrogen’s released into the air, benefiting the environment.

That being said, cockroaches don’t eat their dead as soon as they die. During death, cockroaches release oleic acids that produce a “death scent.” This foul odor warns other roaches of potential dangers. It fades over time, and if cockroaches are hungry enough, they’ll bypass the warning to consume the dead roach.

There are methods you can use to dispose of dead cockroaches. Check that they’re dead first and do everything you can to minimize the risk of direct skin contact. Cockroaches are more hazardous than you may think.