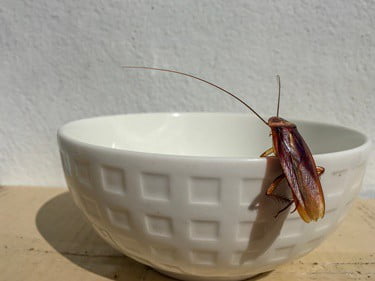 Roaches don’t show any clear signs of aging. Once they’ve hatched, they’ll look like smaller versions of adults. Throughout their lives, they can regenerate from injuries and survive long periods without food or water. Roaches do have a fixed lifespan, like any other living creature.

During this time, cockroaches will lay up to 200 eggs, ensuring that a short lifespan doesn’t impact the species’ ability to multiply. Even still, cockroaches rarely die of old age. Instead, their lives are ended by insecticides or predators. If cockroaches do reach old age, they begin to lose the use of their legs and eventually starve.

The cockroach lifespan is comparatively short by human standards, lasting about 6 months. However, by insect standards, roaches can be long-lived, with certain species thriving for up to 2 years.

If the cockroach doesn’t encounter any issues, it can reach its full lifespan. The amount of time this encompasses depends on:

Let’s look at the lifespan of the most common household cockroaches:

How Long Do German Cockroaches Live?

Known as Blattella germanica, German cockroaches are one of the smallest in the world. They have an average life expectancy of 100 to 200 days.

During this time, a female German cockroach will produce at least 5 ootheca or egg casings. These will develop into about 200 progeny. The female will carry the eggs for about 3 weeks after only 3 days of mating.

How Long Do American Cockroaches Live?

American cockroaches are the largest of all household species. To match their impressive size and wingspan, they can live for about 1 year. Females live longer than males.

Despite their name, they’re native to Africa and parts of the Middle East. They mainly inhabit dark, hot environments or underground bunkers and basements. These warm habitats may be responsible for the longer life expectancy.

Their long life expectancy means that American cockroaches don’t need to reproduce as often. Since females live longer than males, they can mate and care for eggs for longer. They’ll lay about 16 eggs at once. Their offspring take longer to molt and grow, but their longer lifespan facilitates this.

How Long Do Australian Cockroaches Live?

Known by its scientific name Periplaneta Australasiae, Australian cockroaches are quite similar to American cockroaches. According to The Journal of Indian Zoology, they’re 1.2 to 1.5 inches long, slightly darker in color, and have yellow coloring on their wings. Their lifespan is 4-6 months.

During this time, Australian cockroaches can produce anywhere from 20-30 egg cases. Each case will hold 25 eggs, meaning that their population can explode in short order. They thrive in balmy conditions.

How Long Do Oriental Cockroaches Live?

Oriental cockroaches prefer the damp areas of your home and the wild. The males have tiny yet fully-developed wings, while females bear incomplete wings. However, neither males nor females can fly.

Oriental cockroaches have a lifespan of 4-6 months, making them one of the shortest-lived of their kind. Oriental roaches quickly produce over 200 offspring per female.

If a cockroach only has a few months to live, it needs to complete its life cycle quickly. Longer-lived species will still grow with the same urgency, but additional molting stages are required due to their size. This means that American cockroaches will develop just like Oriental roaches but will spend more time in the juvenile stage.

Once cockroaches reach sexual maturity, they’ll start breeding. After all, they may only have 6 months to feed, survive, and create another generation. They’ll also need to produce a surplus of offspring, as many won’t survive to adulthood.

On average, female cockroaches will lay 10-16 eggs at once. Some varieties, such as German cockroaches, reproduce at a much faster rate. They can lay up to 30 egg cases with 25 eggs apiece each time.

Cockroach eggs are sheltered in a hard covering known as ootheca. Without this covering, most eggs would never reach the next stage.

No matter the quantity, eggs will usually hatch in 45 days. Since most species of roaches don’t care for their young, the female can quickly find a mate and restart the process.

Roaches go through the mating season just like many animals. They prefer to time hatchings with warm spring or summer months, so pheromones are activated when it’s time to breed.

When the eggs hatch, baby cockroaches will emerge, looking like mini-adults. At this stage, they have smaller wings or none at all. They’re considered juveniles and will begin the longest period of growth, lasting several weeks (or only a couple, depending on the species).

Nymphs will molt off their exoskeleton and regrow it in a larger size so that they can grow into adults. For smaller and shorter-lived species, this may take place 5-8 times. For larger species, there’s time to spare with their 12-23 months of life. They’ll molt 10-13 times before reaching adulthood.

Upon reaching adulthood, a cockroach will have grown to its full size and become sexually mature. This allows it to find a mate by releasing pheromones from its body. Other cockroaches will detect this with their antennae.

They may have only days or weeks to create another generation before their time is up. Longer-lived species will create offspring more gradually while seeking ideal places to nest and develop a colony.

How Long Do Cockroaches Live?

Of course, knowing the lifespan of a cockroach doesn’t determine precisely how long it’ll live. Cockroaches are a prey species, so they’re hunted by other insects or animals.

Roaches are also a household pest, making them a target of insecticides. At the very least, extreme weather conditions and food shortages can shorten the lifespan of a cockroach.

According to Southwestern Entomologist, 40% of American cockroaches die when exposed to temperatures of between 46-50 degrees Fahrenheit long-term. They will initially go into a hibernation-like state where they will remain for several days. However, in about 72 hours, most will lose organ function and die.

If they do survive, their life expectancy will be reduced. The surviving roaches from the above test were placed in warmer temperatures. They recovered after 48 hours. However, they had limited movement capabilities. Many of these roaches ended up inverted, laying on the ground non-responsive, or didn’t recover their full running speed.

This disadvantage not only makes it harder for the roaches to find food. It also makes them more vulnerable to predation, which compounds their short lifespan.

Cockroaches are hardy creatures designed to overcome the challenges of their environment. Even if the adults struggle in low temperatures, roach eggs are far more resilient against the cold. They are the future of the species, so the short lifespan of adults must be compensated for by their offspring reaching adulthood.

According to Biological Control, eggs must be exposed to temperatures of 23 degrees Fahrenheit or lower to die. Additionally, they must endure these low temperatures for more than 5 days before they’ll fail to hatch. That’s because roach eggs will extend their incubation time if they’re left in sub-optimal conditions.

According to the Indiana Academy of Science, nymphs will also take longer to grow in cooler temperatures. When kept at 77 degrees Fahrenheit, nymphs will require approximately 164 days to reach maturity, depending on their species. In contrast, when kept at 84 degrees, certain nymphs only take 92 days.

At higher temperatures, cockroaches thrive. In fact, they prefer the same temperature range as humans. That makes our homes an ideal sanctuary, ensuring a longer life expectancy.

Without temperature-controlled areas, the lifespan of cockroaches varies. They’ll thrive at 75-83 degrees Fahrenheit. When this temperature climbs, a few days or weeks can be shaved off their lifespan.

Nonetheless, roaches can tolerate heat at up to 122 degrees Fahrenheit. The more extreme the temperature becomes, and the more sustained it is, the more damage it causes. This could bring a cockroach to a premature end.

Lack of Food Or Water

Cockroaches may only have an average of 6 months to live. However, they make this time last due to their resiliency and durability. Cockroaches can survive for up to 50 days without food. Some species, such as L. Maderae, can even endure 50 days without getting any water.

However, this will depend on the species and its surrounding environment. According to the Journal of Economic Entomology, cockroaches can leech water from the air with their unique exoskeleton design. They can absorb liquid through their ‘skin,’ so 30-40% humidity enables them to survive longer when there are limited water sources.

When kept at 80 degrees Fahrenheit, male American cockroaches lived without food or water for 5 days. However, females could stretch this out for up to 6 weeks.

It’s not yet proven if their lifespan is recovered, should they find food and water immediately afterward. However, one theory posits that it does lower a roach’s ability to function with the same speed and resiliency.

Cockroaches that live in the wild rarely get to enjoy old age. Birds feed off of wood roaches more than any other predator, but cockroaches may also fall victim to:

Wasps are the main destroyer of ootheca. When a wasp lays its own offspring in a roach egg case, the clutch is destroyed. If you have the Evania wasp in your home, there is a chance you have an infestation of roaches.

Cockroaches are also a danger to themselves. According to the Southwestern Entomologist, cockroaches practice cannibalism. They will feed on other adults due to overcrowding in their nest. Likewise, they will devour their own eggs when facing a food shortage.

Do Roaches Die of Old Age?

Most cockroaches don’t survive for long enough to die of old age. They are killed off by pesticides, other cockroaches, predators, food shortages, and sometimes infections. However, some cockroaches do survive until they have trouble walking. Older cockroaches show troubled locomotion, especially when moving on inclines.

For a 60-week-old adult cockroach, the front legs experience a limp, causing them to stumble at times. They may struggle and fail to pick themselves back up. At this age, losing the ability to walk is a 35% chance.  Incidentally, at 65 weeks of age, the chances of this happening rise to 95%.

If unable to walk, a cockroach will not immediately die. However, it’ll be unable to find food, be more vulnerable to pesticides, and fall victim to predators. This will shorten its lifespan, so it’ll starve within days or weeks. Roaches can die of old age, but it won’t be from organ failure, like many creatures experience in their twilight years.