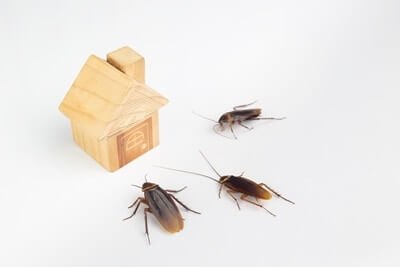 When you think of cockroaches, you’ll visualize a medium-sized bug. For example, American cockroaches are 1.5-2 inches long and flat in shape, making these pests easy to identify. This can leave you puzzled when you see a smaller bug scurrying around your home. You may believe that you’ve spotted an insect that looks like a cockroach.

To tell cockroaches and other bugs apart, check their physical characteristics and behaviors. They should be flat in shape with no pincers. They won’t live in water, even if they like living near it. The diminutive size of German and brown-banded cockroaches enables them to fit in tiny spaces, such as cracks in walls and electronic appliances.

What Are Small Cockroaches Called?

Small cockroaches are primarily defined by their age and species:

When roaches are first hatched, they’re called juveniles or nymphs. Shortly after hatching, they’ll harden their first exoskeleton and turn a brown color. Once they reach this stage, they’ll be almost indistinguishable from adults.

This can lead you to believe you’re dealing with a tiny cockroach. In a way, you are – but it’s not a unique breed. As they molt and grow, nymphs will gain weight and size.

The American cockroach is one of the most common household pests. They measure close to 2 inches in length, while baby cockroaches will only be a ¼ inch in length.

After this growth period, cockroaches reach adulthood and have reached their full size. Even at this stage, certain species are smaller than others. There are over 4,500 species of cockroach across the world, each of them varying in size. For the typical household, you’ll only ever see four different species:

The most common species is the German cockroach, which is the second smallest variety. This diminutive pest can be ½ to ⅝ of an inch long. At the lesser end, that’s similar in size to a large ant.

How Small Can Roaches Get?

With such a substantial number of species, you may wonder how small a cockroach can be. Here’s a chart:

Female cockroaches will usually be slightly larger than males. Female oriental cockroaches are 1 ¼ inch in length, while the males are usually an even 1 inch.

If you’ve spotted a bug and immediately thought, “Is that a tiny roach?” then it’s unlikely you saw an Oriental cockroach or American cockroach. These are easily recognizable as they’re the larger types of cockroaches.

Across all common household species, brown-banded cockroaches are the smallest. Even as adults, they can easily escape your notice or be mistaken for other bugs. As nymphs, they’re even tinier – some being half the size of a fly. This roach’s small size doesn’t make it any less of a problem. Instead, it allows them to more easily infest:

Their small size allows them to sneak in through small vents, nestle up against tiny components, and avoid moving parts easily. Once inside, they’ll breed and multiply.

While most cockroaches like moist areas, brown-banded cockroaches are different. They prefer dry areas, so they’ll seek out temperature-controlled locations. This may include electronics, but also:

The brown-banded cockroach also likes to place its eggs in lofty areas. This may include along your ceiling or in corners with molding. Since they’re expert climbers, this won’t be difficult. If you find tiny bugs skirting along the corners of your ceiling, they may be egg-carrying roaches.

How To Identify Brown-Banded Cockroaches

Here are the physical characteristics of brown-banded roaches:

The nymphs have two brown bands on their wings. These bands may be more pronounced and obvious in nymphs. They will appear once the juvenile has finished molting and has browned up.

This species takes to the air more often than others. However, females are unable to use their wings. However, the males don’t hesitate to fly when they’re disturbed.

German cockroaches are the second smallest roach found in U.S. homes. You may struggle to tell this at a glance, as they may be just as small as brown-banded cockroaches.

However, the true domain of the German cockroach is where food is being prepared. Commonly, these pests are found in commercial areas where food is present, like factories and markets. Inside homes, the same is true.

How To Identify German Cockroaches

You will be able to identify German cockroaches by their:

Nymphs also have lines on their backs. However, they differ from adults due to the shade of the rest of their bodies. Juveniles are a shade darker than the adults, a deep brown that is almost black. Nymphs also do not have wings. As they grow, they will slowly develop the stripes on their back, and their coloration will become lighter.

How Small Are Baby Cockroaches When They Hatch?

A baby cockroach, or nymph, will be at its smallest when it hatches. This is the point where their average measurements are judged. However, as a cockroach grows, it will molt several times and gain in size.

So, a German cockroach nymph is a 1/8th inch when it hatches. As an adult, it’ll grow to a little over a ½ inch. Just because the roach you spot isn’t a ½ inch doesn’t mean you’re handling a new kind of roach.

Are Larger Roaches A Bigger Problem?

This misguided theory can lead some to believe that small roaches are less of a danger. However, that’s not the case.

Since parasites, fungi, and bacteria are microscopic in size, they don’t require a large creature to carry them. A small cockroach can carry the same amount of contingents as a large one. However, you might find they’re more dangerous due to their dexterity. According to the International Journal of Scientific Research, roaches can carry:

Roaches cause allergies. According to Allergy Asthma and Immunology Research, roach allergens tend to be more disruptive in children compared to other allergens.

Brown-banded cockroaches are more likely to fly than other species. This gives them greater access to new locations.

Cockroaches may struggle to climb glass. Without any minor footholds, a roach can’t scale it like other materials. By flying, it can circumvent the problem. It’ll land on food in elevated positions and be able to escape danger.

A smaller size means roaches can sneak into smaller areas. Even a gap that’s 3 mm can provide a roach entry. However, the smaller the roach, the easier entry becomes. This allows German and brown-banded cockroaches to:

This provides the roaches with more places to:

As such, size doesn’t, by default, make a roach more or less dangerous. However, if you consider how much access a cockroach can get, smaller species will likely be more troublesome.

Are Roach Nymphs A Problem?

Nymphs are more concerning than adult roaches, but not because of the physical damage they can cause. Instead, nymphs indicate that the population is growing and multiplying.

According to Oklahoma State University, German cockroaches have more eggs in their egg cases than any other species, ranging upwards of 30 to 40 eggs per ootheca.

The appearance of small nymphs means you could have hundreds or thousands of cockroaches living in your home. Once these nymphs have grown into adults, about 103 days later, they can lay their own eggs. This creates a dangerous cycle that’s difficult to break.

What if you notice a small, white roach in your home? Roaches can be white, but that’s not a permanent color. Instead, that’s how their exoskeleton appears before gaining their brown coloration.

Within a short time, the cockroach will harden its skin and develop its classic brown or black color. That’s true, regardless of the species. If you see a white roach, you’ve seen a nymph in the middle of its molting process.

If you see a bug scurrying across your floor, it won’t always be a cockroach. It’s important to tell the difference, as insects of every kind require different extermination methods. Here are small bugs that are mistaken for roaches.

Beetles often have the shape and exoskeleton of a roach, especially ground beetles and June bugs. Although there are many species of beetles, most of them have a brown or black coloration. Oriental cockroaches are often referred to as “black beetles,” because of this resemblance.

You can tell the difference by the rounded shape of a beetle, while roaches are often flatter.

Although some wild cockroaches do make chirping sounds, it’s a quiet sound. When you hear chirping, it’s safe to assume that it’s crickets.

While “water bugs” is often a name used to refer to roaches, water bugs can also refer to other bugs. Specifically, this term can refer to true water bugs, which belong to the family Belostomatidae. Unlike roaches, these true water bugs do live in water. You can also tell the difference by:

Whether you’re dealing with a small roach species and nymphs or a different type of bug infestation entirely, it’s always wise to address the infestation in your home. Placing traps and using bug sprays can be beneficial in the short term, but you really need to hire pest control experts to make your home safe again.