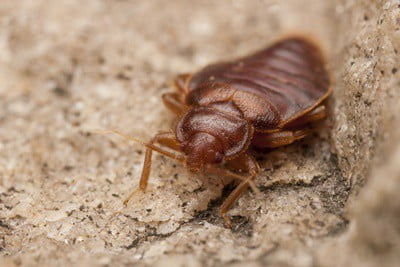 Cockroaches and bed bugs are two of the most common household pests. Having them both at the same time is a bad situation, so you may wonder if cockroaches can get rid of a bed bug infestation.

Cockroaches will eat bed bugs. Unfortunately, bed bugs breed faster than cockroaches can eat them, so they won’t be able to reduce their numbers. You could have a cockroach and bed bug infestation at the same time as they’re likely to live in different areas of the home. Bed bugs like bedrooms, while cockroaches like kitchens.

While cockroaches will consume bed bugs, they’re an unreliable pest control method. Instead, you should eliminate both infestations with pesticides or heat treatment, which will kill both pests simultaneously.

Cockroaches are adapted to eating rotting or decomposing matter, which means they’ll eat virtually anything. Bed bugs are only the size of apple seeds, so they can easily be consumed by cockroaches.

Can Roaches and Bed Bugs Live Together?

It’s unlikely that cockroaches and bed bugs will live together in the same part of the house. While cockroaches will live in bedrooms, it’s not their preference. The bedroom is the preferred domain of bed bugs.

Unfortunately, you can have cockroaches and bed bugs at the same time. When this happens, both of these resilient pests will infest different parts of the house.

Cockroaches are motivated by access to food, water, shelter, and safety. They’ll live where they have easy access to these resources, which is usually in a kitchen or bathroom.

Bed bugs get the nutrients and water they need from consuming human blood. So, they infest areas near people, where they’ll emerge while we’re sleeping.

Cockroaches can run much faster than bed bugs, meaning bed bugs don’t stand much chance against them. However, you’d be mistaken if you think cockroaches could remove an entire bed bug population.

Bed bugs breed faster than cockroaches could eat them, causing your home to be overrun. Bed bugs are also difficult to find as they’re so small and reside in places that cockroaches can’t access.

Cockroaches are most commonly found in kitchens and bathrooms, while bed bugs live in bedrooms as they need a human host. The likelihood of them coming into contact is slim.

Are Cockroaches or Bed Bugs Worse?

Cockroaches are bad because they:

Both cause distress and anxiety, so neither can be considered better than the other. You’ll notice that infestations are far worse in the summer because bed bugs and cockroaches have faster metabolisms when it’s warmer.

Are Bed Bugs or Roaches Harder To Remove?

According to PLoS One, some bed bugs have pesticide-resistant genes. Cockroaches have become increasingly resistant to bug sprays, making them difficult to kill.

The best way to kill cockroaches is with poisoned food. Using glucose bait traps is one of the most effective ways to kill an entire colony of cockroaches.

One cockroach eats the poisoned food before succumbing a few hours later. Cockroaches will eat their dead kin, ingesting the poison and dying within days.

Unfortunately, this method doesn’t work for bed bugs, as they feed on blood. However, you can kill bed bugs and cockroaches simultaneously with heat treatment.

This method raises your house’s temperature to 120 degrees or higher. The higher the temperature, the quicker the treatment will work. The heat should reach the whole room, so you’ll need specialist equipment and preparation.

What Are Natural Predators of Bed Bugs?

Cockroaches aren’t the only creatures that eat bed bugs. There are other natural enemies that will eat bed bugs if they find them.

Also known as Reduvius personatus, masked bed bug hunters are small, black bugs measuring between 17 to 22 mm long. They belong to the assassin bug family (Reduviidae) and camouflage themselves with dust using sticky substances that cover their entire body.

While they’ll help you with your bed bug infestation, they have a painful bite similar to a snake. They don’t feed on blood, but they’ll bite if they feel threatened.

Pharaoh ants are almost transparent ants that look similar to household ants. They’re honey-colored, not black. Although their origins are unknown, they’re commonly found in America and Europe.

They breed continuously throughout the year in heated buildings, creating nests where breeding occurs. Pharaoh ant queens can lay hundreds of eggs during their lifetime, causing a significant infestation problem.

Pharaoh ants aren’t effective at eradicating bed bugs as they feast on larger populations that are hard to control. However, they can enable you to locate where bed bugs are hiding.

Beware if you see a pharaoh ant in your home, as they spread disease and are considered dangerous to humans, presenting an even more significant health risk than bed bugs.

However, they pose no danger to humans, so having some around the house could keep insect populations at bay.

House dust mites are mainly found in dusty environments. They’re so small and translucent that they’re barely visible to the naked eye.

Dust mites mainly feed on dead skin from humans and animals and some mold. They also eat bed bugs, largely because they inhabit bedrooms where they reside. Bed bugs provide an abundant food source.

They’ll also feed on other allergenic mites and silverfish. House dust mites aren’t a good form of bed bug pest control as they cause human allergies.

They set up home in mattresses, carpets, and upholstered furniture. However, unlike bed bugs, they don’t feed off blood and rarely bite. Most people can live alongside them without knowing they’re there.

While bed bugs have several natural predators, the only way to get rid of them is with treatments. You’ll create a second pest problem if you introduce cockroaches to your home to remove bed bugs.