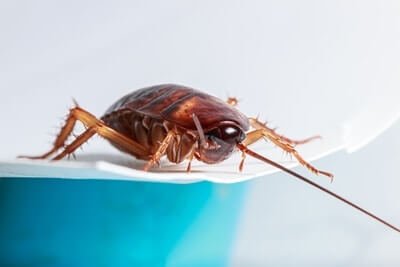 Cockroaches scurry into places that they don’t belong. This is true whether they’re running across the floor or scuttling across countertops. They can even scale objects, like your table legs or ceiling. This unique ability to move is an evolutionary talent that has enabled roaches to survive worldwide.

To move around, cockroaches use six legs in a process called hexapod locomotion. The legs are used in pairs of two, making up three pairs in total. The first pair of legs enables roaches to brake and corner. The second pair gives roaches more stability and speed. The final pair gives roaches dexterity and power.

Roaches move in sprints, taking breaks in between to conserve energy. To make these sprints even faster, they lift, move, and push off with their legs in a specific pattern. It enables them to cling to surfaces and move at an impressive speed, which is up to 50 body lengths a second.

How Cockroaches Run With Six Legs

Cockroaches have six legs, but they don’t run on all their legs at once. Instead, they use the legs in pairs. Two legs move with one step, followed by another two, and then another two. A cockroach runs with three pairs of legs in total.

It’ll just be difficult for you to see this since roaches will use these pairs in quick succession. This type of movement has many advantages, which include:

These legs go up and down in a motion similar to a pogo stick or pendulum when moving. This enables the roach to build up momentum and improve its speed. The legs are also equipped with thick muscle bundles. These assist by making the roach faster and more dexterous.

The back or front leg on one side will move simultaneously with the middle leg on the other side of the body. This enhances their stability, even when it’s at high speeds. Because it’s properly grounded, it can even move on flat surfaces. This will include types of plastic, table legs, or walls.

The structure and design of these legs are evolutionary. They’ve assisted the cockroach in surviving in various parts of the world, where predators are in abundance. By having more legs – each with its own advantages – roaches can rely on one set of legs over the other as needed. Here are the six legs based on their locations on the thorax:

These are located close to the head. The prothoracic legs are the shortest. The roach uses them as brakes when running. A section of the prothorax, where these connect, even provides cover for the head of the roach.

These legs are located in the middle of the roach, which explains the name. When it runs, these legs engage in a back-and-forth motion, propelling it forward. Roaches also use these legs to adjust their speed since the mesothoracic legs can move quickly or slowly, depending on their needs.

These back or hind legs are elongated. This allows cockroaches to reach out and push off from a wider surface area so that they never miss a step. These legs are also thick and muscular in comparison to the other sections. Because of this, they’re responsible for powerful movements that propel the cockroach forward.

The metathoracic legs improve the roach’s ability to corner or quickly turn. That’s because they work in sync with the joint between the head and thorax segments. This joint works in a way that is similar to the ball and socket joint in humans. It provides greater freedom of movement.

How Fast Can Cockroaches Run?

A roach can move as much as 50 body lengths per second. This is equal to a human moving at 200 miles per hour.

Cockroaches have been observed to run in bursts, with lulls in between. According to the Journal of Experimental Biology, that makes roaches more like sprinters. They will take off in a mad dash, gaining impressive speeds. Then, once they’ve escaped the immediate danger, they’ll slow down again and stop. If danger keeps coming, they’ll jerk away in another burst but do not run constantly, even when they’re being pursued.

Whenever a cockroach is bursting along at this top speed, it can lift and run on the back legs alone. By manipulating the aerodynamic forces, the roach can remain stable even at top speeds. That’s accomplished because a roach moves its legs in both directions, at around 27 times each second when speeding.

Can Roaches Run Upside Down?

Roaches can sprint upside-down on surfaces like the ceiling. To accomplish this, they have evolved to take longer steps, helping them remain stable and avoid falling.

With that said, it takes an exceptional amount of energy for the cockroach to run upside-down. It’ll prefer scampering up vertical surfaces like the walls. You won’t often find roaches on the ceiling.

Whenever a cockroach moves at its top speed, the legs move back and forth almost 30 times per second. However, when running upside-down, it needs stability, so the longer steps will slow it down. Few predators can follow it across ceilings, so this speed isn’t necessary.

How Many Legs Do Cockroaches Have in Total?

As stated, cockroaches have a total of six legs. The three pairs of legs have different lengths and functions. However, they have similar parts that move in the same pattern.

Each leg is covered with pointy spines that look like hair, which is called setae. The fleshy upper part of the leg is known as the coxa. It links the leg to the thorax.

Other parts of the roach leg are just like the anatomical equivalents of the human leg. Let’s show a comparison:

This part of a roach’s leg works as a knee. It allows the roach to bend its leg to bring it forward, extend, and propel forward.

This part is segmented into two pieces. It works like a foot and an ankle. The tarsus resembles a hook and can be helpful for the roach when it’s climbing on walls or walking upside-down.

In a roach’s leg, these two parts are much like the thigh and shin bones. They strengthen the cockroach’s legs, so it can use more force to run forward.

Even a headless roach will keep moving. According to the University of St. Andrews, roaches can continue walking without their heads. This was proven through tests, where decapitated roaches were studied to:

This persisted for several tests until roaches eventually starved. Don’t count on a headless roach being unable to escape. Their ability to move and run won’t be affected by blood loss or trauma. That’s because roaches do not have the same networks of blood vessels as human beings.

They make use of what is called an open circulatory system. This features a relatively lower level of pressure. So, for a headless roach, the neck will be sealed off via clotting. There will be no uncontrolled blood loss whatsoever. The resilient roach will continue to breathe through its spiracles, which move air straight into its tissues.

Although blind (and not too smart), the roach will continue to wander around, looking for food it can no longer eat.

If a roach loses all of its legs, then it will be unable to move. However, if it only loses one or two – or even half of its legs – it can continue to function. It will just be slower as it navigates around your home in search of food. Over the course of a few weeks, these legs will regrow. In the meantime, however, the roach will deal with its leg loss by:

Cockroaches are also referred to as poikilotherms, meaning they are cold-blooded. Therefore, they do not need as much food as human beings or other mammals. In this way, a roach can survive for months on just one single meal. Even if its amputation makes it harder to locate food, a cockroach can still get by.

The roach will remain alive and will keep moving as long as a predator does not eat it. They may also get infected by a microorganism, which could eventually lead to death.

What Is The Movement Of A Cockroach Called?

The movement of a cockroach is called hexapod locomotion, according to the Oxford Handbooks. This form of legged movement is seen in various insects. It’s described as the fundamental patterns of coordinated movement, both within the leg and the other legs. The nervous system controls the legs and how they move. This is done with:

These are localized systems of control that exist inside the thoracic ganglia. They heavily depend on pressure receptors in the leg so that they can monitor joint movement. These systems can be changed, though, depending on if the roach:

This locomotion style has made cockroaches and other insects very talented. Cockroaches are found all over the globe. How easily they move and how quickly they adapt to new terrain has greatly influenced this. In fact, the agility of cockroaches is one of the leading reasons for their survival rate, no matter the circumstances. They have evolved to fly, run, walk, or even jump nearly any surface.

Some robotic departments are studying how cockroaches move to build more effective machines. If they can walk across nearly any terrain – and do so very effectively – our robots could benefit from learning how to do the same.

How Cockroaches Move With Wings

According to the Natural History Museum, there are over 4,000 species of cockroaches. A good number of them have wings, especially the larger breeds. The largest winged cockroach is the Megaloblatta blaberoides. Found in South and Central America, it boasts a wingspan reaching as much as 185 millimeters – or a little over 7 inches.

The front pair of wings are thick and offer protection to the insect. They have the same coloring as the main body of the roach. They lay in a resting position on the insect’s back when not in flight.

If they do take flight, these front wings will remain in a lifted position. This exposes the back wings and also works to angle and guide the roach during flight.

The back pair of the wings are protected and hidden under the front pair. They only emerge when the roach leaps into the air. In preparation for flight, the roach will raise the front wings to expose the wings at the back. The structure of the back wings is thin, membranous, and clear.

How Cockroaches Move Without Wings

If a winged cockroach loses its wings, it will be unable to fly. However, this will not affect its ability to run, jump, or roll back onto its feet. Its legs will still support its body, help it quickly dash away, and turn corners effectively. It will be forced to rely on these legs, with no help from its wings, but that won’t be devastating.

Since most roach species do not have wings, these appendages don’t affect their ability to move. Wingless cockroaches are no less dexterous than winged cockroaches. They will just be restricted to the ground.

Roaches have complex and interesting ways of moving. By exploring how their limbs work to reach high speeds and maintain, we may develop better ways of moving ourselves.