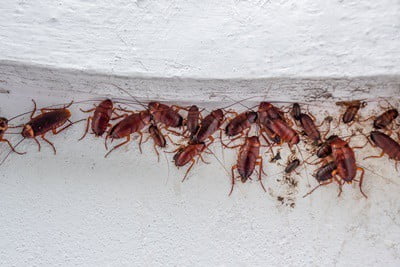 Cockroaches are perceived as being mindless insects that scurry around in search of food and shelter. They don’t appear to be loyal to each other nor smart enough to avoid traps. Since they’re such small bugs, you may think that cockroaches don’t have a brain. If roaches do have a brain, it must surely be too small to perform useful functions.

Cockroaches have a technical brain and a bundle of complex nerves that serve as a second brain. The main part of the brain organ is located in the head. Other parts of the brain that control breathing, movement, and basic nervous responses are found throughout the body.

Roaches have multiple evolutionary advancements involving their brains. These allow cockroaches to learn, communicate, and make decisions based on memory. In fact, researchers have found that cockroaches are capable of retaining lessons taught to adapt their behavior. Because of the complex structure of their two brains, cockroaches can even live for up to a week without a head.

Do Cockroaches Have Two Brains?

It is rumored that cockroaches have two complete brains. One is in the head, while the other is supposedly in the butt. To make things even more confusing, you’ll find this is technically untrue and practically true.

Cockroaches have one traditional brain. Throughout the rest of their body, they have nerve clusters that are responsible for more functions. In the technical sense, these nerve clusters are not a brain. Roaches do not have two brains from a purely scientific point of view. In practice, however, this bundle of nerves acts as a second brain.

The brain structure itself differs from humans and other mammals. Instead of traditional lobes, these tiny brains are shaped like mushrooms and are sensitive to vibration. When testing the different functions of the cockroach brain, scientists found that even a cart rattling outside the room could disrupt the tests.

This brain structure is broken down into several pieces called mushroom bodies. When these bodies work in tandem, a roach can navigate its surroundings and process stimulation with impressive accuracy.

Learning Memory states that mushroom bodies have been studied for over 150 years for their relationship to the intelligence of insects. The same study notes that these bodies are also critical for short-term memory in odor discrimination tasks.

As for neurons, roaches make do with their limited space by packing them extremely tight. Mammals, in contrast, have neurons that are packed 10 times less densely than a roach. With them, a roach brain processes information gathered by its antennae. These are located on the head and detect sound, smell, and vibrations.

What Does A Roach Brain Do?

A roach’s main brain dictates most of its regeneration abilities and pheromone production. The head stores its hormones, which allow it to molt and grow. It also indicates when its body should deploy scents to communicate with nearby cockroaches. This brain’s main functions are to:

Now we have the ‘second brain.’ This is not a mushroom structure, nor does it contain neurons or brain cells. Instead, it’s a complex bundle of nerves known as ganglia. These resemble tendrils that spread throughout its main body. While the ganglia are far-reaching, the nerve tissue is mainly focused in the back end of a roach’s body.

A cockroach’s limbs rely on these nerve bundles to function. If a roach loses its head, these ganglia will still move the roach from place to place. Base instincts, such as looking for food, will remain. With ganglia alone, a roach can:

However, without its main brain to distribute hormones for growth, it cannot repair its body in any way. It will also be unable to locate food and will eventually starve.

What Does A Roach’s Second Brain Do?

A roach has two brains in practice, but not in a technical sense. While most creatures pile all their executive functions into their one brain, roaches spread this out. Their ganglia run the body and maintain its functions. Their ‘real brain’ focuses on food, communication, and regeneration. One cannot live forever without the other.

The ganglia are basic brains that can receive and interpret stimuli. They can act independently of the main brain and carry out basic nerve responses. For example, imagine a cockroach is bumped, walks through a substance, or its main body comes into contact with a poison. These ganglia will absorb that information, translate it, and send commands throughout its body to respond.

How Big Is A Cockroach Brain?

Since roaches are small insects, you’ll find their primary brain mirrors this. The real brain will be the size of a pin. It may even be smaller, depending on the species.

In contrast, ganglia clusters are not large but wide. They’re found in every segment of the body. This spread-out structure allows the roach to interpret information no matter where it comes from.

Where Are Cockroaches’ Brains Located?

The main brain of the cockroach is located in the head cavity. The second brain is spread out.

The Journal of Visualized Experiments describes the neural circuit of the cockroach as a decentralization of control processes. The brain ganglia are the main processing unit, connected to other ganglia clusters in the thorax and abdomen. Each of these clusters can act without any input from the brain.

This decentralized brain is connected by a ventral nerve cord (VNC). Each cluster is responsible for certain functions within the cockroach’s body, like breathing and walking.

Their ganglia are too complex to be called nerves. While humans also rely on nerves to transmit information, humans cannot function without their brains to interpret these signals. A roach can let its nerve bundles operate with complete autonomy. This makes it far more reasonable to call their nerve bundles a second brain.

What Is The IQ Of A Cockroach?

The exact IQ of a cockroach is unknown. What we do know is that they do possess a level of intelligence. Cockroach brains are considered primitive, as are most insect brains. Cockroaches are not capable of the same level of thought and consciousness as humans. Still, they are one of the more intelligent insects as they:

This intelligence is not on the same level as other animals. For example, they don’t begin to compare to dolphins, parrots, or chimpanzees. You won’t find a cockroach performing tricks or solving complex puzzles. However, that doesn’t mean that cockroaches are stupid.

It is theorized that the cockroach’s intelligence is closely tied to its visual processing unit and the mushroom body of its brain. With it, roaches use their smarts for more basic tasks.

Scent is vital in the day-to-day life of a cockroach. The cockroach uses chemical scents to communicate and lay trail markers. Smell ties closely into memory in cockroaches. With it, roaches can detect:

The Journal of Comparative Neurology notes that mushroom bodies manage olfactory learning and memory. The mushroom bodies process this sensory input and allow the cockroach to make decisions based on the information deduced. Cockroaches know better than to walk into obvious danger.

An example of a cockroach’s ability to learn was covered in a research study by Vanderbilt University. The scent of peppermint normally deters cockroaches. Researchers taught cockroaches to ignore their instincts and associate the scent with food.

That means roaches aren’t mindless creatures operating on scent commands. Instead, they have enough intelligence to learn from mistakes and second-guess the initial information they receive.

Researchers taught the cockroaches to ignore the scent of vanilla, which they enjoy, in favor of peppermint. This proves roaches can make judgment calls. Scientists were leading them astray, but in the wild, they would base this information on experiences. For example, the smell of peppermint might surround otherwise tasty food

Do Cockroaches Have Memory?

Cockroaches are capable of learning, which proves that they have memory storage. According to the Invertebrate Brain Platform, sensory information is captured and processed by the mushroom bodies of the brain. What the cockroach learns from its experiences is also stored here.

In experiments published in Frontiers in Physiology and Animal Behaviour, researchers found that cockroaches learn quickly in response to stimulus and conditioning. Short-term memory has been shown to influence a cockroach’s behavior. We don’t yet understand if these lessons are remembered throughout the cockroach’s entire life.

How Much Can Cockroaches Learn?

The intelligence of cockroaches allows them to learn and adapt to a degree. A study by Behavioural Ecology looked at how cockroaches responded to being infected with a temperature-sensitive parasite.

The researchers found that two species of cockroach (Supella longipalpa and Blatta orientalis) specifically would move toward colder temperatures. The parasite is known for being cold-intolerant. The cockroaches seemed to have this knowledge, too.

This proves that cockroaches are capable of assimilating new information and adjusting their behavior. In practice, that indicates some form of decision-making. The nuances of cockroach learning are still being explored. Although not on the same level as primates, cockroaches have a more nuanced brain than most realize.

Cockroaches supposedly vary in their ability to learn throughout the day, a notion seen amongst mammals. It has been proven that cockroaches learn better in the evening and worse in the morning. Lessons absorbed in the evening were also retained as memories for a longer period of time. In contrast, those learned in the morning would tend to fade.

Do Cockroaches Have Feelings?

When broken down, basic feelings or emotions are really just chemical reactions to stimuli. These chemicals trigger certain physiological changes in a being. Only creatures with a certain level of consciousness will experience complex emotions, like envy and empathy. All creatures, including cockroaches, will experience basic emotions like fear, curiosity, and hunger.

You may not be able to hurt a roach’s feelings, but you can scare it. Likewise, it may be enticed to explore a new area or kind of food because it feels like it.

A cockroach can also feel loyalty to its colony as long as the colony promotes its survival. However, you won’t find a complex system of devotion existing between roaches and their own kind. Even cockroaches kept as pets, like the Madagascar hissing roach, won’t bond with their owners.

Roaches may not be mindless creatures, but having two brains doesn’t make them particularly advanced.