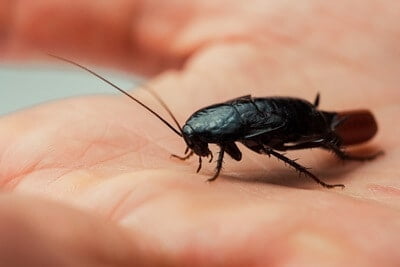 A female cockroach is pregnant if you notice a brown protrusion from the lower part of her body. This bean-like sac is an egg casing, also known as the ootheca, and usually contains about 16 to 40 eggs. Female cockroaches can lay up to 14 egg capsules or produce 400 offspring in their lifetime.

American cockroaches often have smaller egg sacs, despite being larger roaches. German cockroaches will have the largest sacs in comparison to their body, as they are carrying up to 40 eggs. They also keep their egg sac slightly inside of themselves to assist gestation. They can still fly in this state, although their coordination will deteriorate.

How to Know If A Cockroach is Pregnant

You will know a cockroach is pregnant if she’s carrying an ootheca.

Female cockroaches often begin to reproduce as soon as they reach adulthood. Since these creatures are oviparous by nature, they gestate their offspring in egg sacs (outside their bodies), known as ootheca.

A female cockroach will produce one egg capsule at a time but can tally more than 10 of these during its lifetime. You will be able to tell whether a cockroach is pregnant if it has a pill-shaped protrusion sticking out of its rear end like a fat tail. Usually, this protrusion extends inside the female cockroach’s body as more eggs develop inside her.

According to the Biological Bulletin, a pregnant roach carries the egg case until the eggs are ready to hatch. This usually happens after a month.

Once the eggs are ready to hatch, the cockroach may continue carrying them or finding a safe location to deposit them. Provided the location stays moist and undisturbed, the eggs will hatch within a day or two, and tiny cockroach nymphs will emerge.

As the baby cockroaches start to grow, they require more room to breathe. To achieve this, they will molt, which involves inhaling too much air until the exoskeleton breaks.

The nymph then breaks out of its old exoskeleton and grows a larger one, which can accommodate its breath capacity. After the nymphs shed off their old exoskeleton, their bodies will take on a whitish appearance until their new shell forms.

As mentioned, cockroaches are oviparous, which means they don’t give birth to offspring. Instead, they carry their young ones in eggs contained inside capsules known as an ootheca.

When a female cockroach is pregnant, it will have a brown or black pill-shaped protrusion emerging from the rear end of their bodies. This is the egg sac containing the eggs that will soon hatch into nymphs.

A pregnant female cockroach will typically carry the egg-sac for up to a month before finding a secure and moist location to deposit it. According to North Carolina State University, cockroaches exhibit remarkable parental care qualities that are more evolved than other insects.

Not only do some species of cockroaches incubate their eggs inside their bodies (for protection throughout the gestation period), but they will go to great lengths to care for their eggs even after laying them.

For instance, they may construct a nest for their offspring to grow in and even carry their hatched nymphs on their backs and underside of their bodies.

Both the American and German species of cockroaches have similar gestation behaviors and processes. However, you may observe unique physical and behavioral traits, depending on what species the cockroach belongs to.

American cockroaches carry their eggs in an ootheca. The pregnant female usually develops the ootheca within a week of mating. On average, females will produce one ootheca every month for up to 10 months, with each case housing as many as 16 eggs.

The pregnant female will carry the ootheca capsule for a few days before depositing it in a safe location for hatching.

Pregnant German cockroaches will carry their eggs in an ootheca. However, they have much larger capsules that contain up to 40 eggs.

Females will carry the ootheca inside their bodies until they are ready to hatch. To ensure the safety of her eggs, the pregnant female will find a place to hide before depositing the ootheca.

A pregnant cockroach can fly, although she will struggle and will likely not fly very far. Cockroaches are not particularly skilled at flight in the first place.

So, having a sizable egg sac attached to a pregnant female would only further weigh her down and make it difficult to aim the flight. At most, she would only be able to glide over short distances.

What Does It Mean to Find a Pregnant Cockroach?

Stumbling upon a pregnant cockroach is never a good sign. Usually, it means you have a cockroach infestation waiting to happen if it hasn’t already.

Remember, common cockroach species such as the German cockroach can lay up to 40 eggs. Assuming half of those are male, and the other half are female, that means you’ll have 20 mature females in just over a month.

Each of these is capable of producing more than 40 new cockroaches. If this pattern continues, you could have well over 16,000 cockroaches in your home in just 4 months.

The rate of reproduction certainly depends on the species of cockroach, as well as environmental factors such as the availability of food and water. Nevertheless, it is not hard to imagine one female cockroach giving rise to a large cockroach population in as little as six months.

As the cockroach population starts to multiply exponentially, you are likely to find more cockroach droppings spread out. Cockroaches like to stay out of sight and will tend to hide in remote areas around the home.

However, as the population grows, there will be fewer areas for them to hide. As a result, more of them will be forced out in the open, hence more obvious droppings.

Similarly, you will find more roaches, dead or alive, all over your home. If you do not do anything to get rid of this situation, sooner or later, you will start finding dozens of roaches regularly.

You may also encounter cockroach egg sacs littered behind furniture and other hidden locations in your home.

How Long Is A Cockroach Pregnant?