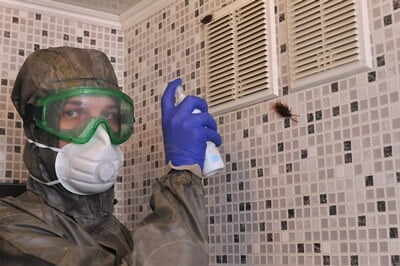 When you kill a pregnant cockroach, the eggs will die with it. Despite the popular myth, the eggs will not spontaneously hatch, nor will they have a better chance of surviving.

There are times when a few nymphs will survive, but this is rare. It also depends on how you killed the mother cockroach. If she dies from on-contact pesticide sprays, the eggs may survive and carry on, as long as they’re not disposed of. If you crush the eggs, they will be squished alongside the mother.

Table of Contents show
1 Should You Kill A Pregnant Roach?
2 Do Cockroaches Lay Eggs When Killed?
2.1 Eggs Were Crushed
2.2 No Safe Hatching Spot
2.3 Not Ready To Hatch
2.4 Disposal Can Kill The Eggs
3 Cockroach Giving Birth While Dying
3.1 Mother Roach Delayed
3.2 Poison Let The Eggs Sit
4 How To Kill A Pregnant Cockroach Safely
4.1 Related Articles:

Should You Kill A Pregnant Roach?

You can kill a pregnant cockroach without any consequences. It’s no different from killing a normal cockroach.

According to the Journal of Insect Physiology, pregnant cockroaches have additional hormones. However, these are directed to forming the egg sac and drive the instincts for locating a safe place for the eggs.

The hormones don’t make the pregnant cockroach more aggressive, stronger, or faster. Likewise, no hormone can cause the eggs to develop faster and hatch, let alone run for their lives.

In fact, it’s recommended that you kill pregnant cockroaches immediately. If you allow the mother to place her egg sac in a secret place to hatch, you may have up to 50 new cockroaches. Crushing, poisoning, or containing the pregnant mother can now help you prevent an infestation from worsening.

Do Cockroaches Lay Eggs When Killed?

Cockroaches don’t automatically lay eggs when they’re killed. Despite that, it’s easy to imagine that crushing a cockroach may lead to it vengefully unleashing its young to carry on after its death.

The good news is that’s not a skill cockroaches have. They have never evolved to lay eggs immediately upon death. When you crush a pregnant cockroach, its eggs almost always die with it. That’s because the:

The force it takes to properly crush a cockroach will also smash its egg sac alongside it. According to the National Academy of Sciences, cockroaches have an exoskeleton that can survive forces over 300 times their body weight.

When compressed, a roach can endure up to 900 times its body weight in force before experiencing an injury. That’s because cockroaches have a thick exoskeleton that’s designed to resist damage and redirect impact.

With that in mind, it’s not uncommon for 2-3 swats to be needed before you’ve properly crushed a cockroach. Oothecas (the scientific name for their egg sacs) are slightly less durable than cockroaches themselves.

According to Biological Sciences, the ootheca is covered in several calcium oxalate crystals. These work to harden the sac and make it resilient against damage. Likewise, Life And Environment stated that some of the base components in the roach exoskeleton (namely insect cuticles) are also found in the ootheca itself.

However, a strong attack with a shoe will likely damage the eggs before it harms the cockroach itself. The offspring will then be killed and unable to hatch, regardless of what happens to their mother. The ootheca is strong, but it’s not invincible. What can kill an adult will kill a younger cockroach.

Let’s assume that you don’t smash the cockroach, but the mother perishes and the eggs manage to survive. Perhaps the mother was poisoned by bait, dehydrating and dying without her eggs being affected. In this case, the eggs are still likely to die.

That’s because cockroaches take great care to place their eggs in safe locales. This is designed to shield them from adverse weather, keep them away from predators, and protect them from disturbances. If the mother dies before she can place the ootheca in a safe place, the eggs will be vulnerable.

Other bugs, pets, or even yourself may find and destroy the eggs. If the baby cockroaches aren’t near shelter, warmth, and food or water when they hatch, they’ll also have a more difficult time surviving.

Not Ready To Hatch

No matter how you kill a mother cockroach, her eggs will not suddenly hatch in response. This is because cockroach eggs hatch in their own time, not before.

You cannot speed up the hatching process or encourage the offspring to emerge earlier than normal. They are either ready or not ready. Smashing their mother before they are ready will mean they are left vulnerable to predators as they develop.

Likewise, the mother cockroaches do not carry eggs that are about to hatch. Instead, she merely carries them on her for a few weeks until they’re mostly developed.

She will then place the egg sac in a secure locale to finish development and hatch later on. If you squish a cockroach that’s carrying eggs, rest assured, they’re not ready to hatch if they’re still on their mother.

Disposal Can Kill The Eggs

Let’s assume the worst and say that the eggs have survived your attack on their mother. They’re ready to hatch soon, and there are no dangers around them – except for you.

They’re still unlikely to hatch if you take the right precautions in disposing of the cockroach and its ootheca. That process alone may put an end to the eggs or at least ensure they’re no longer a threat to your home.

Most people don’t leave dead cockroaches lying around their homes, so this should come naturally. Flushing a dead roach down the toilet, putting it in your garbage can, and securely taking that bag to the street for disposal or disposing of the body in another way are all good options. The ootheca will then perish from drowning or be left to live and die in a landfill, not in your home.

The idea that pregnant roaches lay their eggs when killed is a myth. It’s been around for decades. It likely developed because of a misunderstanding about how the cockroach’s egg sac (or ootheca) operates. The eggs within the ootheca are not fully developed and ready to burst out at a moment’s notice.

Instead, the cockroach nymphs (babies) are contained in long, cylindrical eggs inside the protective shell of the egg sac. They will stay there until the mother attaches their ootheca to a secure place, like underneath your fridge or wardrobe. Here, they will develop for another few days and then hatch.

With that said, it’s not 100% impossible for a roach to “give birth” while dying. If you kill a roach and see other small ones scurry away from its body, you’ve witnessed a rare sight. With that said, there are exceptional times when your attempts to kill a roach and its egg sac will fail. It’s possible that this happened because:

If you smash the roach and the babies run free, it’s possible the mother was delayed from placing the egg sac in a safe place. The eggs may be developed and about to hatch, and by cracking open the ootheca, you let out the few early bloomers.

However, you’ll likely find a smattering of white paste also coming from the ootheca. This is composed of the other cockroach nymphs and eggs that have not hatched or did not survive the attack. However, this is almost unheard of since the mother would flee to safer places if she found the current spots too dangerous to lay her eggs on time.

If you use on-contact poison sprays, the ootheca may survive while the pregnant mother dies. According to the Journal of Economic Entomology, cockroach egg sacs are resilient against poison. This is why many pest control measures rely on a second wave to take out the offspring after they’ve hatched.

If this happens, the eggs may develop on the mother’s corpse and hatch in their own time. If you don’t find and dispose of them immediately, this could lead to a new wave of offspring anyhow.

Nonetheless, the baby roaches are still likely to die in their egg sac. They will not be ready to hatch immediately, disposing of the roach body will often be the end of the eggs.

Without a safe place to hatch, they’ll likely die anyhow. So, even if your first attempt doesn’t kill the eggs, the following ones or the circumstances alone may do the job.

How To Kill A Pregnant Cockroach Safely

If you find a pregnant cockroach, you’ll need to dispose of her as quickly as you can. The best methods include:

You should avoid baits, as these often rely on the female dying over a long period of time, which gives her time to lay her eggs somewhere. On-contact sprays will work fine, so long as you don’t lose sight of the cockroach and you properly dispose of the unscathed eggs afterward.

If you smash the roach, the eggs will not survive, and there are no severe consequences. As long as you clean up the mess, you might’ve even saved yourself from an infestation.