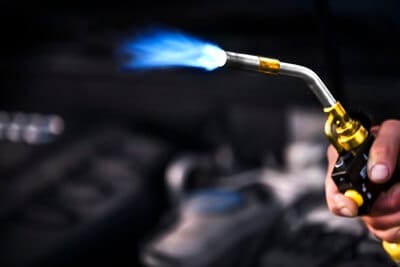 Cockroaches are hardy pests that are capable of surviving in extreme environments. While insecticides are commonly used to control cockroaches, many species have developed resistance to these agents. Fire, though, can’t be adapted to. This begs the question as to whether fire can be used to kill cockroaches.

You’d need to burn a cockroach to a crisp or it might survive the burns, molting to heal itself. Roaches have a tough exoskeleton that protects their soft inner parts from even the most severe injuries. A cockroach will usually die if exposed to an open flame for several seconds but could live if it escapes before its outer shell cracks.

Cockroaches will die when the temperature exceeds 140-150 degrees for several hours. Even an average lighter can reach over 4,000 degrees, making open flames a huge danger to cockroaches. However, using fire as a pest-control method is discouraged as there’s a high risk of damaging your home.

Cockroaches can survive a fire. This depends on:

If you were to drop a cockroach in an open fire and it could not escape, it would die. However, If the cockroach can crawl out or isn’t exposed to the hottest part of the fire, it may survive. That’s because cockroaches are highly resilient, known to survive extreme natural disasters, including droughts, floods, and house fires.

The secret to roaches’ survivability is their hard yet flexible exoskeleton. This serves as armor to protect their fragile bodies from traumatic events, such as getting:

According to the National Academy of Sciences, cockroaches can withstand forces of up to 900 times their body weight due to their exoskeleton.

This thick layer around them creates a durable barrier that can repel temporary heat, such as brushing against fire. However, the shell is not entirely fireproof. The longer the cockroach is exposed, the more damage will be done.

Even if a cockroach survives its encounter with fire, it may still die later on. The cockroach’s body may experience injuries that it cannot recover from. It may not die immediately, but it can succumb to the damage or be unable to eat due to its wounds. When this happens, the cockroach will then die of starvation or dehydration.

Can You Burn Cockroaches?

You can burn cockroaches by setting them on fire. However, you would need to burn them to a crisp in order to kill them. As mentioned, cockroaches are capable of surviving injuries from fire due to their exoskeleton.

Exposing a cockroach to flames inconsistently or for a short amount of time may leave minor injuries. The cockroach can then recover from this during its next molt and be good as new. The only way to use fire as an extermination method is to keep burning the cockroach until there’s virtually nothing left.

Is It Bad to Burn Cockroaches?

Burning cockroaches is a cruel pest control method. Furthermore, it isn’t effective since there is a high chance the cockroach will survive if not burnt fully.

Even if you doggedly use flames against a cockroach, you’re putting yourself and your home at greater risk. Cockroaches are fast runners and quick to scurry away. You may lose them, leaving them to heal in privacy or have a flaming roach pose a hazard to your house. Fire damage may be costly if not life-threatening.

The best way to get rid of cockroaches is to make your home unappealing to them. This includes keeping your home clean and getting rid of potential food sources, such as kitchen trash. Keeping your home moisture-free and fixing leaking water pipes can also discourage cockroaches from nesting in your home.

What Happens If You Burn a Cockroach?

When a cockroach is set on fire, it produces a hissing sound. Contrary to what many people believe, this sound is not produced by the cockroach’s mouth. After all, they don’t have vocal cords. Instead, the sound you hear is likely the result of air escaping the body through spiracles in its abdomen.

According to the Journal of Experimental Biology, spiracles aid in gaseous exchange. It’s a silent process when the roach is in good health and within normal temperatures. However, if the cockroach is charred and its organs become super-heated, the gas will escape involuntarily and quickly. This produces the hiss.

Cockroaches start to die when exposed to temperatures above 120 degrees Fahrenheit. While their hard exoskeleton is resistant to heat, it can become charred and damaged at high temperatures. This can lead to organ damage, a cracked exoskeleton, and lost limbs.

That’s not to mention the dehydration the cockroach will experience. In truth, this is often what kills it. Cockroaches can heal from many injuries, but they can only survive as long as 1 week without water. If the burn damage is too severe and they cannot move, they won’t survive long enough to heal.

Cockroaches aren’t fireproof, although their bodies are more resistant to heat than humans. They can withstand temperatures of up to 110 degrees Fahrenheit. However, when exposed to higher temperatures, the cockroach will die from dehydration and organ failure as its body disintegrates.

120 degrees is the cut-off point for a cockroach. Beyond that point, it will experience deadly effects. That shouldn’t be a difficult temperature for you to reach with the average fire.

A normal butane lighter reaches about 4,074 degrees Fahrenheit. This may change based on the surrounding temperatures of the room and airflow. However, it proves that cockroaches can’t play with fire and live.

Are Cockroaches Immune to Fire?

Cockroaches cannot survive more than the briefest encounter with an open flame.

In fact, heat alone can damage a cockroach, flames or not. Some pest control services use heating equipment to raise a home’s temperature to 140-150 degrees Fahrenheit for 5 to 6 hours. This not only kills any adult roaches in the vicinity but will also destroy any nymphs and eggs.

However, considering the danger of using an open flame in a home, fire is strongly discouraged.

Do Cockroaches Die In a Fire?

Cockroaches will die if left in a fire. For example, if you throw a cockroach in your fireplace and it cannot escape, it will eventually become charred and disfigured. This can kill it outright.

It may take no longer than a few seconds. However, cockroaches are dexterous creatures and will want to avoid fire at all costs. It will be hard to properly contain a cockroach in an open flame.

Cockroaches will avoid fire if they can. The light that the fire produces also makes it harder for the cockroach to hide. They’re instinctively aware that extreme heat can cause severe burns and organ failure.