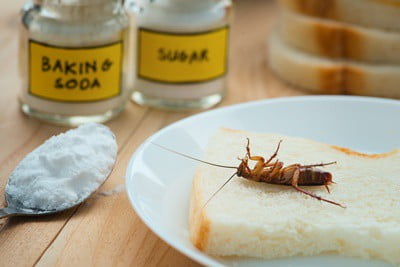 This cooking ingredient is often touted as an effective, at-home roach killer. However, since roaches are skilled at adapting to even professional-level insecticides, it sounds a little suspect.

Baking soda does kill roaches. However, the cockroaches must eat the baking soda so that it can expand in their guts. This will cause severe pressure once they drink water. Since their exoskeleton will be unable to expand, this can kill them. Roaches dislike the flavor and smell of baking soda, so add sugar to attract them.

Baking soda and vinegar are ineffective, despite what internet rumors suggest. The vinegar will activate the baking soda too soon, and the smell will deter roaches. You can also use baking powder. Just keep in mind that a full colony won’t be severely dented with this method, so you’ll need stronger and faster-acting poisons.

Roaches don’t eat baking soda because they find the taste and smell unpleasant. Whether that’s due to preference or survival instinct is open to debate. Regardless, baking soda is toxic to cockroaches because it’s harmful to their internal organs and exoskeleton when ingested.

That’s only true when the baking soda is still fresh, straight, and in powdered form. So, if you mix it into your food, it does not make that food off-limits to roaches.

Also known as sodium bicarbonate, baking soda is a white powder made up of two different chemicals: sodium cation and bicarbonate anion. In other words, that’s salt and an early form of carbonic acid. In nature, this plays a valuable role as a pH neutralizer. When mixed with other ingredients and cooked, it expands whatever it’s in by creating gas.

Although roaches will occasionally eat foods that aren’t nutritious or edible to them, they steer clear of baking soda. If you want to use this home ingredient as a poison, you’ll need to mix it with other tempting foods. Roaches won’t be lured into eating baking soda straight.

Baking powder is a blend of baking soda and a dry acid. This acid may come from cornstarch or cream of tartar. Unfortunately, the acid doesn’t make it any more deadly to the roaches. Likewise, it doesn’t draw them in.

The baking soda in the powder is doing all the work. However, you’ll need to mix another ingredient with baking powder to encourage roaches to take the bait. Keep in mind that baking powder isn’t as effective as using boric acid. The reaction is slower, and both versions of sodium bicarbonate are unappealing to roaches. Here’s why:

Baking soda as a roach-killer is best used for small roach problems.

Why Does Baking Soda Kill Roaches?

Roaches die after consuming baking soda because it causes them to explode. While it may not be a gory explosion, it will still crush their internal organs and crack their exoskeleton. Let’s explore why:

As mentioned, baking soda will expand when it touches water or most other liquids. This happens because sodium bicarbonate will respond to water by creating a carbonic acid reaction.

This happens in an instant and then quickly snowballs into an exothermic heat reaction. In other words, it turns into a gas at a rapid pace so quickly that it even generates some heat.

Cockroaches Are Trapped By Their Own Exoskeletons

If cockroaches eat baking soda, this reaction happens within their body, which is encased in an exoskeleton. Roaches don’t have a skeleton surrounded by flesh and tissue. So, they cannot expand and stretch when they need to.

All of their organs are kept within this outer shell. The exoskeleton makes cockroaches very durable against outside damage. Damage from within means that there’s no means of escape.

Roaches Have Their Organs Crushed And Their Shell Cracked

A roach may not be able to survive for more than a few hours. Even if the baking soda only partly damages the cockroach, it may be unable to move. Damage to its organs and nervous system will mean losing its balance, toppling over onto its back. Here it will stay until it starves, is killed by a microorganism, or is eaten by a predator.

Baking soda and sugar will kill roaches. That’s because sugar:

Sugar allows you to draw in the roaches and hide the white poison lurking beneath. According to the Texas Agricultural Experiment Station, trapping is one of the most effective cockroach-killing methods. If the poison is matched to a food item as a lure, roaches in the area may die within 10 days.

You can use sugar to mask the unpleasant smell of baking soda. If the sugar is mixed in thoroughly, roaches will be unable to tell the two scents apart. Here’s how to create a DIY insecticide with sugar and baking soda:

You can place the traps:

Vinegar and baking soda can kill roaches. However, it’s not an effective pesticide because vinegar:

These will defeat the purpose of using vinegar and baking soda as an insecticide. If you mix the two, the liquid nature of vinegar will cause the baking soda to expand in the bowl. Even if the roach was tempted to find the mix later and eat it, the expansion wouldn’t be severe enough to kill it.

Onion and baking soda can work as an insecticide. You’ll need to:

The onion will serve as bait, with a strong and alluring aroma for cockroaches. Once they start to chew through the thick, fibrous chunks, they’ll end up consuming the baking soda that coats them. According to the United States Patent Office, raw yellow onions are among the best types of food bait for roaches because:

This increases the chances of your roaches taking the bait. Just be sure to pat the onions down with a paper towel if they’re too moist. You don’t want the baking soda to activate until it’s in the stomach of the roach.

According to the International Journal of Advanced Research, baking soda kills cockroaches within 12-24 hours. The average is about 15 hours. This depends on:

The baking soda can only activate and become deadly with water. So, if the roach is dehydrated or hasn’t recently drank water, there will be a delay. Even if the baking soda activates right away, the roach may not immediately die.

Even with a cracked exoskeleton, the roach may not be dead. It may live for several hours or days until it eventually starves or is killed by something else. Baking soda works to immobilize the cockroach, so it can’t fend for itself. If you come across a paralyzed roach, you can dispose of it all the same.

Baking soda can kill roaches. It’s not as effective as pesticide spray or bait traps because there are no guaranteed results. Roaches may avoid eating it as they dislike the smell and taste. So, it needs to be combined with food with a low water content that cockroaches like eating, such as sugar.