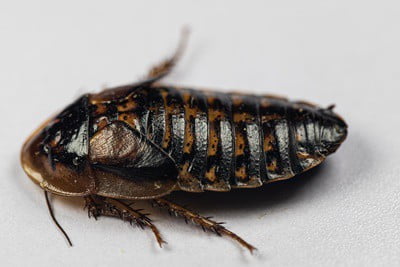 While there are over 4,500 species of cockroaches, many resemble each other. So, it can be concerning when you find a ‘roach’ indoors. However, Pennsylvania wood roaches are much less troublesome than cockroaches.

Wood roaches require high levels of humidity, so human homes aren’t suitable for them. They only breed from May to June, so they’re unlikely to form an indoor colony.

What’s the Difference Between Cockroaches and Wood Roaches?

To the untrained eye, all cockroaches look the same. They’re small, dark in color, and scurry around near food during the night. However, there are thousands of species of cockroaches, each with different motivations.

Although the Pennsylvania wood roach (Parcoblotta Spp.) looks similar to the cockroach, there are differences:

If wood roaches find their way into your home, they’ll react differently to cockroaches. Here’s how:

Wood roaches are one of the least threatening varieties.

Are Wood Roaches the Same as Cockroaches?

Wood roaches are not the same as the cockroaches we see as household pests. Of course, Pennsylvania wood roaches belong to the same order (Blattodea). However, they diverge when it comes to families.

The species of cockroaches that infest most homes come from Blattidae, which includes:

Wood roaches come from the family Ectobiidae. There are seven different families of cockroaches. Despite having the same basic design, ‘roaches’ evolved in various ways.

Some adapted to thrive in adverse climates, able to live anywhere and eat anything. Blattidae cockroaches target human homes as a way to find ample food, water, and shelter.

Other species, such as those from Ectobiidae, avoid humans. They thrive in specific areas/environments and make their home in the wild. Wood roaches prefer to remain outdoors, live in wood, and eat decaying plant matter.

According to Natural Sciences, even a wood roach’s genomes are smaller than the average cockroach. Since they’ve been put under less selective pressure, they didn’t evolve to be as adaptive. This may be why cockroaches are so widespread. In contrast, Pennsylvania wood roaches remain isolated in their preferred habitats.

Let’s look at some of the differences between cockroaches and wood roaches:

Both wood roaches and cockroaches have a similar appearance. They’re oval-shaped, flat, and tan or brownish. However, upon closer inspection, you can tell them apart.

Wood roaches are slightly smaller than cockroaches, at about 0.75 to 1.25 inches in length.

Wood roaches are commonly found in the wild, not the home. They live in rotting wood or uprooted and dying trees.

They need high humidity levels to live and struggle to adapt to the drier spaces in human dwellings. Typically, once they’ve found their way inside, they die off within a couple of days.

A cockroach is the ideal home invader. It’ll be attracted to the even temperatures, trace moisture, and ample food supply we offer.

No matter how immaculate a home is kept, there’s always a chance that cockroaches will take up residence. Even the humidity found in bathrooms and near kitchen sinks is enough to sustain them.

Wood roaches are unlikely to breed once they get indoors. Since they end up in homes by mistake, they won’t choose it as the optimal mating spot.

Instead, they prefer wood piles or loose tree bark to make their breeding grounds. If you don’t have anything similar within range of your home, there’s no need to worry about a wave of nymphs.

Wood roaches have set mating seasons, while most household varieties mate whenever they can. Wood roaches choose a period between May and June to lay eggs.

During this time, a female will lay up to 32 eggs, which hatch within 30-34 days. This may be partly credited to their smaller number of chromosomes when matched against normal cockroaches.

Normal cockroaches don’t like to mate in cold weather, but a normal home will circumvent this issue. Indoor heating will provide a year-round breeding season for the average cockroach.

The average cockroach only navigates under the cover of darkness. It will not be harmed by light, but it understands that it’s difficult to hide in broad daylight.

Pennsylvania wood roaches are attracted to light. In the same way that moths rush toward a flame, a wood roach may be lured toward your porch light, night lights, or indoor lamps.

All cockroaches will flee if a light is suddenly flicked on. They’ll be startled by the abrupt change and can tell that danger is nearby. However, cockroaches will avoid going near light if there are other options available.

They prefer to stay in the dark and move around when no one is present. In contrast, you might find wood roaches meandering closer to your light if they don’t sense movement or predators.

Wood roaches feed on decaying matter, such as the kind found in trees and leaf debris, while cockroaches eat any food or food waste that they can find.

To enable them to process these nutrients, wood roaches have as many as 18 strands of yeast in their gut. These include xylose-assimilating yeasts and ascomycete yeasts.

They work to ferment the plant matter and break it down to glean the most nutrients. While cockroaches also have complex gut bacteria, it’s less yeast-heavy.

If necessary, wood roaches will consume dead animals that are found near the wood they’ve claimed as their home. However, by nature, they’re not attracted to meat.

Likewise, they show little interest in the food you keep indoors. They may sample leftovers if they’re easy to reach, but it will be the last resort. Instead, they’ll seek out any house plants or firewood they can locate.

In contrast, cockroaches are keen to access the food found in human homes. The sugary, starchy, and fatty foods are ideal. They quickly breed and expand their colonies and survive for up to 4 weeks without food.

Most insecticides have been developed with cockroaches in mind.

Because of this, wood roaches are resilient against your average pesticide. It’s not customized or targeted to their unique biology. While insecticides do kill wood roaches, they’re not as fast-acting or efficient.

The best way to remove wood roaches is to deter them. Since they have no desire to be inside your home, they’ll readily take an exit route if given the chance.

It’s almost impossible to drive cockroaches from your home. Instead, limiting their access to food and water will drive them to cannibalism. They’ll also be more willing to eat your poisoned baits and traps.

Wood roaches and cockroaches may appear identical at first glance. However, at their core, they’re very different creatures with different habits and behaviors.

You don’t need to fear wood roaches any more than you would leaf bugs or praying mantises. They prefer the outdoors and will readily return to the wild if they’ve wandered into your home by accident. Cockroaches target the home for their even temperatures, food, and water. They will resist leaving.

If you find wood roaches in your home, they’re significantly easier to remove.