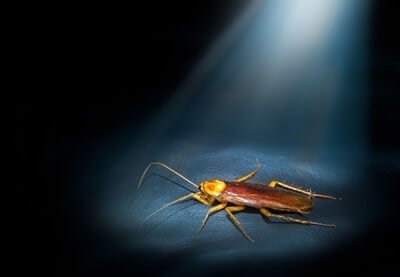 While it’s true that cockroaches are far more active at night, this isn’t due to a biological revulsion to the day. In fact, roaches can function perfectly well in the light and may resort to wandering around during the daytime. Given a choice, roaches prefer the night because of their internal clock and hardwired survival instincts.

Cockroaches are active at night because they’re nocturnal insects that feel energized outside of daylight hours. Nighttime means there’s less activity from humans and animals, so roaches can eat and procreate without disturbance. Due to their enhanced night vision, it makes sense for roaches to explore in the dark.

Roaches navigate well in the dark with their sensitive eye cells, which are capable of retaining light and improving their vision. This is paired with their antennae that work as a secondary mode of vision. Cockroaches will never choose to come out during the day. If they do, it indicates that you have a large cockroach population.

Why Are Cockroaches Nocturnal?

Cockroaches are nocturnal because of their circadian rhythm. All creatures have this specific sleep-wake cycle. It dictates when an animal should feel most energetic or sluggish.

Humans tend to be more active during the daytime. The sun provides light and energy for us to carry out our daily activities. When it gets dark outside, our bodies naturally produce hormones that cause us to feel sleepy. Cockroaches, on the other hand, are the complete opposite.

Most cockroach species favor darkness overexposure to light because they have specific adaptations that make living the nightlife much easier. We can examine research from the Department of Entomology at the National Taiwan University for a more physiological outlook.

Here, it was found that the Pigment Dispersing Factor (PDF) is significant in regulating nightly activity levels in cockroaches. PDF is a type of neuropeptide. This chemical in the brain serves as a sort of output signal. It controls a roach’s locomotive behavior based on its circadian rhythms.

In the study, cockroaches were genetically modified to lack PDF. As a result, they behaved atypically and were no longer strictly active during the night. This tells us that roaches are biologically predisposed to be nocturnal creatures.

So, roaches are nocturnal, but what does this mean for their sleep pattern? Can these cockroaches take a nap? It’s difficult to determine whether or not a cockroach is asleep, especially when comparing it to human sleep patterns. However, research has determined that cockroaches shift between three activity states:

According to the National Library of Medicine, cockroach locomotion (or movement) was low during the normal 12-hour light period. This can be considered day. Then, the movement was higher in the typical 12-hour dark period (or night). That was especially true in the middle of the night. The immobility state was mainly observed:

These results indicate that the cockroach’s immobile state corresponds to what we think of as a sleep state. So, cockroaches do sleep, but they don’t do it in the same way as humans. Sleeping for cockroaches is just a state of immobility or lack of movement and activity. They don’t fall asleep or dream – they just rest.

Cockroaches do prefer darkness because they thrive much better in it. Roaches can feed, reproduce, and gather safely under the cover of darkness. That’s because nighttime has many advantages:

Roaches are prey animals and easily startled. Nighttime ensures that any loud sounds they hear can be more accurately identified as a danger.

Without the heat of the day beating down on them, cockroaches can navigate for food and procreate more easily.

Cockroaches are small insects, and many of their predators are large. This makes them an enticing snack for predators. Some examples of cockroach predators include:

Most of their predators are also day-fairing creatures, so exploring at night keeps roaches safe.

While procreation isn’t a complicated process for roaches, it’s not an activity where they want to be disturbed. Cockroaches desire a safe and secure location to mate and lay their eggs.

The cover of darkness will keep the environment quiet and relatively free of predators. This makes it far easier to locate mates, fertilize eggs, and safely plant them. They won’t be forced to put all their attention on staying alive.

According to the Journal of Insect Physiology, the American cockroach’s feeding rhythm seems to match with their circadian rhythm. With that in mind, cockroaches may have evolved to be more active at night for these reasons:

Why Are Cockroaches Afraid of Light?

We’ve all heard the saying, “They scatter like roaches when you turn on a light.” This has led to the popular myth that roaches are terrified of light. Rumors even speculate that cockroaches are physically harmed by exposure to light.

Cockroaches do scatter when you flip on the lights, but it’s not because of physical damage. Direct exposure to sunlight or artificial light will not harm roaches any more than it harms you. In truth, roaches scatter because:

As such, fleeing is the best option for a cockroach. However, the roach is not fleeing from the light itself. It’s running from what comes next:

Does Light Keep Cockroaches Away?

With all that said, you may wonder if light can be used as a great roach-deterrent. Couldn’t you just leave the kitchen lights on and ward off the pests? Perhaps.

Roaches Will Be Upset By Constant Light

A study in the Journal of Experimental Biology suggests that having lights on may interfere with a cockroach’s circadian rhythm. Researchers placed several artificial light sources near cockroaches, with each of them set at different intensities. It was shown that, even at extremely low intensities, cockroaches were far less likely to emerge from hiding. That’s compared to when the lights were entirely off.

Researchers also used artificial light during the usual dark period, where cockroach activity would be high. Here, the cockroach’s rest and activity cycle seemed to be dramatically affected.

Even when the artificial lights were not on the next day, at the typical 12-hour dark period, cockroaches were not observed to appear from their hiding spaces. This indicates that the appearance of artificial light threw off the circadian rhythm of the roaches.

The study may seem promising for DIY pest management, but know this:

Leaving your kitchen light on may deter the cockroaches at first. However, a few may overcome their fear of light immediately, while others will need time to warm up to the idea. Once they have, your cockroaches will adjust to the new feeding schedule and harass you during the day.

Aside from that, this form of pest control may not be worth the jump in your electricity bill. Instead, it’s better to set those funds aside for:

How Do Cockroaches See In Darkness?

Originally, it was unknown if roaches had night vision. Researchers concluded that roaches relied on smell and touch to find their way around. However, a study in The Journal of Experimental Biology has begun to change that idea.

Here, it was discovered that cockroaches could gather a myriad of visual signals using thousands of light-sensitive cells in their eyes.

The study revealed that these insects respond to movement in severely dim light—magnitudes dimmer than human eyes can detect. In fact, roaches can even navigate conditions similar to a moonless night outdoors. The enhanced ability of these cells (photoreceptors) is what allows roaches to see so well in the darkness.

This discovery doesn’t just mean that roaches are harder to deal with. It can prove helpful for our own technological advancements. By better understanding roach vision, we can improve our own night vision devices.

Additionally, roaches have eyes that wrap around their head. This enables them to see from behind without turning or angling themselves. This keeps predators or other animals from sneaking up on them. More importantly, it enhances their ability to see in the dark. Since roaches can take in more light, they can see more clearly.

Cockroaches are also capable of seeing in the dark via their antennae. Cockroach antennae have tiny hairs on them. These are sensitive to the slightest vibration in the air around them. As a result, they can detect movement within their vicinity. The roach will flee if it deems this movement to be a threat.

The antennae are also sensitive to scent chemicals in the air. In a way, they work as the roaches’ nostrils. This allows cockroaches to detect any threats by smell, as well as by sight.

Antennae serve as a secondary pair of eyes, taking in different signals. This further helps roaches to visualize what is around them.

Do Cockroaches Come Out During the Day?

While cockroaches are nocturnal insects, that doesn’t mean they come out exclusively at night. If circumstances force them out during the day, then cockroaches will easily adapt. Motivating factors include:

Driven Out Due to Hunger

Roaches are notoriously difficult to eradicate. That’s partly because they can survive long stretches of time without food. Since roaches are cold-blooded, they do not require as much food to retain their internal temperatures.

According to Evolution News and Science Today, warm-blooded creatures have a high internal temperature that must be maintained. This is done by metabolizing large amounts of food into heat. Cold-blooded animals and insects do not need to retain core temperatures in this way. Therefore, roaches can survive longer without starving.

However, if your extermination methods have eradicated a roach’s food, it will eventually become desperate. When it fails to find quality foraging opportunities at night, it will keep looking. This may stretch into the daylight hours.

Driven Out Due to Overcrowding

Cockroaches can multiply at a fast rate. They breed continually, meaning that their mating and breeding cycles are not confined to a specific season. Additionally, female roaches can produce up to 400 eggs in their lifetime. The nymphs that hatch from these eggs can mature into adults in as little as a month. That further hastens the reproductive rate and thus, increases the colony’s population.

When this happens, each roach may have limited space and food. Due to the shortage, the colony may resort to cannibalism. That poses a danger to smaller cockroaches. They will flee the colony and seek out safer havens – even during the daytime. If they cannot find a good hiding place, they may stay exposed, no matter the time.

If you find cockroaches in the daytime, it indicates that you may have a serious infestation. These pests are evolutionarily designed to be active at night. However, their primary trait is adaptability. If they need to, roaches will thrive at night but do their best to survive during the day.