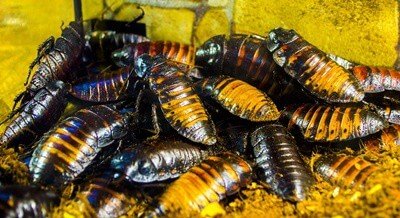 The Madagascar hissing cockroach can produce an angry, cat-like hiss that can startle anyone who hears it. Since it’s the only roach species that produces this sound, you may wonder how it happens.

Madagascar hissing cockroaches hiss by expelling air from specialized breathing passages called abdominal spiracles. They can open and close their spiracles at the same time. These roaches are also unique in that they have thoracic spiracles, giving them more control over how they push out air, which is what produces the hissing sound.

While baby roaches are unable to hiss, males and female adults can. They will hiss whenever they encounter threats to their colonies or when a male is courting a female. They also hiss to establish dominance or when disturbed. You can elicit a hiss when you pick them up, prod them, or expose them to sudden noise or light conditions.

The Science Behind Hissing Cockroach Sounds

Madagascar hissing cockroaches create their signature noise through their spiracles. These serve as a cockroach’s unique replacement for lungs. They are slots peppered up and down the body. The spiracle valves extend from the roach’s respiratory tract. They then open at the surface of the body.

By opening and closing, they let in air. Like a set of lungs, the spiracles allow roaches to breathe in oxygen and expel carbon dioxide. Spiracles are a common physical trait of insects of every kind. All cockroaches possess them, be they wild species or household pests. However, Madagascar Hissing Cockroach’s spiracles are different.

Contracting Air Through The Spiracles

They can open and close simultaneously. According to the Journal of Experimental Biology, the Madagascar hissing cockroach can voluntarily contract their abdominal musculature.

Air fills the thoracic cavity, or the hollow portion of its chest when these spiracles are closed. When it chooses to expel this air, all abdominal spiracles are quickly forced open. This action produces the infamous hissing sound.

The hissing roach’s respiratory system is also unique in another way. This species possesses two types of spiracles:

However, the hissing roach has no metathoracic spiracles. These are present in many other insects. In exchange, they have more abdominal spiracles, which may be linked to their ability to hiss.

In fact, hissing roaches may be the only known insect species that can generate such a sound in this manner. Other insects that produce a sound do so by vibrating or rubbing their body parts together.

How Does Hissing Benefit the Cockroach?

Hissing has several advantages for the cockroach. These include:

According to the Morgridge Institute for Research, cockroach territories are maintained and protected by a single male. If the colony is disturbed, hissing serves as a warning. They signal to the rest of the colony of danger. This gives the members of the colony time to hide from whatever may be disturbing their nests.

Additionally, it works to scare off whatever may have disrupted the colony in the first place. If a predator approaches the cockroach’s territory, the hiss elicited by a male cockroach will frighten it. This may be enough to drive the predator to leave the area, thus leaving the colony unharmed.

Male cockroaches are territorial, so there is only one male that heads a colony at a time. Fights can ensue if another unsuspecting male cockroach intrudes onto another’s territory or challenges the head.

The winner of this duel will then claim the territory for themselves. The new male head will also release a dominating hissing sound at the loser. This establishes its ownership over the territory and colony.

Hissing may sound like an aggressive noise. However, it is also used in mating rituals. Males will often include hissing in their elaborate courtship to attract female cockroaches. This ritual usually begins with performing posturing behavior. This increases its chances of catching attention from wandering females.

The more females the male can attract, the more likely it is to prolong the longevity of its nest.  These rituals continue until either the male cockroach dies or another male cockroach takes its place.

Entomology professors at Oklahoma State University stated that female and male cockroaches have these modified abdominal spiracles that allow them to hiss. However, while both can produce a hissing sound, they will do so for different reasons.

Males usually hiss due to their territorial and aggressive nature. They will also hiss to compete against other male cockroaches when vying for a mate or claiming new territory. The latter hisses are known as fighting hisses, which only male cockroaches produce.

Females will tend to hiss less often than a male cockroach. This is usually because females are not responsible for protecting the colony. Likewise, they do not have to worry about competing for partners. According to Bioscience Horizons, female Madagascar hissing cockroaches mainly hiss when disturbed by:

This allows the females to warn of danger or intimidate predators. With that said, both males and females will hiss while mating.

Madagascar hissing cockroaches are not able to hiss at birth because the abdominal spiracles have not yet developed. Cockroaches have 3 stages of their life cycle:

In the nymph stage, the cockroach will appear white, flat in shape, and lack a hardened exoskeleton. The exoskeleton is important as it’s where the abdominal spiracles will eventually form during growth.

These nymphs remain in the care of their mother for about 7 months until they have fully matured and developed an exoskeleton. The abdominal spiracles they use to hiss are also formed at this time.

The hiss of this cockroach sounds akin to that of an angry cat. It is a distinct sound that’s not easily confused. It’s also rather loud. You will definitely be able to hear it if you are close to one.

You can even replicate this sound yourself at home. If you take a straw and quickly blow through it, you will hear a slight hissing noise. The Madagascar cockroach’s hiss is more pronounced.

How To Make A Madagascar Hissing Cockroach Hiss

Hissing cockroaches, when not free in the wild, are kept as domestic pets. Owners are fond of their size, unique coloring, and their vocal nature. As such, if you own this exotic insect or spot a hissing roach in a novelty pet store, you may want to hear it hiss personally.

These cockroaches tend to hiss more when they have been disturbed. There are three humane ways that you can elicit a hiss from these insects:

Additionally, you can place a male cockroach in the same area as another male cockroach. Both cockroaches will become defensive about their space, and a fight will follow. Hissing will be heard from both sides. This continues until one dominates the other, pushing the subordinate off the territory.

Since the hissing sound is defensive or aggressive, does it mean that the roach is about to attack you? Usually, that’s not the case. Hissing cockroaches know better than to challenge larger animals or people.

Aside from that, you should only observe the hissing roach from behind glass. It should not be removed from its enclosure unless done so carefully. At this safe distance, you can listen to these cockroaches hiss.