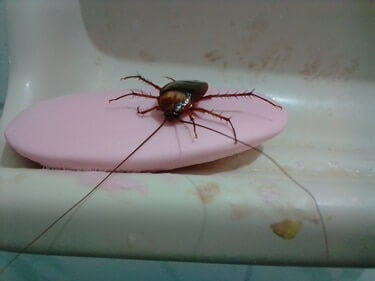 Cockroaches are notoriously difficult to kill. You may not own the proper chemicals to kill them, nor have the budget to hire an exterminator. That’s led to several urban myths about DIY home products that kill roaches. A combination of soap and water is often touted as an effective roach killer.

Soap can be used to get rid of cockroaches. A soap and water mixture can melt away roaches’ protective outer coating and block their spiracles. Unable to breathe, the roach will eventually die. However, scientific research has revealed that female German roaches are more resilient than males to being sprayed with soap and water.

The soap doesn’t kill roaches. Cockroaches eat soap as it contains fat, so it’s clearly not toxic to them. Mix the soap with water, use it in a spray bottle, and properly coat each roach with the substance. Even once this is done, be aware that it doesn’t have a 100% success rate. Other methods will be needed to remove a large infestation.

Does Soap and Water Kill Cockroaches?

For best results, you should mix the soap with water. That’s because it:

That was proven in a study published in Advances in Biological Science Research. Here, American cockroaches were exposed to 5 sprays of soapy water from a spray bottle at 32% concentration. More than 50% of the roaches were dead within 24 hours. Soapy water with higher concentrations yielded similar results.

Liquid dish soap was found to be just as effective. According to the Journal of Economic Entomology, a 3% concentration of soapy water mix left 100% of German cockroaches unresponsive in only 3 minutes.

The mortality for male and female cockroaches differs slightly from each other. According to the Journal of Economic Entomology, it was found that adult German cockroach females are the most resilient against a soapy water solution.

Additionally, the International Journal of Scientific Research notes that male cockroaches, on average, have shorter lifespans than female cockroaches.  This may be a result of evolution. Females are primarily responsible for laying eggs, and thus, their future generations. They may have evolved to be more resilient against treatments as a result.

This was only observed in German cockroach females. It may not apply to other household cockroach species.

How Does Soap Kill Roaches?

While the soap-and-water fix isn’t a myth, there are still falsehoods surrounding why this solution works. Some believe it’s because soap is designed to kill bacteria. Since roaches are dirty creatures attracted to dirty areas, it’s assumed that they can’t stand the cleanliness. However, that’s not the case at all.

A large majority of insects produce an oily and waxy outer coating. This cover acts as a protective surface against bodily harm. It also helps the cockroach maintain hydration and repel water off its body.

When you put soapy water onto a cockroach, the soap removes this protective, waxy film. This leaves them vulnerable to extreme water loss and water damage.

Furthermore, roaches have a unique respiratory system. Instead of lungs, they have spiracles. These breathing passages allow them to take in oxygen and expel carbon dioxide. With the ability to close these spiracles, they can avoid drowning. However, soapy water disrupts this process.

A soapy solution can coat and block these spiracles. Cockroaches will struggle to open or close their spiracles once they’re fully coated, hindering their ability to breathe. If sufficiently covered in soap, roaches will be unable to draw air. This results in death. In fact, it’s one of the only ways to suffocate a roach.

Cockroaches will eat soap if there’s no other food available. That’s because bar soap, in particular, is made from ingredients such as fat and oil. This gives it a moisturizing effect on the skin, a pleasant smell, and some medicinal benefits. For a roach, these ingredients also contain:

In particular, bar soaps contain carbohydrates. This substance is a desirable part of a cockroach’s diet. According to the National Library of Medicine, it helps them retain nutrients and boosts male pheromone release. The latter is very important for attracting mates, and consequently, the survival of their population.

It’s not the soap itself that cockroaches want to eat. Yet, if no other food can be found, they will seek out a bar soap to eat in your bathroom—the more organic or natural the soap, the better. Feeding on the soap will cause a roach no harm. If they are coated in the substance, it can lead to their death.

What Type of Soap Kills Roaches?

If you want to kill roaches using household soap, then you have two options:

The main difference between them is the additives.

Soap bars contain additives that work as scents and skin softeners. To create a roach poison with soap, you should:

Make sure that it has a 32% or higher concentration. There’s a high likelihood that any sprayed roaches will die within 24 hours at this level of intensity.

While bar soap and liquid dish soap are effective against cockroaches, the liquid kind may be the best. Its additives cut through heavy grease and kill bacteria. Because of this, it tends to be harsher.

Liquid soap is also easier to mix with water and use in a spray bottle. If you don’t want to melt down bar soap, then liquid options are best. Since liquid soap is more chemically processed, it contains fewer fats or oils. As such, unlike bar soap, it won’t attract any roaches while lying around. You only need:

How To Kill A Roach With Soap

When you encounter a cockroach, remember to:

Cockroaches are persistent insects, so you’ll need to spray them regularly.

Is Soap A Good Roach Poison?

Soap and water may seem too simple to be an effective pesticide. However, it does work in a limited way.

Soap is not toxic to animals and people in small quantities. It’s ideal for those with pets or young children.

Soap is readily accessible in most convenience stores. Some can be purchased for less than $1. This makes it ideal for people who don’t have the spare funds for:

Those perks aside, these elements can drive you away from soap:

Studies have proven that different cockroaches react to the soap in different ways. If you spray an American cockroach, it may have a 50% chance of surviving. German cockroaches, however, are more susceptible.

Many commercial pesticides, even found in stores, promise a higher kill rate. They won’t discriminate against the type of cockroach either. If you’re unwilling to give roaches a 50/50 chance at living, consider more traditional methods.

If you’re dealing with one or two roaches, soap and water can work. With that said, you can’t handle a full infestation by killing a single roach at a time. You’ll need to take more drastic measures.

Requires You To Be Present

While it’s also the case with insecticide sprays, this soap-and-water method requires you to be present to kill roaches. Because this insect mostly comes out at night, you may not be able to tackle an infestation easily.

Soap and water can kill roaches, but not in the way that you’d expect. It makes them more vulnerable to drowning. Don’t leave soap lying around, as roaches will eat it if no other food sources are available at the time.

1 thought on “Does Soap Kill Cockroaches?”