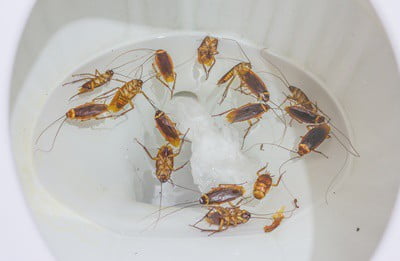 Cockroaches are extremely resilient creatures, but they still need to breathe oxygen to survive. This can lead you to believe they can be easily drowned. If you were to submerge a cockroach in water, you could wait it out. Likewise, you could turn on the tap to flush any roaches down your drain.

Roaches are hard to kill with water. They’re bad swimmers, but it’s unlikely that they’ll drown as they can hold their breath for up to 30 minutes underwater and 40 minutes above water. They do this by closing their spiracles, allowing them to float. In addition to giving them time to escape, they can bob up to the surface to get oxygen.

Hot water can kill cockroaches, but they’d need to be fully submerged. Here, it’s the heat killing the roach, not the water itself. Roaches cannot survive temperatures over 125 degrees, especially in direct contact. Cold water would need to be below the freezing point to harm them. Some species, like the oriental cockroach, even like living near water.

Do Roaches Drown In Water?

Roaches can die in water. Like any air-breathing creature, if they’re fully submerged in water and unable to come up for air, they will eventually drown. They do not possess gills or organs that would allow them to filter oxygen into their bodies, despite being surrounded by water.

However, it won’t be easy to drown a roach. You won’t find many dying by accident from contact with water in the wild. That’s for three main reasons:

Unlike most creatures, roaches do not breathe with lungs. Instead, they rely on a spiracle respiratory system. In practice, you’ll find a roach has several holes or pockets layered across its body. These open and close, like valves, to let in air.

This is how a cockroach breathes. It can do so even if its head is submerged in water. The roach doesn’t need its face to take in air. In fact, a roach even breathes discontinuously to make itself even more durable.

Cockroaches can seal up these holes in times of danger. For example, if they’re sprayed with poison and don’t want to inhale it. In water, roaches can close up their respiratory system and keep water out of their body.

This also traps air inside of them, which allows cockroaches to float. You’ll find it difficult to submerge a roach, even if you’re dead set on drowning it. The roach will continue to bob up unless it’s sustained an injury, like a crack in its exoskeleton. In this case, the damage to its body, and its spiracle respiratory system, will let water in.

Alongside floating, cockroaches use their full-body lungs to hold their breath. They can do this for an impressive amount of time. When fully submerged, a roach can last up to 30 minutes without air. This gives the roach ample opportunity to:

What’s more, roaches are good at playing dead. They may lie in the water and seem diseased when they’re really just holding their breath. They’ll wait for an escape route and then scurry to safety.

Roaches can’t climb entirely flat surfaces, like glass. Just like any creature, if they’re faced with a slippery slope, like the inside of your toilet bowl, they may struggle to climb it. However, roaches do have an impressive ability to climb.

So, imagine a roach falls into a bucket of water. It can likely find traction somewhere within the bucket. This allows it to crawl back out without any damage. You can’t count on placing a roach in a glass of water and hoping that it’ll drown.

Roaches can’t technically swim. You will find some species can navigate underwater, to an extent. Oriental cockroaches, for example, have a greater affinity with water than American cockroaches. However, this navigation is mostly incidental.

When a cockroach seals up its spiracles, it will hold air inside its body, causing it to float. At this point, it will naturally bob up to the surface of any water source. Of course, the panicked roach will also paddle its legs in a mad scramble. This can, to some extent, help guide it around to the edge of a buck or the opening of a drain. When underwater, it may be able to paddle around but with limited mobility.

It’s not intentional behavior and isn’t effective. As such, it’s not really swimming above or below water. This is for two main reasons:

Cockroaches have legs that are rather dexterous, able to climb on most surfaces. However, the shape and build won’t help with swimming. While a cockroach can paddle in a frenzy, it won’t be able to create enough drag with its legs to propel itself. More than likely, a roach will helplessly spin in circles.

Cockroaches are not water-fairing insects. They never developed the proper instincts on how to navigate in water or properly swim. If you place a roach in water, it may just freeze up and hold still rather than waste energy.

If it tries to swim, it will not synchronize the paddle of its legs to guide it in a direction. Instead, the mad scramble will have all its legs working in different sequences. This can throw off its trajectory, causing it to make no progress.

Even if a roach was built to swim, it wouldn’t know how. The same is true whether it’s above water or below it.

How Long Can Cockroaches Survive Without Air?

Cockroaches need some oxygen to survive. If they’re completely deprived of air, they will eventually die.

Of course, you may imagine that submerging a cockroach underwater will do the trick. However, roaches are good at holding their breath. Unlike humans, who have a single channel through which to breathe air (the throat), roaches can inhale from anywhere on their bodies. More importantly, they can close up their spiracles and create an air-tight seal.

This comes with a caveat, however. Roaches can hold their breath for different amounts of time. That depends on how much air they have access to. When submerged underwater, a roach will be deprived of outside oxygen. The little that exists in the water itself won’t be enough. Roaches don’t have gills to filter it out and into their bodies. Here, a cockroach will die within 30 minutes.

However, if you seal a roach up in a plastic bag, it will be able to breathe for longer. This can be up to 40 minutes, as plastic bags aren’t 100% airtight. Some oxygen will seep in through the plastic and give the roach the help it needs.

Cockroaches are resilient against temperatures, but they aren’t impervious. If one is exposed to heat of more than 125 degrees Fahrenheit, it will die. Even lower temperatures are uncomfortable for roaches, as proven by a study by the Department of Health, Education, and Welfare. In Phoenix, cockroaches tended to disperse from manholes during the summer, when temperatures rose. Even 95 degrees Fahrenheit drove them out in search of better shelter.

This is true for air temperature, but especially water temperature. A study by the University Of Nebraska-Lincoln showed that exposing roaches to air temperatures of 115-120 Fahrenheit was sufficient to eradicate cockroaches. However, this exposure had to be for 5-6 hours.

In contrast, the water of an average washing machine reaches 130 degrees Fahrenheit or more at its hottest setting. This is a more precise, on-contact heat, unlike with air temperature. This means if there’s a cockroach tangled up in your shirts, a wash should do it in. However, the machine must be set to the hot water setting, as warm water is only 110 degrees.

Water will come to a boil once it reaches 212 degrees Fahrenheit, which is well above a cockroach’s threshold. If you were to pour boiling water over a cockroach, this would be able to kill it. However, you must submerge the cockroach in this water. A cursory splash may only hurt the roach but not kill it. Roaches need to be exposed to these temperatures for more than just a few seconds, as they may survive the initial impact.

Can Roaches Be Hurt By Cold Water?

If you’re looking for a one-two combo of pest control, then you may wonder if cold water could also harm roaches. After all, if you don’t have boiling water on hand, maybe you have ice water. Unfortunately, roaches are more resilient against cold than heat. The nature of water’s freezing point also works against you.

A study published in Physiological Entomology proved this by freezing a New Zealand alpine cockroach. After being frozen at 32 degrees Fahrenheit, the cockroach was able to recover. It was lethargic but fine. Temperatures below this gave the tested roaches more difficulty. They died when frozen at 14 degrees Fahrenheit and then thawed.

Because water freezes at 32 degrees Fahrenheit, your glass of water won’t do any damage. The cockroach would need to be frozen solid. Once it was, the temperature would need to drop below what most home freezers are set to. Throwing ice cubes at it certainly won’t help unless you were to smash the roach with them.

You may assume roaches aren’t fans of a quick swim. For the majority of species, especially your average household roach, that’s true. German cockroaches and American cockroaches, the most common types found in the home, don’t prefer water. They only need moisture and water sources to drink and stay hydrated.

Oriental cockroaches are known for liking water. These species can be found near open water sources, such as flooded basements. In your home, they’ll seek out bathtubs, showers, or puddles around the foundation of your home. In the wild, they’ll gather around ponds or creeks. They like water so much, in fact, that they’re also called water bugs.

Even still, oriental roaches can’t hold their breath forever. They’re not great swimmers, and you won’t find them floating in water for fun.

What’s The Best Way To Drown A Roach?

As mentioned, roaches survive the worst of water by holding their breath. By sealing up their bodies, they become a closed unit. Because of this, the most straightforward method of drowning a roach is by:

The roach would be unable to keep the water out of its body. It couldn’t effectively hold its breath. However, this isn’t an effective method. If you could crush the roach enough to break its exoskeleton, you could smash it to death.

Aside from that, a cracked exoskeleton would expose the roach to a range of other health issues. It may not be able to recover and die anyhow. On the whole, you can’t rely on water to kill cockroaches.