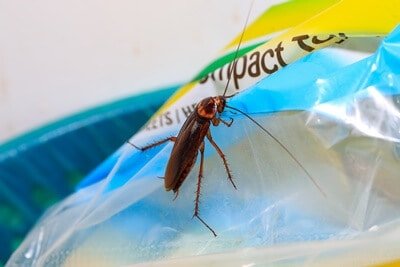 If you’re seeking a more creative way to remove cockroaches from your home, you may consider suffocation. After all, cockroaches need air to survive. Trapping them in a plastic bag and waiting for them to do seems like a good solution. In truth, cockroaches are highly adaptable, and suffocation isn’t an effective pest control method.

Cockroaches can hold their breath for up to 45 minutes, even when in a complete vacuum. Moreover, the air inside a sealed plastic bag can sustain a cockroach for up to 3-5 days before it eventually dies from suffocation. Depending on how tight the plastic bag is, the cockroach might escape before it runs out of air.

Cockroaches cannot suffocate in a sealed fridge. If kept underwater, their ability to float will make it hard to fully submerge them. Even if you did, 45 minutes may become hours if an air pocket is found. This ability to survive on little oxygen is a credit to the unique respiratory system of cockroaches.

Cockroaches require oxygen to survive. As such, they will eventually die of suffocation if they’re cut off from their air supply. They cannot breathe other gases alone, and they cannot hold their breath indefinitely.

With that said, cockroaches are hardy insects by nature. They can survive for long periods of time without air. As a matter of fact, if a cockroach is trapped in a sealed plastic bag, it can survive for 3-5 days.

That’s because cockroaches have a unique respiratory system. It allows them to process oxygen more effectively. Their small size also means they need little air to survive. More so, they can hold their breath and continue functioning without difficulty for up to 45 minutes.

How Do Roaches Survive Without Air?

Cockroaches endure so long with limited air due to the design of their respiratory system.

Contrary to what most people think, cockroaches don’t have lungs. Instead, they draw up air through respiratory openings on their bodies known as stigmata. Adult roaches have 10 pairs of stigmata.

There are 8 of these located on their abdomen, while the other 2 pairs are found on their thoracic cavity. The stigmata on a cockroach’s body lead into external openings known as spiracles.

Their function is to bring oxygen into the trachea. A cockroach’s trachea has tiny branches known as tracheoles. These supply oxygen to the insect’s body tissues.

The decrease in pressure causes the spiracles in the lower abdomen region to close, while those located in the thorax open up. Oxygen enters through the thoracic spiracles and is pushed into the tracheoles via the tracheal tube. Once there, the tracheolar fluid supplies the oxygen to body tissues.

During exhalation, the tergo-sternal muscles tighten up to increase the pressure inside the roach’s body cavity. The high pressure prompts thoracic spiracles to close while the abdominal ones open to expel carbon dioxide from the body.

How Do Roaches Hold Their Breath?

The respiratory system of cockroaches is efficient because it delivers oxygen directly to the cells in the absence of lungs. Furthermore, it enables them to hold their breath for long periods of time when the need arises. They do this by shutting their spiracles to prevent oxygen from entering.

Cockroaches do this to prevent excess oxygen (which can be harmful). Similarly, cockroaches will hold their breath to allow for carbon dioxide to build up before it is expelled.

This ability to control breathing makes it possible for cockroaches to survive in confined spaces with limited air supply. In fact, Evolution has revealed that discontinuous breathing in cockroaches can help these bugs survive starvation.

Likewise, the Journal of Experimental Biology found that discontinuous breathing in cockroaches minimizes water loss. This limits the rate of dehydration.

Cockroaches can not only hold their breath to survive suffocation. They can even endure being stuck in a location where they can’t get food or water either. This makes it hard to suffocate a cockroach, and it doesn’t work well as a form of pest control.

Can You Suffocate a Cockroach?

It’s possible to suffocate a cockroach. However, the chances of it surviving are high. Cockroaches can survive for three-quarters of an hour without air. That makes suffocating them to death is easier said than done.

To kill a cockroach by suffocation, you would need to trap it in an air-tight plastic bag for 3-5 days. The cockroach would continue living inside the bag for some time. However, the trapped air would eventually run out.

How Long Can Cockroaches Survive Without Oxygen?

Cockroaches are well adapted to living in extreme environments. They can even survive for close to an hour inside a total vacuum and even longer in a vacuum cleaner.

How Long Does It Take to Suffocate a Cockroach?

In a complete vacuum, a cockroach can manage to avoid suffocation.

However, if you were to try to suffocate a cockroach in a plastic bag, it would take the cockroach up to 5 days to die. The trapped air inside the sealed bag would provide enough oxygen for them to survive on for several days.

Can You Suffocate Roaches in a Plastic Bag?

The plastic bag must be sealed to make it airtight. This prevents fresh air supply from entering the bag, thus reducing the lifespan of the trapped cockroach.

The plastic bag needs to be thick enough to withstand scratches and bites from a cockroach that is desperate to escape. Using a thin plastic bag to suffocate an adult cockroach is not likely to work.

After all, the cockroach can tear holes in the plastic to allow air to enter through, thus prolonging its life.

Can Roaches Suffocate in a Fridge?

Refrigerators are often air-tight. This can leave you to wonder if a cockroach caught inside may die of suffocation.

In truth, there is too much oxygen in a fridge. The cockroach would never use up the amount of oxygen present, so it would never die of oxygen deprivation.

That’s made worse every time you open the fridge, replenishing the supply. Even if the cockroach had little oxygen to survive on, it would be able to regulate the amount it needed.

Access to food and water in the fridge would give it energy, and the cold temperatures would lower its metabolic rate. This would allow the cockroach to wait until it could escape, or until more oxygen was let in.

Perhaps the best way to suffocate a cockroach is with water. Cockroaches cannot breathe in water and would be forced to close their spiracles to avoid drowning.

When they did, they would be cut off from all other oxygen supplies. Assuming the cockroach is fully submerged, it could drown in under 45 minutes when it ran out of oxygen.

Of course, this isn’t an effective pest control method. Cockroaches are able to float when their spiracles are shut, which makes it difficult to submerge them.

Were you to trap it in a water-filled container, the cockroach may still survive off the air pocket at the top of the container. This would enable it to survive for longer.

Cockroaches can die of suffocation, but this doesn’t make it an effective way to kill them. They’re highly resilient and possess a unique respiratory system that allows them to survive on limited oxygen.