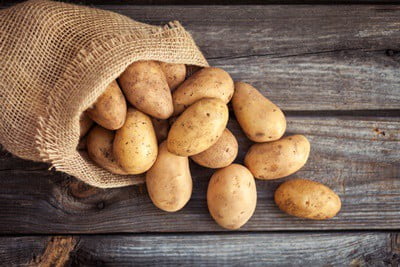 It’s a well-known fact that cockroaches aren’t fussy about what they eat. If you leave potatoes out, cockroaches will consume them. That’s because they contain several nutrients that these pests need, including starch.

Potatoes are best stored in a cool, dry place where they’re exposed to air. Unfortunately, this means cockroaches can eat them. To keep them safe, place them in an air-tight plastic container or metal bin. Choose a container without vents, as cockroaches can get through them. Plastic bags are a short-term fix if you use potatoes soon after buying them, but they’ll accumulate moisture and rot if they’re in there for too long.

Potatoes always taste better fresh, but pre-cooking them and placing them in the freezer until you need them is a good way to protect them until you’ve dealt with your cockroach problem. That’s because most cockroaches can’t acclimatize to the freezing temperatures.

Table of Contents show
1 Do Cockroaches Like Potatoes?
2 How To Store Potatoes Away From Cockroaches
2.1 Plastic Bags
2.2 Plastic Containers
2.3 Metal Bin
2.4 Natural Repellents
3 How To Store Boiled Potatoes Overnight
3.1 Refrigeration
3.2 Freezer
4 Is It Safe To Eat Potatoes That Cockroaches Have Been On?
4.1 Related Articles:

Not only do potatoes contain starch, but they turn into sugar as they’re digested, which is another essential nutrient for cockroaches.

Cockroaches eat potatoes using their strong chewing mandibles, which allow them to tear into them. However, it’s thought that cockroaches have started to avoid food items containing glucose, such as potatoes. According to Scientific Reports, they’ve become averse to the glucose found in roach baits, making them more careful about the foods they choose.

How To Store Potatoes Away From Cockroaches

You’re supposed to keep potatoes in a cool, dry place, which makes them vulnerable to cockroaches. If you suspect cockroaches have been feasting on your potatoes, look out for signs, including:

To keep potatoes from cockroaches, use the following methods:

Storing potatoes in plastic bags can help keep cockroaches away from them. However, this isn’t a fool-proof method, as they can bite through them.

Even though we don’t know specifically about the strengths of cockroach jaws, as PLoS describes, we do know that they can apply impressive force to their bites, allowing roaches to chew through organic and inorganic materials, including plastic.

Another thing to bear in mind is that potatoes stored in plastic bags trap humidity, meaning they’ll rot faster than if you keep them out in the open. That being said, if you use up your potatoes quickly, a plastic bag is a suitable method for keeping roaches away in the short term until you’re able to deal with the infestation.

Because cockroaches can chew through thin, single-use plastics, placing your potatoes in an air-tight Tupperware container offers better protection from cockroaches. There are two other advantages with this method:

While there are many Tupperware containers available, avoid any that have vents for pouring food and allowing steam to escape. This is likely to release the scent of the potato, alerting cockroaches of their position.

The holes are also small enough for cockroaches to crawl into them, even with their sturdy exoskeletons. Young cockroaches will easily get in, and because potatoes are 80% water, they won’t leave. Choose your Tupperware carefully and pick one that air-tight seals and thick walls.

Metal bins are some of the best cockroach-proof containers, as the pests can’t chew through them. They’re also a bit more breathable than plastic Tupperware tubs, preventing your potatoes from spoiling because of moisture accumulation.

Of course, leaving potatoes out in the open is always best, but if you have a cockroach infestation, they won’t stand a chance.

If you keep your potatoes in the pantry, use natural cockroach repellents to keep them away. Doing so means you might not even need to use a container, keeping your potatoes fresh and circulated with air. Cockroaches hate the smell of:

In particular, researchers at Iowa State University found that catnip is 100 times more effective at repelling cockroaches than DEET, the most common active ingredient in insecticides. Roaches are sensitive to two forms of nepetalactone, which is the active ingredient found in the catnip plant.

Place some catnip in muslin bags or sachets and position them near to your potatoes to naturally keep cockroaches away. Catnip’s especially effective against German cockroaches, one of the most common household roaches.

How To Store Boiled Potatoes Overnight

You shouldn’t have to throw good food away because you’re worried about cockroaches. If you have leftover boiled potatoes, you’ll need to carefully store them to keep them out of the way of hungry pests. Boiling potatoes first also keeps them fresh, allowing you to make use of them even with a roach infestation. There are two methods to do this:

Most people choose to refrigerate their potatoes to keep them fresh and ready for reheating. If you properly store them, they can last for up to five days.

Unfortunately, cockroaches can get into fridges. They’re attracted to the smell of food and any moisture produced by the machine. A leak normally causes this. They gain access through:

The cold temperatures won’t even kill them off – some species are known to handle the freezing temperatures of Antarctica. They also generate heat, so roaches will live near the motors and heat-generating compartments.

Placing your boiled potatoes in an air-tight Tupperware container will protect them, even if roaches are inside your fridge. This also prevents them from spoiling and going rancid while minimizing the contact between other foods, stopping potatoes from picking up their smells and attracting roaches.

A plastic, sealable bag is another suitable option if you don’t have a Tupperware box. Just remember that roaches can get through them, so you’ll need to use your potatoes up quickly.

A safer, more fail-proof way to keep cockroaches away from potatoes is to cook them and put them in the freezer. Thankfully, tropical cockroach species can’t live in freezing conditions, but they do live underneath freezers, entering them to grab hold of food for their colonies. That being said, it’s difficult for them to eat frozen food, and most won’t bother trying.

Putting the potatoes in a container in the freezer means the cockroaches won’t be able to acclimatize to the temperature fast enough to reach the potatoes. To freeze them:

If you’re dealing with a significant cockroach infestation and you need to protect your potatoes, freezing is a viable option until you know you’ve eradicated all pests from your home.

Is It Safe To Eat Potatoes That Cockroaches Have Been On?

Even if you can see patches of potato that look untouched, there’s no guarantee they’re safe. Cockroaches spread bacteria, diseases, and mold spores across your food. They eat and walk through decaying matter, transferring it onto your potatoes. They can also transfer:

Unless the cockroach pooped all over your potatoes, it’s unlikely you’ll even know they were there. This means it’s impossible to tell how much bacteria they’ve left behind. If you have a strong immune system, you’ll probably fight off the illnesses without any significant side effects. But this is only one possible outcome, and it’s too much of a risk to take. According to the International Journal of Scientific Research, cockroaches transmit:

If you contract these illnesses from eating contaminated potatoes, you’re likely to experience flu or flu-like symptoms, food poisoning, diarrhea, and vomiting. In fact, you can get sick from anything roaches carry.

In the event that cockroaches have gotten into your potatoes, throw the entire sack away, just in case they’ve contaminated all of them. Even though this will seem wasteful, it’s not worth the risk to your health.

However, if you’ve already eaten a roach-infested potato, there’s no need to panic. Most bacteria take a while to manifest, so you’ll have time to address any issues. Keep an eye on:

If you develop any of these symptoms, call your doctor right away in case you need treatment.

Potatoes are only one of the foods that cockroaches love. When cockroaches are present, few foods are safe. Don’t leave the potatoes out in the hopes that the pests won’t find them. Carefully store them and use natural repellent methods to keep them away.