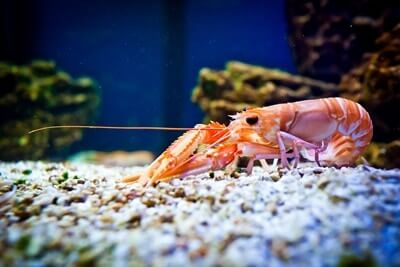 The term “cockroaches of the sea” has been used to describe prawns. That may seem weird since roaches are a household pest, while prawns are shellfish and considered food. Despite that, many shared traits strengthen their connection.

The Arthropoda’s phylum is where their similarity diverges into their own respective classes. Arthropoda describes well over 1.5 million different species, making it one of the largest species classifications. Under this species, these are the Insecta class, which includes the cockroach, and the Malacostraca class, which includes prawns. After all, roaches are insects, and prawns are not. This helps to explain their differences.

Are Cockroaches and Prawns the Same?

Cockroaches and prawns are not the same, but they’re very similar. They both fall under the same umbrella when it comes to their phylum. This species is known as Arthropoda. It indicates that cockroaches and prawns shared a common ancestor millions of years ago. Because of this, they share many of the same traits and characteristics.

However, as the years progressed, significant changes placed these two creatures into separate classes. Prawns evolved into crustaceans and learned to survive underwater. Cockroaches went down a different path, one that made them landbound.

That places cockroaches and prawns into different classes, even if their species is the same. Roaches are classed as Insecta, or insects, while prawns are classed as Malacostraca or crustacean. According to Zhi-Qiang Zhang, who wrote for Zootaxa, Arthropoda is one of the biggest categories of species found anywhere on the planet. In total, it covers over 1.5 million different types of creatures.

To get a better idea of how these two arthropods both relate and differ, let’s explain what defines them.

The word cockroach can make anyone’s skin begin crawling. Pictures or an in-person meeting with one brings feelings of disgust. These feelings are normal. After all, we associate the cockroach with a nasty pest that needs eradicating.

The cockroaches that most people know only account for .05% of the total roaches in the world. There are over 4,000 types of roach, and only 4 commonly annoy us in our homes. That does not make them good examples of their class. Even still, the household cockroach is characterized by the following:

Its origin mostly determines the cockroach’s color. However, it is a variation of brown. In some cases, the roach can present a pale green color instead of the normal brown. This happens in areas with high degrees of humidity.

Roaches have antennae at the forefront of their body. This helps them survive within their environment. Used for locating food, it also helps the cockroach escape predators or to walk without bumping into things.

The preferred environment for cockroaches is a dark, humid, and isolated area. They are normally associated with areas that are not kept strictly clean. That’s especially because they give off a musty odor and are attracted to decay. Even still, the cockroach usually prefers to eat:

Prawn is a term used to refer to the long, spindly creature found at the bottom of many oceans or rivers. For the average person, you’ll know this as a kind of shrimp, especially those that grow to larger sizes. They’re used in cuisine worldwide, where they’re mixed into different recipes or cooked and eaten by themselves. The prawn is a part of:

Living in the water, these classes include animals such as lobsters, crabs, krill, and shrimp. The prawn is a small crustacean that has an exoskeleton – or external skeleton – and 10 legs. Roughly up to 5 inches in length, the prawn can live in almost any body of water, whether shallow or deep.

The title prawn is not a scientific name. It can be used interchangeably with the term shrimp to signify any large, swimming crustacean. As such, prawns are commonly known to have the following characteristics, which make them a part of the Arthropoda phylum:

The hard outer skeleton sheds to allow the prawn to grow as it gets older. This is a long and vulnerable process known as molding. Since shrimp or prawns are scavengers, they prefer to eat:

At a glance, prawns and cockroaches do look remarkably similar. From their skeletons to their legs to the design of their antennae, they were clearly drawn from the same evolutionary blueprint.

In fact, according to research by the International Archives of Allergy and Immunology, the same base components in shrimp that cause allergens can also be found in cockroaches.

To start, the cockroach and the prawn have exoskeletons. This places them into the Arthropoda phylum. Instead of containing their skeletons internally, both of these creatures wear them outside. It manifests as a thick outer shell that gives their bodies structure.

Exoskeletons are impressively strong and dense. Although it’s not 100% effective, both roaches and prawns use the exoskeleton as a way to protect themselves from predators.

Prawns even have what is called a rostrum. The top part of their exoskeleton juts out with a tip over their heads. This rostrum works like a saw, which the prawn uses to defend itself from attacks and jab predators. It’s not fully effective once the predator is too close, but it does give the prawn a chance.

In contrast, roaches do not have this extra feature. Their exoskeletons are smooth and tightly fitted.

Each of these creatures has multiple legs that look spiky, but they are completely harmless. A prawn will have up to 10 legs. Meanwhile, your average cockroach will only have 6.

Roaches make up for this disadvantage with their resilient nature. If a cockroach loses one of its legs, it can regrow it within a few weeks. It can also use its other legs to compensate for the lost one. It will recalibrate its balance so that it can navigate just as fast and efficiently as before.

In contrast, prawns are not so durable. If a shrimp loses one of its legs, it will struggle to rebalance its body. Its ability to swim will be far slower and more clunky. While prawns can also regrow their legs, they require more favorable conditions to heal properly.

If the water temperatures are too hot or cold, or the prawn doesn’t have adequate food, it will struggle to regenerate. It will likely get eaten by predators at this time.

The antennae in cockroaches and prawns look very similar. For both of the creatures, they are:

These antennae also serve roaches and prawns in the same way as they:

Without these sensors, both of the creatures would be effectively blind. Should either of them lose an antenna, it can be regrown. This will take far longer than growing legs, and the creatures are likely to starve or get eaten in the meantime. In this case, there are no differences between roaches and prawns.

A major difference between roaches and prawns is size. The prawn will usually grow to 5 inches in length. Occasionally, they can even get longer. On the flip side, roaches mostly stay around 2 inches at their longest. In extreme cases, they exceed this by an inch, but those instances are rare.

For both of these creatures, the sizing is small in comparison to their predators. This allows them to hide away in spots that hunters can’t reach.

Aside from their physical design, roaches and prawns share many behaviors. This can include broader points, like:

Yet it can also get more personal, based on things such as:

When it comes to actions and lifestyle, how do roaches and prawns compare?

Cockroaches and prawns have an advantage over other animals that surround them. They’re fast movers. In fact, the mantis shrimp is one of the fastest creatures in the entire ocean. This is a credit to their aerodynamic body shape and number of legs.

In the same way, roaches use their wings and 6 legs to propel themselves forward at high speeds. While this is only 3 miles an hour to a human, it’s impressive for a 2-inch bug. Now, let’s compare a prawn’s speed to a cockroach’s:

As we can see, roaches are much faster than shrimp. However, they also don’t have the resistance of water or a larger body to contend with.

The lifespan of a cockroach and prawn are roughly the same. On the lower end, they live for about 1 year. They will reproduce several times throughout these months. Of course, predators, intervention from humans, or poor environmental conditions may cut this lifespan short.

However, prawns can be longer-lived. For certain breeds and in certain conditions, a shrimp can live up to 6 years. Meanwhile, it’s rare for a cockroach to see beyond 2 years. The American cockroach enjoys the longest lifespan, and females live no longer than 700 days.

Prawns live in salt- or freshwater bodies of water in warmer climates. A shrimp can live without water for a short amount of time. However, if taken onto land, they will eventually suffocate or dehydrate and die.

In contrast, roaches can live nearly anywhere on land. They have been known to extend from the balmy jungles of India to the chill planes of Alaska and everywhere in between. They can hold their breath for a considerable amount of time but cannot survive in water. In fact, many species avoid the open water, as they cannot swim.

However, both creatures are known to wander for great distances in search of food. They do not maintain a fixed territory. They will happily expand to new destinations if the pickings are good.

As scavengers, cockroaches and prawns will eat almost anything. Both are considered living recycling machines, able to consume decay and waste left behind from other creatures. This ensures they play a valuable role in the ecosystems they inhabit.

At a glance, their diets are unrelated. Cockroaches are known to eat plant matter, garbage, and even human waste. In contrast, prawns prefer dead fish, worms, and crabs. However, that’s simply because they live in different environments. If you were to provide a roach with a prawn’s diet, or vice versa, it would happily eat it.

Are Shrimp Cockroaches Of The Sea?

In a sense, prawns are the cockroaches of the sea. They share most of the primary traits found in cockroaches, including:

However, you can find many of these characteristics in other insects and crustaceans. Shrimp and cockroaches aren’t special. There are also clear differences that set these two apart. To name a few, cockroaches have:

Prawns and cockroaches are easier to compare to other members of their own classes. Any characteristics that they share is just a product of being an arthropod.