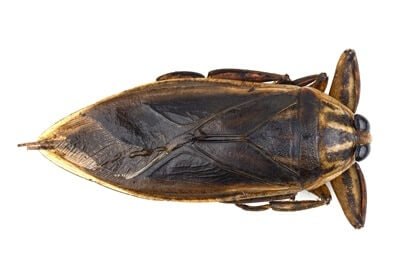 Water bugs are commonly mistaken for Oriental cockroaches because they prefer wet, humid environments. However, they’re an entirely different species of aquatic insect under the order Hemiptera. They also look and behave differently to cockroaches, although it’s not always easy to tell the difference between them.

Water bugs are much larger than cockroaches and only have four legs. They have antennae like roaches, but they’re much shorter and sit under the eyes. Unlike cockroaches, who are prey insects, water bugs are predators and feast on the juices of small fish, tadpoles, and other small invertebrates. Water bugs don’t tend to live in homes, and they rarely colonize indoor dwellings. Instead, they live in ponds, marshes, and slow-moving waters.

Both cockroaches and water bugs come out at night to forage for food and water. However, unlike cockroaches who are scared of bright lights, water bugs are attracted to them and sometimes stray into houses at night.

Are Water Bugs and Cockroaches the Same Thing?

As mentioned, the term “water bugs” creates a source of confusion. These insects are not the same thing as cockroaches as they’re from a different order. However, many people refer to Oriental cockroaches as “water bugs” because they prefer living in moist drains and sewers. Despite this, they’re not from the same insect family and are two entirely different entities.

If you think you see a water bug in your home, it’s more likely to be an Oriental cockroach. Understanding the differences between the two can help you determine the type of bug:

How To Tell the Difference Between Water Bugs and Roaches

While cockroaches and water bugs share some similarities, there are also many ways to tell them apart. The main differences between water bugs vs. cockroaches are as follows:

Water bugs and cockroaches look similar in some ways, but several differences set them apart. For starters, water bugs are typically brown or gray and look similar in color to a dead leaf. This is not far off a cockroach’s coloration, but expect water bugs to be slightly lighter than roaches with fewer color variations.

Some cockroach species also have yellow or cream bands around the head and wing area, which water bugs don’t have.

One of the most significant differences, however, is the antennae. Both cockroaches and water bugs have them, but they are much shorter on water bugs and aren’t curved at the tips like a cockroach’s. The antennae are shorter than a water bug’s head and sit underneath the eyes instead of above them.

Water bugs have two pairs of legs (four legs in total) that are much thicker than a cockroach’s six legs. This is one of the most obvious and apparent ways to tell the two insects apart. Water bugs are also more rounded in shape than cockroaches but have a pointed tip at the back where the wings cross over. This differs significantly from a cockroach’s more oval-shaped body.

Where Do Water Bugs Live?

According to the Canadian Journal of Zoology, water bugs are aquatic insects that live in freshwater ponds, marshes, and slow-moving pools. They typically hide under vegetation and debris under the surface of the water. They can also be found in sewers and drains – or anywhere that provides a suitable enough water source.

They’re also drawn to bright lights. This means that they’ll seek out street lights, porches, and neon signs. When they’re removed from the water, they become rigid for several minutes to feign death. This is a defensive action they use when they feel threatened. They’ll soon snap back to life once they feel it’s safe to do so.

Cockroaches love moist areas but don’t like being in the water. Cockroaches also tend to avoid light because they’re nocturnal creatures. If faced with sudden artificial light, they’ll scurry away immediately. Cockroaches can be found outdoors in forested areas or marshlands, feeding on decaying wood or carcasses. Like water bugs, Oriental cockroaches live in drains and sewers where they’re close to water sources.

Water bugs have wings that enable them to fly between various bodies of water during mating season. When they’re not in use, the wings fold down into an X shape at the bottom of the abdomen. According to Minnesota Pollution Control Agency, water bugs frequently leave the water and fly about in parking lots and around large lights.

Cockroaches aren’t common around lights. In fact, they don’t like being around light because it exposes them and makes them vulnerable to predation. While water bugs have flying abilities, they’re far more likely to hang out in ponds and wetlands. However, they swim incredibly fast, so you’ll rarely see them in their natural habitat.

As mentioned, most cockroaches have wings, but few species fly. Even the ones that can only fly if they need to in extreme conditions. The good news is that the most common household cockroach species don’t tend to fly. On the other hand, these species do:

Similarly, if you spot a cockroach flying towards you, it’s not actually heading in your direction on purpose. It’s simply gliding uncontrollably in a specific direction – and you happen to be standing in its flight path.

Water bugs aren’t considered dangerous, but they will bite if they’re threatened. Their bite is toxic and causes red marks to form on the skin. If you don’t clean it properly, the bite can become infected and produce the following side effects:

Water bugs have earned the nickname “toe-biters” because of their ability to nip human skin. That being said, they’re not harmless as they don’t actively seek out humans to bite. If you get too close or startle them, they’ll bite you in self-defense.

Cockroaches also bite, but only as a last resort. They rarely get too close to humans because they’re intelligent enough to realize that doing so puts them in harm’s way. Cockroach bites only really happen when an infestation becomes so overrun that roaches become desperate for food.

Cockroach bites aren’t painful, and humans rarely feel them. In fact, their mouthparts aren’t strong enough to bite through human skin. However, cockroaches carry harmful bacteria that cause diseases and nasty infections. If you suffer from a roach bite that breaks your skin in any way, there’s a high chance of germs getting into the wound and making you sick.

Are Water Bugs Bigger Than Cockroaches?

Water bugs are larger than cockroaches, reaching around 2 to 4 inches in length (although most sit around the smaller end of the scale). This makes them one of the largest true bugs in the U.S. and Canada. Cockroaches are smaller, particularly the German and brown-banded species, while juvenile roaches and nymphs are the smallest of them all.

Cockroaches are small to fit inside small spaces. According to the Proceedings of the National Academy of Sciences, cockroaches can compress their bodies by 40 to 60%, squeezing through the tiniest gaps.

Because of these significant size differences, it’s relatively easy to tell water bugs and cockroaches apart. If you have nothing to compare either bug to, it can be difficult to gauge the size differences. This means you’ll need to observe the bug for other features to identify what you’re looking at.

Are Water Bugs Predators or Prey?

Cockroaches are at the bottom of the food chain. They feed off decaying matter and debris, including dead animals, and scavenge for whatever food they can find. They’re preyed upon by:

Water bugs are predators and active hunters. They stalk unsuspecting prey by hiding amongst plants and debris before ambushing them. They have clawed feet on their front legs that enable them to grab and grip onto prey. Once caught, water bugs bite their prey, injecting them with digestive fluids to kill them and suck out the juices.

Not only are giant water bugs predators, but they’re at the top of their food chain and keep small invertebrate populations under control.

Because water bugs are solitary creatures that hunt and feed alone, they’re rarely found in houses and aren’t considered pests. If you find one in your dwelling, it’s likely gotten lost or wandered in by accident. Unlike cockroaches who set up large colonies, feed off household items, and bleed profusely, you rarely have to worry about a water bug infestation.

That being said, they are attracted to lights, so you should shut all doors and windows when it gets dark to prevent them from getting inside your home.

Do Water Bugs Come Out in the Day?

Water bugs adopt a nocturnal behavioral pattern by remaining in their nests throughout the day and leaving at night to search for food and water. As mentioned, they remain under the cover of debris and pond litter where it’s cool and dark.

Water bugs predominantly come out during the summer and remain active until fall. Once it starts to get cold, you’ll see them far less often. Cockroaches display similar behaviors in that they avoid coming out when it’s light, waiting until darkness falls to forage for food and water. Cockroaches have evolved to understand that moving in the daytime leaves them vulnerable to predation and humans.

Roaches will only come out during the day if the colonies become overpopulated and there’s too much competition for vital resources.

Are Water Bugs as Bad as Roaches?

Water bugs are nowhere near as bad for your health as cockroaches. That’s because they don’t harbor the same bacteria or pathogens. Cockroaches are known for carrying and spreading diseases and infections, such as:

Cockroaches also put anyone coming into contact with them at risk of:

These conditions trigger various symptoms, including breathing difficulties, rashes, and swelling to the face, nose, and mouth. You don’t even need to touch roaches with your bare hands to be at risk of developing these infections and diseases. Even coming into contact with their bodily fluids and feces can put you in danger.

Even though water bugs are more willing to bite humans than cockroaches are, they’re not as invasive and don’t tend to infest homes in the same way. If you see one cockroach, there usually are more lurking nearby. The same can’t be said for water bugs.

As explained, water bugs only really enter dwellings by accident or because they need water. They’re also more likely to go into a home if bright lights entice them in. Additionally, water bugs are more willing to leave your home after they’ve found it free of standing water. Cockroaches will remain. They may not bite, but they can quickly overwhelm your home. That’s predominantly why water bugs aren’t known as pests like cockroaches are.

While there are similarities between cockroaches and water bugs, they’re not as alike as you may have first thought. The good news is water bugs rarely cause a problem inside homes. Cockroaches are pests that need to be eradicated.