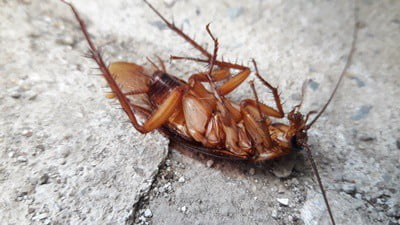 It can be difficult to see a cockroach writhing around after being sprayed or stepped on. There’s a long-standing debate on if cockroaches feel pain. Many studies have left researchers with more questions about philosophy than answers about pain receptors.

Cockroaches do not feel pain. When sprayed, stepped on, swatted, or hit, cockroaches display nocifensive behavior. Nociceptive pathways cause physical behavior changes when a cockroach is stimulated. That’s why cockroaches squirm and twist around when touched. However, these are nothing more than physiological patterns, lacking the sadness, distress, and discomfort that come with pain.

A cockroach’s neural network is not complex enough to send those distress signals. Nocifensive behavior is a trait all insects have to avoid anything in their environment that could damage their bodies. As such, when a cockroach is injured, it does not feel anything. It only responds with an automatic, evolutionary instinct to escape danger.

From a scientific and biological point of view, cockroaches cannot feel physical pain because cockroaches have much simpler nerve systems. Their neural networks are also far more limited than humans.

For example, cockroaches do not have a spinal cord or a brain with multiple lobes. They may have neurons, but these are far less than a human’s. While roaches may have bundles of ganglia spread throughout their body, these aren’t as complex as our nerves.

This makes it difficult for roaches to feel much beyond their basic necessities. You’ll find this is true for most insects and many small organisms. However, that doesn’t mean roaches are creatures entirely without feeling. Roaches can:

These, of course, all seem like painful experiences. So, how do roaches navigate without pain? The answer lies, ironically, in how their pain receptors work.

Do Cockroaches Have Pain Receptors?

Roaches’ pain receptors work differently than our own. To understand how roaches can have pain receptors without experiencing pain, we first need to break down the intricacies of these little nerves.

If a human touches a hot pan, our pain receptors (also called nociceptors) will create a stinging sensation. This leads us to pull away from the source of harm. That stops further damage from happening. This state is known as nociception, where nociceptors detect severe tissue damage.

It’s a survival mechanism that ensures an organism takes as little damage as possible. Like any other living creature, roaches are at risk of sustaining damage they can’t afford to ignore. However, they have thicker nerve fibers and specialized neurons to provide all the information they need. They don’t need the extra step of pain in this process.

A cockroach’s pain receptors are about activating the insect’s escape instincts. This encourages a cockroach to run away from the harm. Roaches don’t need to feel stinging, burning, biting, or other kinds of sharp pain to make them react. Researchers call this nocifensive behavior.

That can seem like a stretch in logic. How do we know for sure that an escape instinct isn’t just pain in a different package? Scientists have worked to answer that question.

Roaches have three ways of experiencing sensations that are considered painful by humans. Within a cockroach’s nerve system, you’ll find:

When those work together, a roach can detect damage but not feel pain. A study performed by Ben Gurion University tested this by exploring nociceptive pathways in roaches. This was done through noxious stimulation, which is different from tactile and wind stimulation. It targets and affects an organism’s tissues through:

In this study, scientists reaffirmed existing proof that cockroaches have nerve fibers that exist solely to perceive noxious stimulation. These specialized nerves are a bit thicker than tactile sensory fibers. They are a cockroach’s main method of detecting damage.

Using the above testing methods, scientists were able to study exactly how roaches handled painful experiences. The table below shows their responses to different types of tactile and noxious stimulation:

When treated with brief tactile and noxious stimulation, cockroaches attempted to flee for an average of 6.7 seconds and 8.8 seconds. The average between both forms of stimuli was 7.75 seconds, and with a 2.1-second difference.

The longevity of the nocifensive behavior is mostly negligible in the grand scheme of things. The real difference is revealed with continuous stimulation. After only 3.7 seconds, cockroaches stopped attempting to escape, despite continuous tactile stimulation.

This proves that the roach’s sensory neurons received an initial shock. However, they relaxed once the body realized there was no threat. That isn’t a response you’ll find associated with pain.

When receiving continuous noxious stimulation, cockroaches attempt to flee from the source for a total of 15.2 seconds. That means they perceived tissue-damaging stimulation for longer periods than normal stimulation. It also proves that cockroaches have neurons solely dedicated to detecting tissue damage.

Can Roaches Feel Pain Without A Head?

In most creatures, the head is the center of all neural information. When decapitated, it’s understood that most animals are dead and can no longer feel pain. However, we know that roaches can continue to live without their heads. So can they still feel pain or stimulation in this state?

Scientists tested the reaction of cockroaches to noxious stimulation when their head was severed. They found the nocifensive response was minimal compared to a cockroach that was intact. This means that cockroaches have nociceptive pathways connected to the brain.

A roach’s body will still react to stimulation, allowing it to move around and avoid objects. However, it won’t feel as much stimulation as it did when its head was attached.

Roaches use their pain receptors differently than us. Their nociceptors send signals to the brain that cause them to recoil from the source of the stimulation. This reaction is purely physiological, without the discomfort or distress associated with pain.

Isn’t that reaction a kind of pain? Are roaches feeling pain just differently than humans do? Of course, we must remember that human beings are empathetic creatures. If you stomp on a roach or spray it with insecticide, it’s not uncommon to feel bad as it writhes. Nonetheless, there is a difference between pain and nociception.

Nociception occurs when sensory neurons detect stimuli that damage an organism’s tissue. In humans, this is usually followed by pain. There are many theories as to why humans feel pain. The most commonly accepted theory is that pain is a side effect of nociception. It’s no different than sweating, hypertension, pallor, and fainting.

In this paper published by Cambridge University Press, Dr. Shelley Adamo posits a compelling theory. Because cockroaches do not have as many output neurons as humans do, they cannot form the same neurological characteristics when experiencing pain.

Nociception induces a physical response that is not always voluntary or even conscious. It’s this involuntary response that doesn’t allow you to keep your hand on hot metal, even if you wanted to.

Why Do Roaches Writhe In Pain?

If you smash a roach, but it doesn’t die, it may thrash around. This can lead you to believe it’s in terrible pain and showing this. However, as mentioned above, reacting to stimulation is different than pain.

For example, when people are unconscious and unable to feel pain, they can still physically respond to stimulation. When it comes to pain and nociception, one can exist without the other.

Cockroaches may wiggle around after being injured. However, they do not feel anything; it is just their body instinctually responding to external stimuli.

Do Cockroaches Feel Pain When Sprayed?

Insecticides contain neurotoxins, a type of poison that compromises an organism’s nervous tissue. Once sprayed, a cockroach is unable to control its muscles. That causes them to spasm uncontrollably and then flip upside down.

Roaches have a high center of gravity. Because they carry the majority of their weight on their back, once flipped, cockroaches cannot get themselves back up. Many people believe that they are watching a cockroach slowly die. However, what you are witnessing is the cockroach steadily losing control of its body.

There is no pain involved when spraying a cockroach with insecticide. As a matter of fact, most of them do not die from being exposed to neurotoxic poison. If left upright, they can eventually regain control of their muscles and run away. If left on their back, what kills them is the inability to obtain food or water because of their immobility.

Is It Cruel To Hurt Roaches?

Many people believe that nociception, even without the traditional traits we associate with pain, should still be considered pain. After all, cockroaches want to avoid as much damage as possible, no different than humans. They’ve even developed nociceptors through evolution, which may prove they’re intelligent beings with feelings. However, theories such as these are more rooted in philosophy than in science.

What pain is and where it comes from has been a hot topic throughout the centuries. Early theories have been posited by philosophers such as Aristotle, Plato, and Hippocrates. Our understanding of biology and neurons is still relatively new. As such, older philosophical theories still shape the way we understand and study pain. That’s especially true when it comes to insects such as cockroaches.

All current studies point towards cockroaches not feeling any pain. Despite this, it’s best to keep in mind that studies were done on cockroaches, and their pain receptors are performed from a human perspective.