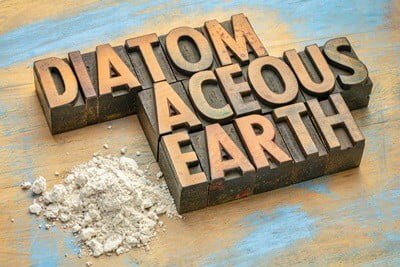 Removing cockroaches isn’t easy. These tenacious, elusive pests have even evolved to become resistant to insecticides. That’s why so many people have turned to diatomaceous earth to kill cockroaches.

Diatomaceous earth is a naturally occurring powder that’s extracted from diatoms. These are the microscopic, fossilized shells of algae and other aquatic organisms.  This fine powder consists of 80-90% silica. The high concentration of silica means that it’ll absorb all the water, oils, and fats from a cockroach.

Once a cockroach has walked through diatomaceous earth, it gets into its exoskeletons. This will damage the shell and cause dehydration. It’ll attempt to live on but without any nutrients, but will eventually die within days or weeks. Diatomaceous earth is safe for humans but deadly to cockroaches.

Diatomaceous earth is lethal to any insect with an exoskeleton. This includes cockroaches, which do not have bones or an internal skeleton. Instead, they have an external skeleton made out of chitin plates.

When cockroaches walk over diatomaceous earth, the powder sticks to their hairy legs and bodies. Here, it begins to work underneath the cockroach’s plates. Once it reaches the main inner body as fine, sand-like grains, it dehydrates the cockroach. Over a few days or weeks, it will cause death by desiccation.

Because of this, diatomaceous earth is toxic to all insects with an exoskeleton. However, it has no side effects on pets or humans. In fact, it’s used to treat various medical conditions in humans.

When other cockroaches come into contact with the carrier, they also die. This makes it an effective way to combat full-scale infestations. According to Integrated Pest Management, insects that are most vulnerable include those with:

So, you can use diatomaceous earth to reduce the number of cockroaches in your home.

What Does Diatomaceous Earth Do to Cockroaches?

Diatomaceous earth kills cockroaches by absorbing the key nutrients from their exoskeletons. As mentioned, the compound itself comes from fossilized remains of aquatic organisms, which become diatoms. According to the Journal of Chemical Education, diatoms produce 40% of the earth’s oxygen, and the largest is 1mm in diameter.

More importantly, this insecticide is chemically composed of up to 90% silica. When it comes into contact with a cockroach, it can absorb nearly all of its:

This causes cockroaches to dry out and die. Diatomaceous earth takes things a step further by damaging the exoskeleton itself. Since it has a microscopic honeycomb structure, it can slough its way through the protective shell. The powder then eats away at the lipids from the outer layer.

This causes the roach to lose water quickly and exposes it to more outside harm. It will struggle to absorb nutrients in the future and become vulnerable to predators.

Does Diatomaceous Earth Work for All Species of Cockroaches?

It can target cockroaches that have adapted to other forms of poison. According to Scientific Reports, cockroaches are evolving to be immune to certain insecticides. If the parents have been exposed to the poison and survive, they may pass on resistance to their offspring. However, diatomaceous earth circumvents that problem because it has:

Is Diatomaceous Earth a Roach Trap?

You can use diatomaceous earth as a cockroach trap because the afflicted cockroach will survive for long enough to carry the powder to its nest. The powder works as a delayed toxin, allowing the roach to eat any food coated with DE and return to its colony.

Along the way, the roach will spread the powder with its urine and feces. Other roaches will feed on the contaminated feces or traipse through them. When exposed to DE, the cockroaches will slowly die over several days or weeks.

How Effective Is Diatomaceous Earth Against Cockroaches?

Most commercial pesticides contain chemicals that target the respiratory or nervous system. They work to impair a cockroach’s ability to move, find food, and avoid predators. This brings about quick results, causing the cockroach to flip onto its back shortly after being exposed.

Diatomaceous earth doesn’t paralyze the cockroach. Instead, it absorbs the water, ensuring that it has no chance of survival long-term. It also spreads this to other members of the colony However, the effects will take place over several days or weeks. If you want to spray a cockroach and get immediate results, then DE isn’t the right solution.

Diatomaceous earth doesn’t kill cockroaches instantly, nor does it kill them on contact. Instead, it takes days or weeks for it to start delivering results. You may not see the dead cockroaches, but you will notice fewer cockroaches after this period. The required length of time also varies based on several factors. These include:

Where You Apply The Powder

Roaches must have direct contact with the poison or else diatomaceous earth won’t be effective. You have to sprinkle the powder anywhere that cockroaches travel, such as:

If you’re using diatomaceous earth to kill a colony, don’t expect immediate results. It takes time for cockroaches to spread around the poison. It will also take longer if the nest is small.

Likewise, a small amount of powder that will kill 2-4 roaches will be ineffective against 100+. You’ll need to apply more diatomaceous earth or use it in tandem with other roach traps.

Diatomaceous earth doesn’t kill roach eggs. To kill off the larvae, you’ll need to use commercial pesticides or other DIY treatments. Cockroach eggs are protected inside an enclosed black or brown capsule. This eggshell will be too well sealed for the powder to get in.

Diatomaceous earth is deadly to cockroach nymphs. If you notice a collection of eggs, you can spread the powder around the area and wait for them to hatch. Once they walk through it, they’ll eventually die.

Is Diatomaceous Earth Safe for Pets?

Unlike most pest control products, diatomaceous earth is not harmful to pets. It will only damage creatures with an exoskeleton, which doesn’t include birds, dogs, cats, or most other pets. In small quantities, it won’t even hurt animals that ingest the powder. However, you must only use food-grade diatomaceous earth.

Is Diatomaceous Earth Harmful to Humans?

Food-grade diatomaceous earth is harmless to people as it contains less than 1% crystalline silica. Many regulatory agencies, including the Food and Drug Administration (FDA), deem it safe.

How To Use Diatomaceous Earth Roach Traps

Learning how to apply diatomaceous earth can reduce the number of cockroaches in your home. Here is a step-by-step guide on how to build your own roach traps:

Dry Out Any Damp Areas

Diatomaceous earth needs to be placed in dry areas. If it makes contact with water or moisture, it loses its cockroach-killing properties. Sprinkle it in areas that lack humidity, such as the kitchen or bedrooms.

Identify areas where cockroaches travel frequently. You can spot cockroach routes by checking for visible signs, such as feces. Cockroach feces are cylindrical and resemble coffee grounds. You’re likely to find them in:

Spread a thin coating of diatomaceous earth in problem areas to make it less easy to detect. While cockroaches don’t like or dislike the smell or texture, they’re likely to walk around heaped piles. Instead, add a thin coating so that the poison can stick to their legs without them noticing.

Apply in All Entry Points

Apply diatomaceous earth to all entry points, including window frames, gaps around electrical outlets, and along the doorways. Make sure that these entry points are completely sealed and the area remains dry.

Crawlspaces And The Basement

Cockroaches are elusive pests that prefer dark and undisturbed spaces. Treat these hidden spaces with sufficient diatomaceous earth, especially if they usually remain unoccupied for long periods. You can use a leaf blower to cloud the basement or crawlspace with diatomaceous earth. Just be sure to wear a mask and eye protection.

Dealing with a cockroach infestation is not a one-day task. After your first application, reapply diatomaceous earth again after several days or weeks to get lasting results.

Aside from that, it’s easy for the dust to be washed away by wind or water. Reapplying the powder will ensure that no roaches manage to sneak past without consequences.