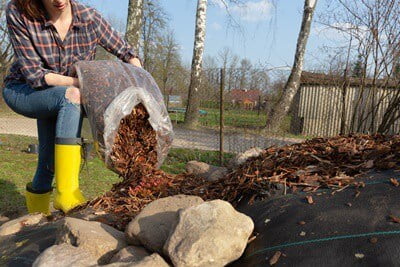 Finding out you have cockroaches in your mulch can be concerning. Not only must you remove them from your garden, but you need to take measures to prevent them from migrating inside your house.

Cockroaches live in certain types of mulch, such as pine straw and bark mulch. That’s due to the moisture and heat, allowing them to live, breed, and multiply. Some cockroaches feed off the decaying matter. However, before getting rid of cockroaches from your mulch, bear in mind that they’re decomposers that can release nutrients into your soil.

You can eradicate cockroaches from mulch by using diatomaceous earth and laying a thin 3-4 inch layer, being careful not to make it too thick.

Cockroaches need a constant supply of water to survive and multiply. As soon as their home becomes dry, they move on. Cockroaches like mulch because it allows water to permeate through it and into the ground. The mulch doesn’t stay too wet, so there’s no risk of the roaches drowning or suffocating. Instead, they’re left with water they can drink.

Depending on the type of material, thick layers of mulch mat together, forming a barrier against water. This leaves enough moisture for cockroaches to live off. The moisture also increases the humidity, producing warmth that cockroaches enjoy. Warm, moist environments enable cockroaches to breed and multiply.

It’s not just the warmth, and moisture mulch provides that cockroaches love. Most cockroaches forage for food at night under cover of darkness where they’re safe. This means that mulch is a great place for roaches to hide during the day, especially when it’s laid in a thick layer of six inches or more.

Mulch attracts American cockroaches the most, as they like to feed off decaying wood. Asian cockroaches are also partial to living amongst mulch.

As discussed, cockroaches are happy to live in mulch because it provides them with everything they need to thrive. However, cockroaches like the following mulch materials more than others:

Most cockroaches enjoy living in pine bark mulch because it’s lightweight, allowing cockroaches to bury deep into it. Straw also holds more moisture than other organic mulch materials, providing the perfect environment for cockroaches to live and breed.

Smoky brown cockroaches enjoy living in pine straw the most, but it attracts all kinds of pests. Cockroaches aren’t too fussy about where they live, as long as it provides optimal environmental conditions, which pine straw does.

Bark chips and shavings are another popular type of mulch for cockroaches. They’re particularly attractive to wood cockroaches who naturally live in woodpiles and use wood for shelter and sustenance.

Asian cockroaches also commonly call bark mulch their home. Again, however, all kinds of cockroach species are happy to live bark mulch. They eat decaying wood and use plant cellulose for energy and reproduction, producing the perfect conditions for breeding.

Are Cockroaches Beneficial to Mulch?

Cockroaches are a pest that you no doubt want to eliminate, but unless they breed and cause a significant problem in your yard, you might want to think twice about getting rid of all of them.

As explained by Indiana Public Media, cockroaches are composters. They break down decomposing matter as they eat it. This can benefit your plants, giving them the nutrients they need to grow faster. Their bodies do this because they contain the protozoa and bacteria needed to convert waste into nutrients.

Cockroach waste is also an excellent nutrient for plants. Mulch that’s made from decaying wood and other rotting materials traps nitrogen. As soon as cockroaches eat these materials, they release nitrogen by excreting it out. This nourishes plants and trees.

Leaving a few cockroaches in your mulch is beneficial. Wood cockroaches are the best kind for this scenario. However, they do wander into homes, so you must keep your mulch a safe distance from your home.

Another benefit is that once cockroaches die, they decompose, degrading within 1-3 days. As they rot, their bodies release nutrients, water, and energy back into the ecosystem. As a result, they can help fortify the mulch pile as they die. Even if you plan to eliminate the pests, leave their dead bodies amongst the mulch.

Having cockroaches in your mulch is troublesome and annoying to deal with. But the good news is that there are several types of mulch you can use in your yard that cockroaches are repelled by. This means that you can lay them in your garden without fear of infestation. Cockroach repellent mulch varieties include:

Cockroaches hate cedar. Mulch made from cedar repel roaches and prevent them from making themselves at home. Cedarwood contains natural oils and chemicals, including thujone, that cockroaches don’t like. It also deters termites, moths, carpet beetles, and ants, so it has far-reaching benefits.

Cedarwood doesn’t just keep cockroaches away and repel them for good, but it disturbs their pheromones, preventing them from mating, searching for food, and letting other cockroaches know to join them. Pheromones are one of the main ways cockroaches communicate with the rest of their colony.

Spread it around your garden to discourage cockroaches from setting up home within your garden.

Cypress mulch is similar to cedar mulch. Cockroaches don’t like it, so they won’t even go near it, let alone making it their home. Cypress oil occurs naturally in Mediterranean trees, which is a natural insect repellent. It’s excellent for use around the house – spraying a diluted version keeps roaches away.

According to the Journal of Economic Entomology, researchers found that Asian cockroaches preferred cypress mulch the least, making it a great option.

One of the most significant benefits of cypress mulch is that it’s resistant to decay, so it lasts longer than many other mulch varieties. While this does mean the nutrients don’t go back into the soil, it does ensure that your mulch won’t get overrun with pests.

Also known as reflective mulch, plastic mulch keeps cockroaches away by repelling them with light reflection. It’s made with reflective materials, such as aluminum or silver polyethylene, which reflects light up onto the leaves of plants. There are two different types of plastic mulch:

However, it does trap heat and moisture, so it’s not the most fool-proof method against cockroaches if you don’t install and use it properly. It can be a good temporary measure, though.

Rubber mulch is a good choice for keeping cockroaches away because it doesn’t provide them with the food they need to survive. Instead, it gives your garden a layer of protection against cockroaches, leaving them with no reason to invade.

Rubber mulch also doesn’t need replacing as much as wood chips and other organic materials and can last as long as ten years. But while it lasts longer, it doesn’t add organic matter to the soil. This is a trade-off you’ll need to think about if you’re worried about cockroaches.

One thing to bear in mind is that rubber mulch isn’t the most effective against female and nymphal Asian cockroaches. Other mulches are better against those species.

Cocoa bean shell mulch keeps cockroaches away from your garden. Not only does it emit a sweet chocolate scent, but the cocoa bean shell aroma repels roaches who don’t like the smell. It can also help keep other bugs away. However, it’s not the best mulch if you have dogs, as chocolate is toxic to them.

It breaks down much quicker than other mulches, so cockroaches don’t always get the opportunity to make themselves home.

Tea tree mulch is leftover from tea tree from the oil-making process. As a result, it’s a natural insect repellent that’s highly effective against cockroaches. Cockroaches hate tea tree, as it’s potent enough to keep them away and kills them on contact. If they come into contact with tea tree mulch, it’ll eventually destroy the colony.

When you use tea tree oil in your garden, it’ll emit a pleasing scent. It also looks great, so you won’t have to compromise on the overall aesthetic of your outdoor space.

How Do I Get Rid of Roaches in My Mulch?

If you have cockroaches in your mulch, it’s only natural you’ll want to get rid of them as quickly and efficiently as you can. It’s not the easiest thing to do, but taking these steps should help:

Don’t lay your much any thicker than 3-4 inches. As we’ve already explained, the water stagnates if it’s too thick, providing cockroaches with the moisture they need to thrive. However, if you keep it thin enough, the water soaks through to the ground quickly. This minimizes the risk of cockroaches calling your mulch their home.

Keep Away from the Home

Lay your mulch at least 12 inches away from the foundations of your home. This will discourage cockroaches from entering your home. Even though removing cockroaches from mulch is a complex and tricky process, eradicating them from your home is even more difficult. It’s also more stressful and distressing for homeowners.

In some cases, the only way to remove cockroaches from your mulch is to switch it to a different material altogether. Before you do this, try to find out what kind of cockroaches are lurking in your garden and choose the mulch they’re not attracted to.

If you’re unsure or have a significant cockroach infestation, use an inorganic type of mulch, such as rubber tires or pebbles. However, bear in mind that they don’t break down and add organic matter to the soil like organic mulch does.

Don’t overwater your plants or use sprinklers too often. While doing so benefits your plants, it also provides moisture and warmth for cockroaches, giving them no reason to leave. Much of the moisture can remain stagnant underneath the mulch.

Cockroaches can live without food for far longer than they can live without water, giving them the perfect conditions to thrive and multiply. To prevent this, only water your plants when they need hydrating and be careful not to go overboard.

Food-grade diatomaceous earth is safe to use around plants and pets. In fact, it’s the safest method of pest control to use around greenery. It doesn’t just keep cockroaches away, but all different kinds of bugs and insects, including termites.

Diatomaceous earth dries out cockroaches. The powder is so fine that it scratches the cockroach’s exoskeleton, drawing out the moisture, fats, and oils. Eventually, the pest dehydrates to death.

If you need your mulch to provide organic matter to the soil, try using diatomaceous earth to deal with the cockroach problem instead of stitching out your mulch.

Cockroaches invading your mulch can be a big problem if you leave them to breed and multiply. Before long, you’ll end up with a large-scale infestation that’s difficult to control. Using a mulch variety they hate is the easiest way to repel them, but you should also think about the benefits roaches can bring before eradicating them.