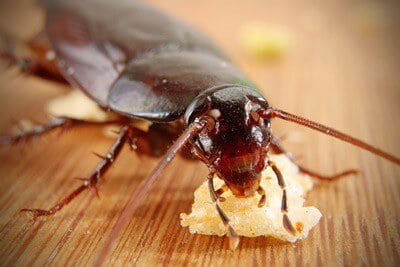 Cockroaches can sprint up to 50 body lengths a second, or about 3 miles per hour. The muscles in a cockroach’s back legs enable it to angle its body upwards, so it’s more aerodynamic. While those muscles should assist a cockroach in jumping, they lack the precise muscle control to execute a jump with their legs alone.

Cockroaches lack any natural jumping ability. Instead, they use their wings to lift them off the ground to assist their legs to leap forward. Depending on the species, this jump has little coordination and accuracy. Unlike crickets, the horizontal leaps of cockroaches are superior to their vertical leaps.

The only type of cockroach found to jump using just its legs is the Saltoblattella montistabularis. It’s more commonly called the leaproach, and with good reason. This species can only be found in a shrubland habitat in South Africa. Discovered in 2009, it has shed light on why cockroaches have wings, even if they don’t always fly.

How Do Roaches Jump?

As mentioned, to circumvent the jumping problem, cockroaches use their wings to help them leap. Instead of flying, the cockroach will use its wings to flutter into the air while it pushes off with its legs. This quick boost can give a cockroach the ability to jump up to 50 body lengths in a single bound.

However, when a cockroach flings itself forward, it never truly knows where it’ll land. The cockroach is all power and no aim. Because of this, most cockroaches will run instead.

Flying is a useful attribute, but cockroaches don’t have the best coordination in the air. They reserve their ability to jump or fly when they:

Just one species of cockroach is known to jump using its legs alone. Known as the leaproach, its scientific name is Saltoblattella montistabularis.

A group of researchers from the University of Cambridge observed it in 2009. It can only be found at Silvermine Nature Reserve on Table Mountain in South Africa. The leaproach is similar in appearance to the grasshoppers that share its habitat. The hind legs of a leaproach make up:

These back legs are more than twice as long as their other legs. The joints of the hind legs (the femoro-tibial joint, to be specific) have resilin. This is an elastic protein that enables leaproaches to jump the way they do.

They also have large, bulging eyes, which are different from the average cockroach. It’s theorized that their large eyes give leaproaches better vision, allowing them to see where they land more easily than other species.

Adult German cockroaches belong to the same family as leaproaches. However, they possess hind legs that are the same size as their body. In contrast, grasshopper nymphs have hind legs that are nearly 4 times the length of their other legs. Leaproaches have clearly evolved to thrive in their habitat.

Why Are Leaproaches Good Jumpers?

Like grasshoppers, leaproaches developed long legs so they could be good jumpers. It was the best way forward in their environment, so they adapted.

Because of their size, leaproaches have more muscles on their hind legs that assist them in jumping. The tibiae muscles are what power the jumps. The tibiae fully engage with the femora as the leaproach prepares to bound forward.

These muscles and joints come together to exert force. However, it’s through the elastic resilin protein between the tibiae and the femora that leaproaches jump as high as they do.

For other cockroaches, their legs are too short and lack the same motor functions as leaproaches. They lack resilin between their joints. If they had well-developed wings or even better-developed legs, they would be able to out-hop locusts.

Do Leaproaches Use Wings To Jump?

Leaproaches don’t have wings. They’re not necessary for them to escape danger and go about their daily lives. Jumping accounts for 71% of their locomotive activity. This allows them to keep up with any grasshoppers that share their living environment.

Prioritizing the hind legs for mobility ensures they have a means of escape. From an evolutionary standpoint, they don’t need wings. Their ability to jump helps keep them alive.

Meanwhile, other cockroaches have wings despite not using them because it’s evolutionarily advantageous. Their legs have developed to prioritize speed over jumping. Their wings operate as a last-ditch survival mechanism.

The leaproach inhabits the same areas as grasshoppers, and other cockroaches don’t. For this reason, they evolved differently.

What Cockroaches Can Jump?

The leaproach is only found in one specific part of South Africa. As such, most people will never encounter a true jumping cockroach.

Cockroaches may ‘appear’ to use their wings to leap at you. In reality, it’s because they’re not good at flying and find it difficult to direct their bodies.

How Far Can Cockroaches Jump?

When propelling itself horizontally, the average cockroach can jump 50 times its body length. That’s the equivalent of 5-6 feet. In some cases, cockroaches have been known to jump even farther.

The leaproach has longer hind legs, which allows it to jump without wings. However, the average cockroach still outperforms the leaproach when it comes to jumping distance. After all, wings allow them to glide, adding distance even if it isn’t technically jumping.

The maximum forward distance covered by a leaproach in a lab setting was 48 times its body length. They can also leap at impressive speeds. A cockroach will close that distance in less than a second.

How High Can Cockroaches Jump?

For leaproaches, males can usually jump higher than females. They achieve an 11.6 + 2.7-centimeter horizontal jump, while females have a 9.5 + 2.4-centimeter jump.

How high the average cockroach can jump is unconfirmed. Cockroaches mostly use their wings to glide. As such, gaining height isn’t their strong suit. They rely on casting off from a lofty position or gliding low to the ground.

Baby roaches can’t jump as they don’t yet have developed wings. To become adults, cockroaches have to go through molting cycles. Here, they shed their hard exoskeleton and grow in size.

It varies by species, but the average cockroach will molt 6 times to reach adulthood. Nymphs don’t develop wings until their final molt, which is when they become adults. They’re unable to jump or glide until they’re fully matured.

Cockroaches have a movement similar to a jump, but it’s not really jumping. Also, they’re unable to target surfaces to land. Their jumps are badly coordinated. They’ll only utilize this maneuver if they can’t easily run away.