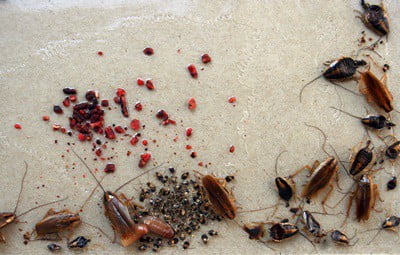 Most cockroaches don’t give birth in the traditional sense. It takes roughly 2 months for cockroaches to hatch. Cockroaches sometimes give birth while dying. This natural instinct protects the young and ensures the continuation of the genes and bloodline.

Cockroaches need a male and female to reproduce. However, the birthing process varies between the different roach species. Cockroaches lay their eggs in a tiny sac called an ootheca. Depending on the cockroach species, they either carry the sacs on their abdomens or deposit them somewhere warm and safe from harm.

Madagascar hissing cockroaches carry the ootheca inside their bodies. When their offspring hatch, they emerge from inside the roach, making it appear like a live birth. Diploptera punctata roaches give birth to live young, carrying them in their uterus and producing milk to feed them.

How Does a Cockroach Give Birth?

As mentioned, most female roaches don’t give birth. Instead, they lay tiny bean-shaped sacs containing their eggs called ootheca, which they lay around a week after mating. Each sac can hold up to 50 eggs or more at one time.

Cockroaches start reproducing as soon as they reach adulthood. According to Ecology Center, most cockroach species are oviparous, meaning their offspring grow outside the body. Roaches carrying eggs develop pill-shaped protrusions that stick out like a ribbed tail.

Depending on the species, the ootheca either attaches to the roach’s abdomen or gets deposited in a warm, dark place where it’s safe from predators. Some roaches, including the Madagascar hissing cockroach, are ovoviviparous. This means they give birth to live young after growing the ootheca inside them.

It takes around 6-8 weeks for the nymphs to emerge from the ootheca. They start their lives white but turn brown as they get older and molt.

The exception to this rule is Diploptera punctata (Pacific beetle) roaches, which are viviparous. They have a traditional live birth, where baby roaches grow inside a uterus, receiving sustenance from the mother. The Society for Integrative and Comparative Biology explains how they produce milk that’s protein-based and high in calories.

How Long Does It Take a Cockroach to Give Birth?

Most pregnant females develop the eggs inside her for around one month until the eggs are ready to be deposited in an ootheca. She’s considered pregnant throughout the process, but the gestation period varies depending on the cockroach species.

How Long Does It Take for Cockroach Eggs to Hatch?

Once the ootheca has been deposited, it takes a little while for them to hatch. The following is the average hatching time and number of nymphs produced for the most common cockroach species:

Every ootheca differs depending on the cockroach species. The following are descriptions of what the ootheca should look like, allowing you to keep an eye out on the types of cockroaches you may have in your home:

Cockroach eggs are made from a similar substance to a roach’s exoskeleton. It comes out soft but quickly hardens to protect the roaches inside.

Can a Cockroach Give Birth While Dying?

Cockroaches frequently give birth while dying, making it difficult to eradicate roach infestations. The reason for this behavior is because mother cockroaches quickly expel their eggs when threatened, giving the nymphs a chance to continue the family bloodline.

This adaptation is what makes roaches so good at surviving. There’s also a famous video showing a cockroach laying its eggs while dying from being devoured alive by fire ants. Unfortunately for the nymphs, they were also swiftly killed and eaten by the ants.

Eggs can also hatch inside a dead cockroach if they remain alive. Depending on how close the nymphs are to hatching, they can break free from the ootheca and emerge from the mother’s body. This isn’t common, but it depends on the circumstances of the female’s death and how long the eggs had been developing.

Frustratingly, while insecticides kill live roaches, they don’t always kill the eggs. That’s why you must use pest control methods consistently to destroy the entire colony.

How To Tell if a Cockroach Is Giving Birth

You’ll be able to tell if a cockroach is carrying eggs because it’ll have a long brown bean behind it, which looks like a ribbed purse attached to the roach. It protrudes from the abdomen until the female deposits the ootheca.

Unfortunately, because the time frame is so short between a cockroach becoming pregnant and depositing the eggs somewhere safe, you’re not likely to see a pregnant roach. Similarly, you’ll rarely see a cockroach laying her eggs because of how adaptable she is at finding somewhere safe to deposit them. However, signs that a cockroach has recently given birth include:

Cockroaches giving birth prefer to remain close to food, water, and warmth, so you’ll most likely find them in kitchens and bathrooms, down the backs of cupboards where they can’t be seen. The ootheca has to stay moist for the eggs to develop, so living near water is essential.

Cockroaches have developed a range of impressive adaptations that have kept them alive for so long. Their birthing methods are one of them. Oothecae casings enable nymphs to remain protected from dangers, including predators and pesticides, making them difficult to kill.