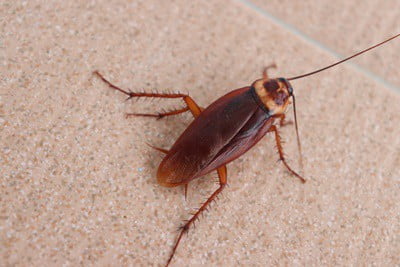 Even though cockroaches are unwelcome pests that spread illness and disease, they’ve been around for millions of years, long before man. But how were cockroaches created?

Cockroaches are evolving to resist pesticides, meaning they’re more difficult than ever to kill. To cope with future infestations, we must integrate new pest control methods into our lives.

Where Did Cockroaches Originate From?

Cockroaches are older than you might think. They come from the Carboniferous period, which occurred approximately 300-350 million years ago.

According to Science Daily, researchers performed the first molecular dating to trace back the key evolutionary time points of the early cockroach. The first origins date back 300 million years when the Earth’s mass was organized into the Pangaea supercontinent.

Paleontologists also discovered four new species of Ectobius cockroaches that are 5 million years older than scientists first thought. They didn’t originate in Europe and Africa (the Old World) as once thought, but in North America (the New World).

They likely migrated from the continent and the Rocky mountains either through the Arctic into Scandinavia or across the Bering Land Bridge into Eurasia.

In case you’re wondering, the name “cockroach” derives from the Spanish term “cucaracha.” Over time, slang changed the word from “cuc-a-racha” to “cockroach.”

What Did Roaches Evolve From?

Cockroaches are members of the order Blattodea. Three main cockroach groups form the bottom subgroups of the order, including:

The order Blattodea also includes termites, which were once thought to be different from cockroaches. Also, because of their wings, cockroaches in the Niticolidae group are believed to be relatives of the extinct order Mimoptera, which are common ancestors of many of today’s living insects.

Fossil roachoids that existed millions of years ago differ from modern-day cockroaches. For example, ancient cockroaches had long external ovipositors, a tube-like organ used for laying eggs. They’re also the ancestors of mantises as well as modern cockroaches. Unfortunately, the body, mouthparts, and hind wings haven’t been preserved in fossils, so no one knows how they differ.

Fossil records suggest that cockroaches in existence today evolved during the breakup of Pangaea, which began ~200 Ma, and before the start of continental separation within Gondwana, which occurred ~135 Ma. This means that existing cockroach families have evolved over periods of up to ~180 million years.

By reconstructing the ancestral distribution of cockroaches, researchers have found evidence that the breakup of the continent has had a significant impact on cockroach biogeography.

According to one hypothesis scientists have come up with, cockroaches were an ancient group of insects that evolved during the Devonian epoch. However, this hasn’t yet been fully proven, so there’s still a lot to learn about the evolution of cockroaches.

Cockroaches have been roaming the Earth alongside some of the planet’s very first insects. While there’s no proven origin, scientists know that they come from the world’s tropical regions but have since adapted to chillier climates.

Because cockroaches lived millions of years before humans first appeared, there’s no physical way that we had anything to do with their existence. However, we are helping them evolve by living in the same environment, providing new foods for them to eat, and using insecticides to kill them.

It might surprise you to know that the evolution of cockroaches is constantly ongoing, giving way to a new “superbug” that’s far stronger than its ancestors.

According to Scientific Reports, German cockroaches are becoming more averse to glucose used in bait traps. So much so, they’re actively avoiding them and becoming pickier about the foods they eat.

Cockroaches are also becoming immune to pesticides. Researchers have discovered that insecticide resistance has occurred to every insecticide since the 1950s, making it more difficult to eradicate the pests.

As 85% of inner-city homes in the US test positive for cockroach allergens, this is worrying, posing a risk to human health. Similarly, between 60-93% of inner-city US children with asthma are sensitized to cockroaches.

Not only that, but cockroaches are even able to resist pesticides they’ve never come into contact with before, making it almost impossible to get rid of them. Within a generation, they could evolve to have complete resistance, increasing their populations significantly.

If this continues, people will need to adopt “integrated pest management,” which involves laying traps, cleaning debris off all sides, and vacuuming them up.

How Have Cockroaches Survived?

Cockroaches have been around for millions of years because of their impressive ability to survive. This is due to several characteristics, including:

Cockroaches are highly adaptable. For example, American cockroaches have immunity genes that have enabled them to survive unsanitary environments and fermenting food sources – and continue to do so today. They developed these traits long before humans arrived on the scene, meaning their ability to survive has been largely unaffected by our presence on Earth.

Cockroaches have also adapted to the changes of the Earth and its inhabitants over millions of years. They even use human dwellings and environments to their advantage, which provide them with shelter, food, warmth, and moisture.

According to Live Science, cockroaches, particularly German roaches, have larger genomes related to taste and smell than most other insects, second only to the migratory locust. This allows them to avoid eating toxic substances. They can also metabolize nasty substances better than other creatures, enabling them to stay alive for longer.

Cockroaches can also eat anything. While they prefer starch, grease, meat, and sweets, they’ll eat leather, glue, wallpaper paste, dried skin, hair, and decaying matter. They have gut bacteria that allow them to digest cellulose, meaning they can eat most organic matter.

Cockroaches have learned to remain hidden during the day and come out at night searching for food and water. Doing so enables them to breed and multiply rapidly before humans even know they’re around.

Using the cover of darkness protects them from predators and other dangers. That’s why you’ll only see a cockroach during the day if the population is too large and the cockroaches are forced to compete for food.

After cockroaches have mated, the female develops the eggs inside her for a short time and lays them in an ootheca. This is a sac that keeps them protected until they’re ready to hatch. When the offspring are ready, they break out of the casing, where they’re considered nymphs.

Each ootheca contains up to 40 eggs, which results in 400 offspring in one year, depending on the cockroach species. It then doesn’t take long for the nymphs to mature, where they can mate and produce their own offspring, ensuring the survival of their colony.

Cockroaches are only small, so they’re able to get through the smallest nooks and crannies. They can also get into dwellings by crawling under door and window gaps and cracks in walls.

When they’re inside a building, they hide under refrigerators, behind cabinets, and in drains. Not only does it provide them easy access to food, water, and shelter, but it keeps them safe.

There are many different cockroach species that all need different things to survive. Some prefer to live in sewers and drains, while others like to be outside amongst mulch and leaf piles. This means they don’t compete for resources and can survive within their own populations.

Cockroaches have successfully survived millions of years, and it doesn’t look as if they’re going anywhere any time soon. While this is bad news for humans, particularly those that own their own homes, there’s no denying the impressive survival abilities of cockroaches.