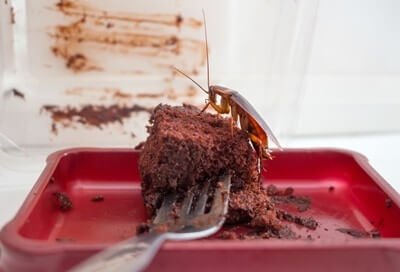 Chocolate is a popular treat that many people really enjoy. So, it would likely horrify you to know that there are fragments of cockroaches in your favorite candy bars.

Cockroach traces are found in chocolate. The FDA’s guidelines state that it’s legal for chocolate to contain up to 60 insect fragments per 100g. While chocolate brands don’t add roaches to their recipes, cockroaches and other bugs are present during the manufacturing process, and removing them is impossible.

However, don’t throw away the chocolate. You won’t find roach wings and legs while you’re eating your chocolate bar. Only the tiniest traces are present in chocolate, and even then, you won’t even be able to see or taste them.

Does Chocolate Have Cockroaches in It?

If you’re wondering, “are there really cockroaches in chocolate bars?” – the real answer is yes, sometimes. While this isn’t a pleasant thought, it’s not quite as horrific as it may first seem.

On average, there are around 8 insect pieces in every chocolate bar, which works out at about 4% of the entire chocolate mass.

This figure includes a mixture of roaches and other bugs – it’s impossible to say for certain which insects are present in each chocolate bar. A study by Terro believes that the average person consumes 5,988 insect fragments each year from chocolate alone.

However, it’s not just chocolate that has cockroach fragments in it. Anything that a production facility creates could end up with roach parts in the end product. It’s just a part of life.

How Do Cockroaches Get into Chocolate?

Cockroaches aren’t intentionally added to chocolate to save money on ingredients. They’re a natural part of the manufacturing process, during which cockroaches and other bugs are always present.

Around 70% of the world’s cocoa is produced from four West African countries, including the Ivory Coast, Ghana, Nigeria, and Cameroon, where cocoa beans start life as cacao plants that grow on farms. While growing, the plants are attacked by roaches, mites, and other pests that feed off them.

Cocoa farmers in these areas don’t always have access to sophisticated tools to separate pests from the crops. This means that roaches that are native to these regions sometimes fall into the process vessels during the processing stage and get mixed up with the cocoa.

However, this is rare. The pods from the cacao trees are fermented through aerobic and anaerobic respiration. This process is enough to kill most insects and bugs.

The beans then go through a sun-drying and roasting process, which removes most roaches and insects that have survived. During all phases of chocolate production, every part of the chocolate is cleaned and sorted.

As a result, it’s unlikely that cockroach fragments would even get through to your chocolate bar. Though, it is a possibility – and that’s why roaches and other creatures are considered an unavoidable defect.

You won’t find whole cockroaches in your chocolate, but there may be body parts that have been crushed and ground into tiny fragments that the naked eye can’t see. You won’t be able to taste them, either.

Does The FDA Allow Cockroaches In Chocolate?

The Food and Drug Administration (FDA) is responsible for protecting public health. It does this by ensuring the safety of the United States’ food supply.   Perhaps surprisingly, the FDA allows cockroaches to be used in chocolate. The authoritative body deems anything less than 60 insect pieces per 100g of chocolate safe for the public to consume.

For context, 100g is around two average-sized chocolate bars. Chocolate containing any more insect fragments than stated is against regulations and won’t be approved for human consumption.

Furthermore, under FDA guidelines, traces of cockroach parts are legally allowed and are considered natural contaminants. The FDA doesn’t state how small these fragments are allowed to be, but it’s improbable you’d find a whole cockroach body part in your chocolate bar.

Reassuringly, however, only unavoidable cockroach traces that pose no harm to health are allowed. The FDA’s guidelines are set out on the premise that there is no risk of illness or disease when humans consume products containing cockroaches.

Can Cockroach Traces in Chocolate Trigger An Allergy?

If you have a chocolate allergy, it’s understandable that cocoa would get the blame. However, it might not be the chocolate but the cockroach fragments in it that are causing the problem.

Cockroach contamination is prevalent in all chocolate brands. Removing them would require heavier pesticide use, which is even more harmful to your health than the cockroach parts.

Pesticides also cause more damage to the environment, killing plants and wildlife. This is why they’re not more commonly used. People with roach allergies may experience the following symptoms after eating chocolate:

Cockroaches don’t cause asthma. According to the American College of Allergy, Asthma, and Immunology, their saliva, feces, and shedding body parts can trigger the condition, along with asthma attacks.

To prevent symptoms caused by cockroach consumption, you’d have to stop eating chocolate altogether. The problem is that it’s almost impossible to remove cockroach traces from your diet. Cockroaches are in many other foods, including peanut butter, macaroni, fruits, cheese, and cereal.

Because the traces are so minimal, they shouldn’t cause any harm. If they did, the FDA wouldn’t allow it. Similarly, if you had an allergy to roaches, you’d react to most foods you eat. If you only get allergic reactions after enjoying a bar of chocolate, it’s more likely to be due to an ingredient.

However, if you experience allergic reactions and can’t find the ingredient triggering it, seek advice from your doctor, who will investigate further and attempt to find the cause.

Vegetarians who were previously unaware that there are cockroach traces in chocolate, peanut butter, and coffee face a moral dilemma on whether to continue to eat it or not.

Cockroaches and all other insects are living beings, and, as such, most vegetarians refuse to eat them. This isn’t always because of ethical reasons – the thought of eating cockroaches is repulsive to many people.

However, the labeling of vegetarian chocolate covers products that don’t intentionally include animal products. Because cockroaches aren’t added to chocolate purposefully, they’re not included as part of the listed ingredients found on chocolate packaging.

Also, not all chocolate contains cockroaches or insect traces. It’s possible that roaches and other bugs could become part of the manufacturing process, but it’s not guaranteed. Some batches may not contain cockroaches at all.

The reality is, it’s impossible to tell whether roach traces are present without thorough scientific testing, which isn’t feasible both in terms of the cost and the scale of testing that would be needed.

Insect traces are a possibility in almost all foods, including vegan-friendly organic fruits and vegetables. If vegetarians and vegans let their concerns about potential traces of animal products in their food stop them, they wouldn’t eat at all. Therefore, most chocolate is still considered vegetarian and is labeled as such.

Are Cockroaches Good for You?

By now, you might be feeling quite repulsed by the reality that cockroaches are likely to be in your favorite sugary snack. But let’s try to put a positive spin on things by finding out whether cockroaches can be good for your health.

In Eastern parts of the world, including China, Vietnam, and Thailand, cockroaches are considered a street food delicacy and are usually served deep-fried on a stick. While this might not catch on everywhere, it’s reassuring to know that roaches are fit for human consumption.

The US National Library of Medicine describes how insects, including cockroaches, are rich in essential amino acids and unsaturated fatty acids. They’re also a good source of protein and can be compared to the protein contents of meat such as beef and pork.

Not only that, but cockroaches require less energy and space to grow than animals bred for food. In the long run, eating roaches is better for the environment.

Cockroaches are considered unsanitary creatures, but the production process is likely to kill off the harmful bacteria found on a cockroach’s body. This is why you can feel reassured that consuming the smallest roach traces won’t cause you any harm.

While all chocolate manufacturers follow procedures to keep their factories and manufacturing process as clean as possible, no chocolate brand can fully guarantee that cockroaches aren’t in their products.

However, cockroaches won’t be marked as an ingredient on the packaging as they’re not a considered part of the recipe. While milk and dark chocolate are most likely to contain traces of cockroaches, you’re safer eating white chocolate because it doesn’t contain any cocoa solids.

During the manufacturing process, the cocoa bean’s dark-colored solids are removed from the fatty content. Unlike milk and dark chocolate, it’s not added back into white chocolate. As a result, cocoa butter is the only cocoa ingredient of white chocolate.

This isn’t to say white chocolate won’t have roach traces, but they’re more likely to appear at a lower concentration than other chocolate bars.

The production process doesn’t vary much between chocolate brands, so even the big name brands, such as Cadbury’s and Hershey’s, aren’t safe from cockroach traces. Unfortunately, this means your favorite chocolate bars are just as likely to contain roach traces as any others, including Dairy Milk.

As mentioned, to avoid eating cockroach traces, you’d have to give up chocolate entirely. While this might be something you’re prepared to do, there are so many other foods containing bug traces that you’d only be eating them from another source.

Don’t think about it too much. Roach traces aren’t harmful and won’t make you ill unless you’re severely allergic. You can safely eat chocolate due to the manufacturing process but never eat food that’s been touched by roaches.