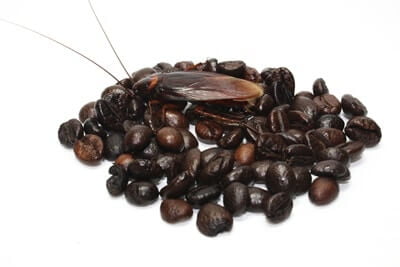 Many people can’t go without their morning cup of coffee. So, to discover that there may be cockroaches in your cup of Joe is enough to put anyone off ever drinking it again. But is it something you should worry about?

Cockroach fragments are found in coffee. They’re not added to coffee grounds, but they’re a natural pest of coffee plants, so they become part of the production process. They’re not large enough for humans to see or taste. Pre-ground coffee is most at risk, whereas whole beans may be less susceptible to cockroach fragments.

Before you ditch in coffee, bear in mind that cockroach fragments occur in a range of natural-grown foods. It’s impossible to remove them entirely from the production process, so don’t worry about it too much.

Are There Roaches in Coffee?

If you’re wondering, “are there ground-up cockroaches in coffee?” you might be horrified to know that coffee can be infested with cockroaches. As mentioned, FDA studies show that 10% of green coffee beans or more are infested or damaged by insects, including cockroaches. Unfortunately, it’s impossible to avoid this, so cockroaches become roasted alongside the coffee beans.

Similarly, Terro, an insect control company, believes that the average human consumes 136,080 insect fragments from drinking coffee each year. That being said, don’t expect to find whole cockroaches in your coffee. The fragments are so small that you won’t be able to see or taste them.

How Do Cockroaches Get into Coffee?

Cockroaches don’t get added to coffee – they occur naturally as part of the production process, where cockroaches and other bugs are always present. There are three central coffee-growing locations:

Cockroaches feast on freshly harvested coffee cherries. As a result, they get processed alongside the cherries as they’re dried and turned into coffee beans. Because of the sheer number of cherries harvested at one time, it’s impossible to separate the cockroaches from the crops.

Similarly, farmers in poorer regions don’t have the sophisticated tools needed to segregate cockroaches from their crops. That being said, the coffee process is extensive and includes:

Cockroaches are unlikely to survive the process and get destroyed or ground up before they even reach your cup.

Does The FDA Allow Cockroaches In Coffee?

The Food and Drug Administration (FDA) protects public health by ensuring the safety of the food supply in the United States. As a result, the organization doesn’t allow contaminated food to enter the supply chain. So, it might surprise you that the FDA allows a certain percentage of cockroaches to be in coffee, which is labeled as “unavoidable defects in food.”

Under official guidelines, cockroaches are legally allowed in coffee as natural contaminants. This is because it’s economically unviable to grow, harvest, and process raw products that don’t contain bugs and insects.

However, if the roach traces are too high, the FDA won’t approve the products as fit for human consumption. That’s why you’ll only find cockroach traces in your coffee – if there are any at all. Similarly, you’re unlikely to ever find an entire cockroach in your coffee because of the intensive production process, as we’ve explained.

Because the FDA only allows a small number of roach fragments to enter your coffee, they pose no threat to human health, and there’s no risk of human disease or illness as a result of drinking contaminated coffee unless you’re severely allergic to them.

Can Cockroaches in Coffee Trigger An Allergy?

Asthma attacks are a common side effect of coming into contact with cockroaches. However, roaches aren’t the cause of asthma. According to the American College of Allergy, Asthma, and Immunology, it’s their saliva, feces, and shedding parts that trigger the condition.

It’s possible to reduce the likelihood of cockroaches by using heavier pesticides on coffee plants, but this is even more harmful to your health than cockroach traces found in coffee. Pesticides are also toxic to the environment, killing wildlife and plants.

The only other way to prevent cockroach consumption is to give up coffee altogether. However, because cockroaches are in so many different foods, including chocolate, peanut butter, cheese, and various cereals, it’s impossible to eliminate them, meaning it’s not worth the trouble of removing coffee from your diet.

If you get a reaction after drinking coffee, you may be allergic to something else in your drink, such as milk or cream.

By now, you’re probably wondering which types of coffee are most likely to be contaminated with cockroaches. Most coffee manufacturers work hard to ensure their coffee beans are as clean as possible, but roach fragments are almost impossible to remove. So, here’s how your favorite coffee varieties fare:

Does Whole Bean Coffee Have Cockroaches?

Whole bean coffee leaves the griding process to the buyer, giving your coffee a fresher, more complex flavor. They’re unlikely to contain cockroaches because they’re selected and roasted separately, going through a more rigorous process than the coffee that ends up being ground.

You can also clean and check the whole beans yourself before you grind them. However, bear in mind that it’s impossible to know for sure whether coffee contains cockroaches or not, so there’s always a chance of roach fragments.

Pre-ground coffee isn’t processed beyond the washing and roasting process before it’s packaged and sent to a coffee shop, where it naturally deteriorates. As a result, it’s more likely to contain cockroach fragments because it’s not as processed as instant coffee. Similarly, it’s processed from large stockpiles that are prone to cockroach infestations.

However, as we’ve already mentioned, coffee can only contain a small percentage of cockroaches, so you needn’t worry about there being too many roaches in your drink.

Ground coffee is fresher than most other kinds, but, again, this doesn’t necessarily mean it’s free from cockroaches. The reality is, there’s no real way to tell whether there are cockroaches in your brew, but it’s safe to assume it’s likely.

The good news is that ground coffee goes through slightly more processes than pre-ground coffee, so there are greater opportunities for cockroach fragments to get processed out.

Nescafe is a well-known brand, but it’s not immune to having cockroaches in its products. The truth is, coffee comes from the same primary regions, so if one brand of coffee’s infested with cockroaches, chances are they all will be.

Are There Cockroaches in Starbucks Coffee?

The same principles apply to Starbucks. Even though it’s seen as a premium coffee brand, Starbucks’ coffee supplies originate from the same places, meaning cockroaches are always present, causing a contamination risk.

Not only that, but Starbucks uses cochineal extract in their drinks, which is a common reddish-pink dye made from ground-up insects.

What Bugs Are in Coffee?

Cockroaches aren’t the only bugs you need to watch out for in coffee. Depending on what insects are native to the regions coffee’s grown in, your coffee could be contaminated with:

Out of all of these bugs, coffee borer beetles are the most invasive kind. They’re so tiny, they’re able to burrow inside the cherries, where they remain protected. This makes them difficult to kill with pesticides.

Even though having cockroaches in your coffee is a horrifying thought, it’s far more common than you think. However, given that coffee’s grown in a natural environment, it’s a normal part of life. You should also be aware that cockroaches are attracted to coffee machines, even though they dislike the smell.