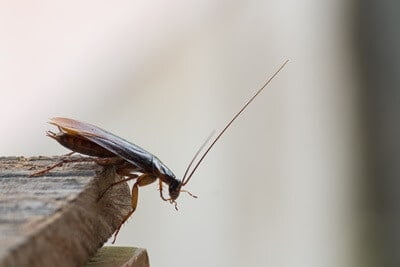 Cockroaches love climbing and running on high surfaces like tables, walls, ceilings, and posts. They run unfazed by their distance from the ground. Falls do happen, and cockroaches may come crashing to the floor. When they do, most will spring right back up and run away. That can leave you to wonder if cockroaches take fall damage.

Cockroaches don’t sustain damage when they fall from a height. That’s because they’re very small in size and weigh very little. So, they don’t fall fast enough to hit the ground with enough force to cause injury. This is true no matter the height they fall from or how hard the surface they fall on.

Additionally, their small surface areas give cockroaches low air resistance, which also slows the speed of their falls. Even from hundreds of feet, this gives them a surviving chance. Let’s take a closer look at the various mathematical calculations, physics, and biological theories.

Can Cockroaches Die from Falling?

Cockroaches don’t get injured, let alone die, from falling. That’s irrespective of the height they fall from. This is mostly due to their small sizes and low air resistance.

It also helps that most cockroach species (American, Oriental, and German roaches, in particular) have wings and can fly whenever their lives are threatened.

Although they lack coordination, these appendages are designed specifically for this purpose. When a misstep sends roaches crashing down, they can spread their wings and catch air, slowing their fall or even gliding down to the floor.

With that said, not all cockroaches have wings. Therefore, not all of them can avoid landing on the ground at maximum speed. Even these cockroaches can survive the fall without injury.

Of course, while most cockroaches can survive even the largest falls, certain factors can considerably decrease the chances of survival. These include:

This is a mathematical principle put forward by the great polymath, Galileo Galilei. It essentially states that as an object’s size grows, the increase in its volume will be larger than that of its surface area.

Let’s say, for instance, that we have a cockroach that’s 1 inch long. According to WHO, most cockroaches are 1-2 inches long. If we increase its length to 3.5 inches (the maximum a cockroach can attain), its surface area will be 3.5 times bigger. On the other hand, its volume will be 35 times larger.

The smaller a cockroach is, the higher its chances of surviving a fall. That’s because its weight and volume are also small. A 2-3 inch-long cockroach will be heavier and hit the ground with much more force. This means it will more likely suffer damage, albeit minor.

Cockroaches rarely grow to more than 1.5 inches. As such, almost all cockroaches will not have enough weight to properly injure themselves with a fall.

Most cockroaches fall on the ground or floor, having crawled along your ceiling or another tall surface. As such, most studies focus on how a cockroach will survive landing on that type of surface. Do the roach’s chances of survival go down if it falls on and in water?

Cockroaches can survive falling on water, but not due to water being a “soft surface,” as you might imagine. Instead, a cockroach’s low terminal velocity and mass mean that the water’s surface tension doesn’t hurt it as much. That’s especially true in contrast to bigger animals, even from very high falls.

Of course, surviving the landing is one thing, while leaving the water body safely is another. Cockroaches can hold their breath for up to 40 minutes. This means they can swim their way through shallow ponds, ditches, and water basins if they happen to fall in them. However, they will easily die if they land in an ocean or fast-moving river.

The chances of being submerged multiple times are far higher in larger water bodies. There’s little oxygen in the water. Since roaches lack gills to regulate air that gets into their bodies, they can’t survive in water for more than an hour.

Additionally, cockroaches are highly sensitive to increases in water temperature. According to the Phoenix Department of Health, Education, and Welfare, they cannot withstand temperatures above 100 degrees Fahrenheit for more than a few minutes at a time. So, again, if a cockroach falls on warm or hot water, it will die.

The majority of cockroaches are small in size and mass. Therefore, they will not experience any damage from falling, irrespective of the height. Nonetheless, larger roaches are most likely to sustain some form of injury when they land on hard surfaces. In rare cases, these large roaches can even die if they fall from high enough.

Let’s further explore the extremely low chances of roaches taking fall damage. To do so, we’ll look at three theories or principles that span the subjects of physics and biology. These are:

In physics, terminal velocity is the maximum speed that an object falling through the air (or fluid) can attain.

An object will typically keep accelerating as it falls until it reaches a point where its innate air resistance (or drag force) is equal to the force of gravity acting on it. When this happens, the object stops accelerating and instead falls at a constant speed. This is what’s known as the terminal or settling velocity.

Cockroaches, which never weigh beyond 30g, have minuscule terminal velocities and fall at relatively low speeds. Combining these two factors (low mass and speed) means that they don’t hit the ground with much force. Therefore, they can brush off the effects and walk away as if nothing happened.

Momentum is a term used in physics to describe how fast a given object moves in a certain direction. It is a product of mass and velocity. This means that the larger the object’s mass, the higher its momentum will be at any given speed. Likewise, the higher the momentum, the larger the landing impact will be.

As established, cockroaches are very light and have extremely low terminal velocity. Consequently, their momentum is just as low. This means that no matter where they fall from, roaches won’t crash to the ground (or whatever surface they land on) with enough force to cause injury.

Cockroaches have an oval shape. If you were to look at their bodies, they fit the basic definition of a cylinder. So, unlike humans and other larger animals that typically fall head-first (or nose-dive), roaches fall flat, often on their backs.

This body part is covered in a thick shell and often padded with wings, even if those wings are non-functional. The exoskeleton is hard enough to survive the impact of most falls. Meanwhile, the wings are leathery and provide cushioning to help the roach bounce back.

Furthermore, cockroaches have 3 pairs of legs, with each pair having its own nerves for coordination. During falls, these legs spread out, together with the wings. This, in turn, increases the roach’s air resistance and thus slows its falls. Skydivers and paratroopers do the same thing.

The short answer is that most cockroaches survive high falls. Many factors can increase or decrease the chances of survival. As such, there can be no sure answer. Some of these factors include:

The average cockroach will survive a fall from as high as the tallest building in the world. This is due to the reasons outlined above, as well as the updraft. Updrafts are the strong upward movement of warm and moist air from the ground.

While storms mostly cause this, updrafts are always present around tall buildings. This occurs because wind currents that hit the buildings from the sides have nowhere else to go but up.

So, if you drop a cockroach from a tall building, the building’s updraft will somewhat lift it. This effectively slows the fall. This, combined with the insect’s low terminal velocity and body mass, means it will survive.

However, if you drop the cockroach from a flying plane, it will likely die before reaching the ground. The ultra-low temperatures at cruising altitude not only deny the cockroach oxygen supply. They also cause ice crystal formations on its body, which damages the tissues.

Female roaches, especially pregnant ones, rarely survive high falls without injury. This is due to what some researchers claim to be their bloated body shapes and relatively higher mass.

No conclusive study has been performed, but empirical tests by entomologists support this hypothesis. After dropping nine cockroaches of different species from about 7.6 meters, 5 sustained damage, with 4 of them being female.

The slow speed at which cockroaches fall can make them vulnerable to predatory birds or even bats. This means it would be hard for a cockroach to survive a fall if it got grabbed mid-air.

Cockroaches can survive high falls and walk away unscathed. Even tumbling from your ceiling, a tall tree, or your roof is unlikely to kill a cockroach.