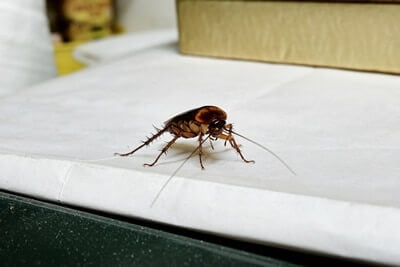 Male and female cockroaches can be identified by their body types and appendages. Females are usually larger than males (wider bodies) and have longer antennae. Their wings may not be functional and will lie dormant on their back. Males have long and broad wings, matched by their slender bodies.

Females have a divide at their sternum, while males don’t. In contrast, males will have styli between their cerci, and females don’t. These identifiers will enable you to distinguish between male and female cockroaches.

How to Tell Male and Female Cockroaches Apart

Here are the differences between male and female cockroaches:

Female cockroaches are usually larger because they need more space for their reproductive parts. They also need more room to carry their eggs before laying them in an ootheca.

If you see two cockroaches together and one is larger than the other, there are two possibilities:

To be sure, explore the other identifying features:

You can even tell some nymphs apart in their development stage by this indicator.

Depending on the species of cockroach, the male may be able to fly.

Male cockroaches have a longer wingspan than females. Their wings extend 4-8 mm. beyond the end of the abdomen. The wings on the male will be wider, covering more of the back.

For some species, the female will have very short and blunted wings. They may not spread out. Instead, they work as leathery shields for the back. This protects the female from harm rather than letting her take to the air.

Most cockroaches have a pair of slender, jointed cerci at the tip of their abdomen. The cerci are a pair of appendages resting near the end of the body. They’re segmented, and that’s where male and female cockroaches differ.

Male cockroaches have 18-19 segments in their cerci, while females have only 13-14 segments.

The styli are found between the cerci at the end of the abdomen.

Even among cockroaches, they’re used to determine who is male and who is female. Cockroaches use a combination of pheromones and styli to determine which mates are ready and able to breed.

Males have styli and females don’t. It may be a small difference, but it’s a way to tell the sex of cockroaches. For most people, it’ll be difficult to see these small appendages.

Across their entire bodies, cockroaches are broken into segments, just like at the cerci.

This makes their rigid exoskeleton more flexible and allows them to navigate more freely. In the seventh segment of the body, you can find a difference between males and females.

According to the Journal of Animal Behavior, cockroaches use their antennae to adapt and feel their surroundings. It’s one of the most important parts of their anatomy.

Male cockroaches have shorter antennae than females. This accounts for their smaller, stockier body size.

The females will have notably long, almost flowing antennae. This should make the difference easy to identify when you see a cockroach crawling around your home.

Female cockroaches organize in groups, while males tend to forage and explore alone.

If you see a group of cockroaches, the chances are that they’re all female. Females partly do this to deflect male advances. Any cockroaches found wandering alone or separated from the group are males.

Females don’t work together but merely ignore and tolerate each other’s presence as they travel.

The differences outlined above primarily apply to the American cockroach. With other types of cockroaches, the identifiers between males and females vary.

With German cockroaches, the male is more slender and smaller than the female.

Because German cockroaches are already the smallest of their kind, the size difference won’t be stark. However, the slender design of their bodies will enable you to tell them apart.

Females will be much broader. They’ll contain up to 40 eggs before depositing them into an ootheca.

For Oriental cockroaches, males have narrower bodies. Their wings are also more developed and longer than the females’. Despite having wings, neither sex are capable of flight.

In brown-banded cockroaches, males are longer than females due to their wingspan. However, males can fly when disturbed, while females can’t fly.

The female has shorter wings and a larger abdomen, which inhibits her ability to fly. The wings on a male will extend the full length of his body, making them a clear cockroach gender identifier.

Whether it’s parts of their bodies, wings, reproductive organs, or how they socialize, male and female cockroaches can be told apart. Check for the above identifiers so that you can find their eggs more easily.