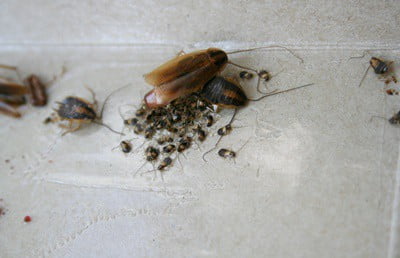 For the average colony, there’s an abundance of both sexes. This allows the female cockroach to reproduce sexually and produce 200-300 eggs in her lifetime. However, if a colony is wiped out, some roaches may become isolated. When a cockroach can’t find a mate, you may assume that the survivors die out, but that’s not the case.

Some cockroaches can reproduce without a mate, laying female-only eggs that haven’t been fertilized. This is accomplished through parthenogenesis, where the offspring comes from the mother’s cells alone. They’ll have less genetic diversity, so any eggs produced asexually will have a lower rate of survival.

Their offspring will produce female-only hatchlings and further the species. If males become available once more, the females can easily transition to sexual reproduction and improve the survival rate of the species.

Can Cockroaches Reproduce On Their Own?

Many cockroach species, especially the American cockroach (Periplaneta americana), can reproduce without a mate.

There are over 4,500 species of roach in the world and about 51 in the United States. Across all of them, sexual reproduction is the favored approach. However, for a select few that researchers are still uncovering, they can create new generations without a mate.

The offspring will only come from the mother’s cells. All hatchlings will also be female. This was discovered by entomologists at the Hokkaido University in Japan. This is made possible through parthenogenesis.

Parthenogenesis is when an ovum can transform and begin the lifecycle without being fertilized. There are three main kinds of parthenogenesis found among invertebrates. These include:

American cockroaches are only able to reproduce with thelytoky parthenogenesis.

According to Advances In Genetics, each of these types of parthenogenesis occur for various species of animals and plants. These include the following:

Invertebrates are most likely to reproduce asexually. Only 80 vertebrate creatures are known to reproduce independently, and most of them are lizards or fish.

Researchers first thought that it was a last-ditch effort when females were unable to find males. However, further scientific studies have revealed that it can become a preferred method or a matter of convenience.

If a female has access to food, water, warmth, and safety, she may not want to leave this behind to find a mate. By using thelytoky parthenogenesis, she can create a colony and further the species on her own.

The group of entomologists from Hokkaido University studied tiny colonies made up of female-only cockroaches.

They observed that these females could reproduce several times. No input was required from males, and their presence wasn’t necessary to emit pheromones.

In sexual reproduction, the males usually release a chemical scent that entices the females to begin mating and reproducing. This study shows that females can decide to create another generation on their own.

Females will often continue their oviposition cycles, or egg-laying habits, at the same pace. The lack of males doesn’t prevent them from continuing to produce offspring.

Even baby cockroaches that are created asexually can reproduce without any ill effects.

If they’re subsequently paired with males, their eggs will be fertilized and hatch like normal. If they’re left alone, they’ll begin to reproduce asexually and create another generation.

The research team led by Dr. Hiroshi Nishino found that the original colony of 15 unmated females reproduced offspring for well over 3 years.

During the experiment, the number of descendants was over 1,000 from the initial group of cockroaches. Each one of the 1,000 cockroaches was female.

Even when resources are abundant, parthenogenesis enables cockroaches to grow a substantial colony. They can even colonize new areas at a rapid rate.

Scientists believe that millions of years of evolution are to thank for parthenogenesis in cockroaches.

In the above study of 1,000 descendants, that number later decreased from 1000 to 200 cockroaches. Further testing reduced their numbers. However, the lack of genetic diversity was also a limiting factor.

That’s because offspring produced asexually all come from the maternal egg cells alone. They don’t benefit from another parent’s unique genetics.

This would otherwise strengthen them against a wider range of microbiological harm. That factor is less of an issue for cockroaches created from sexual reproduction.

Nonetheless, scientists concluded that cockroaches could survive for several generations without mating. Once a future generation of females makes contact with male cockroaches, they can then reproduce sexually again.

How Do Cockroaches Reproduce?

According to the Journal of Insect Behavior, this chemical odor and oil entice the female into mounting and connecting her lower body to his. This is known as tergal contact.

Fertilization begins at this point. Once completed, the female will detach and go on her way. The sperm will enter the ovum, and the life cycle will begin. Most cockroaches are oviparous, so baby cockroaches will grow as eggs outside the body of the female.

The female will lay the eggs as an ootheca, which is an egg sac made of a thick membrane. It’ll contain the eggs and protect them from harm until they hatch.

She’ll carry the casing around on her body for 3-5 days. She’ll then deposit it on a flat surface in a dark, secluded place. Here, the eggs can incubate for several additional weeks until they hatch.

Do All Roaches Mate In The Same Way?

Mating will be different between species. The main steps are the same, but differences include:

For most cockroaches, the mothers aren’t involved in caring for their offspring. The nymphs are required to feed, rear, and protect themselves. If a male is involved, the father won’t assist his offspring.

If food becomes scarce or space is limited, the parents may eat their offspring.

This is true both in form and function. Cockroaches from different species won’t show any interest in each other. Even if they did, they would still encounter barriers, such as when:

Interbreeding can happen if cockroaches belong to the same genus.

Even in these rare cases, there have been issues with the offspring produced. They have shorter lifespans or are deformed if they hatch at all. In most cases, the eggs aren’t properly fertilized, and the result is non-viable.

Cockroaches don’t need to mate outside of their breed or species. Their numbers are abundant.

How Fast Do Cockroaches Reproduce?

A female cockroach can produce 8-16 oothecae and up to 300 eggs during her lifetime. There have been situations where she can produce even more eggs. However, the average number of eggs is 224 per female across all species.

At her peak, a female roach can lay 2 oothecae per week. German cockroaches have oothecae with the highest number of eggs, up to 50 in each capsule. The incubation time can range between species, with an average of 6 weeks.

It’s more common for cockroaches to reproduce sexually, but they can reproduce other females asexually. If no males are available, or it’s the female’s preference, she can reproduce through parthenogenesis.